“Virtually all of the violence against Jews in Western Europe has been from the Arab [Muslim] and [broader] Muslim population—virtually all.”—Elan Carr

U.S. Special Envoy to Monitor and Combat Antisemitism, Elan Carr, participated in a panel discussion of Antisemitism Tuesday evening, 9/10/19, sponsored by Bnai Zion, in Manhattan, which can be viewed in its entirety here. Addressing a question posed to him which was introduced by this tweet of mine and ADL data [here; here; here] I have written about extensively, for example here, which demonstrate the alarming excess prevalence (i.e., 2 to 4.5-fold all other religious groups or agnostics, studied) of extreme Muslim Antisemitism worldwide, Elan Carr became the first such Special Envoy to openly acknowledge the global pandemic of Muslim Antisemitism.

[Moderator, Rabbi Elie Abadie]: “Let me just introduce this section by saying that today (Tuesday 9/10/19) Andrew Bostom tweeted https://twitter.com/andrewbostom/status/1171393543925092352, he’s the author of The Legacy of Jihad, The Legacy of Islamic Antisemitism, Sharia Versus Freedom, –so he tweeted today that ‘The Islamic Society of North America [ISNA] conference featured Sanders, Bernie Sanders, and Linda Sarsour, promoted mainstream Islamic, Al-Azhar-endorsed manual on Islamic law*, which admonishes Muslims to wage jihad on Jews.’ [*“Reliance of the Traveller,” certified  by Sunni Islam’s Vatican equivalent, Al-Azhar University as conforming to the contemporary ‘practice and faith of the orthodox Sunni community.’] 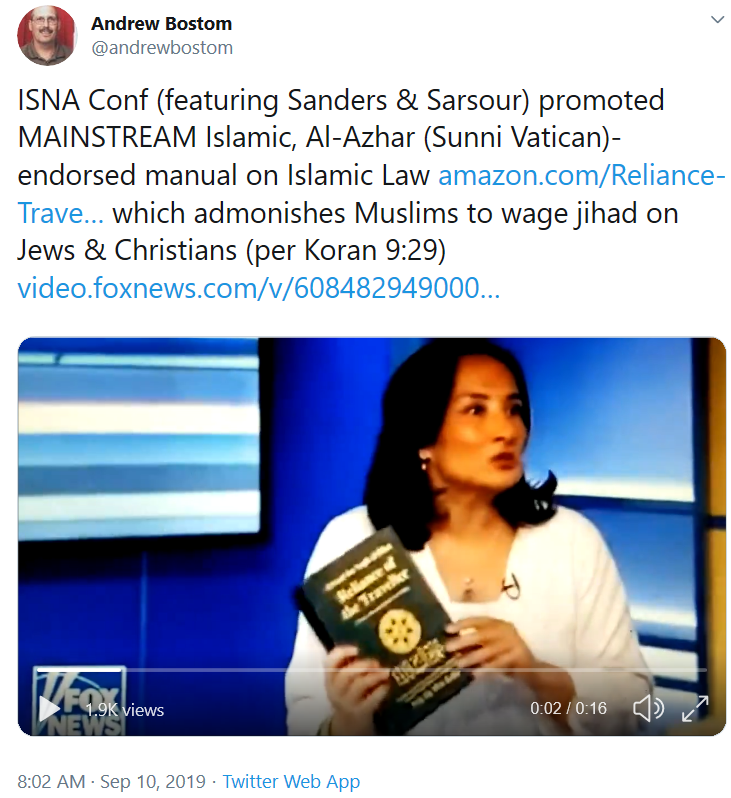 So, moving into Islamic Antisemitism, the ADL [Anti-Defamation League] study  survey of ~55,000 [see here] people shows—and these are the results of that study(ies), according to this question [reading index card query from the audience]—that based on agreement with [at least] six of all [i.e., eleven] Antisemitic statements, Muslims in Western Europe exhibit 49% to 68% rates of extreme Antisemitism versus 12% to 19% [actually to 29%] amongst other [i.e., non-Muslim] populations, a 2.o to 4.5-fold times greater percentage of Antisemitism than non-Muslims in those individual countries. Another result was that extreme Antisemitism among Muslims [i.e. worldwide, overall] measures 49%, versus 24% in Christians, and 21% for atheists, and so on. And also that the most—[a curiously irritated Deborah Lipstadt interrupts] ‘What’s the question?’—Rabbi Abadie continues—the most Antisemitic countries with rates of 74% to 93% are all in the Muslim countries in the Middle East. And the last one [i.e., ADL survey result] was that 34% of Muslims show extreme Antisemitism versus 14% of the general population, which is 2.4 times more than that average, in the United States. So the question is, I know most of our history dealt with Christian Antisemitism in Europe, and South America. Now we are in an era which Islam is very important, and there is a lot of Islamic Antisemitism. So let me start with you Elan. What are we going to be doing, how are we going to thwart that threat?” 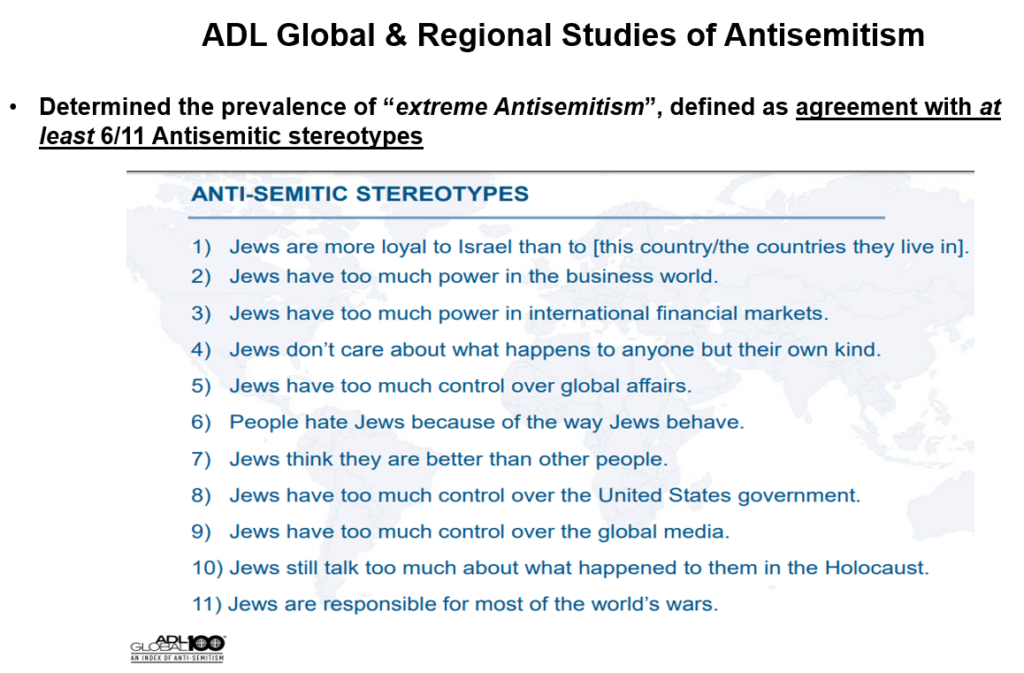 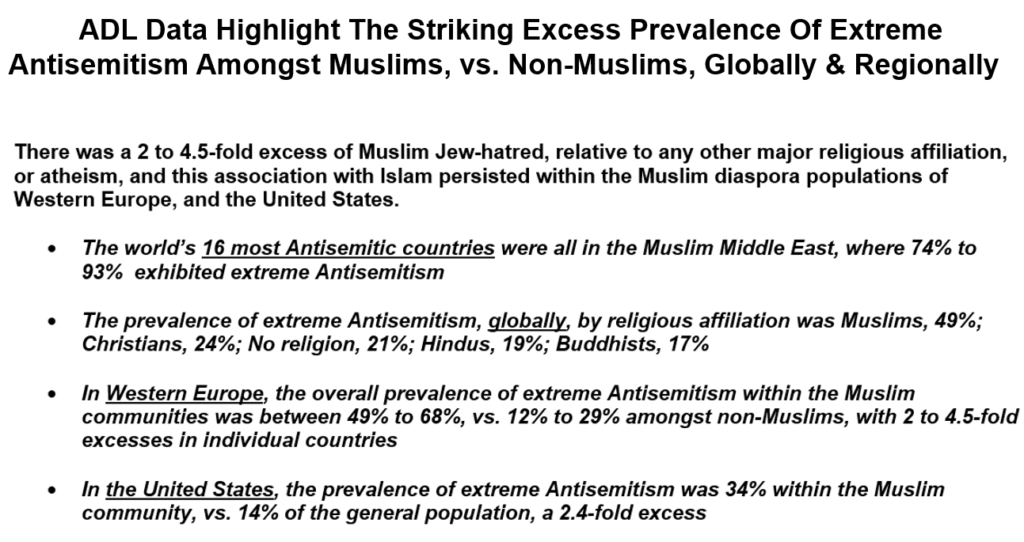 [Elan Carr]: “So, first of all, there is no question that’s the case [i.e., he acknowledged the ADL findings demonstrating a disproportionate prevalence of extreme Antisemitism amongst Muslims, worldwide]. Virtually all of the violence against Jews in Western Europe has been from the Arab [Muslim] and [broader] Muslim population—virtually all. So, we cannot ignore that fact, we can’t downplay that fact. That is, we’re stuck with it, and that is something we have to acknowledge.”