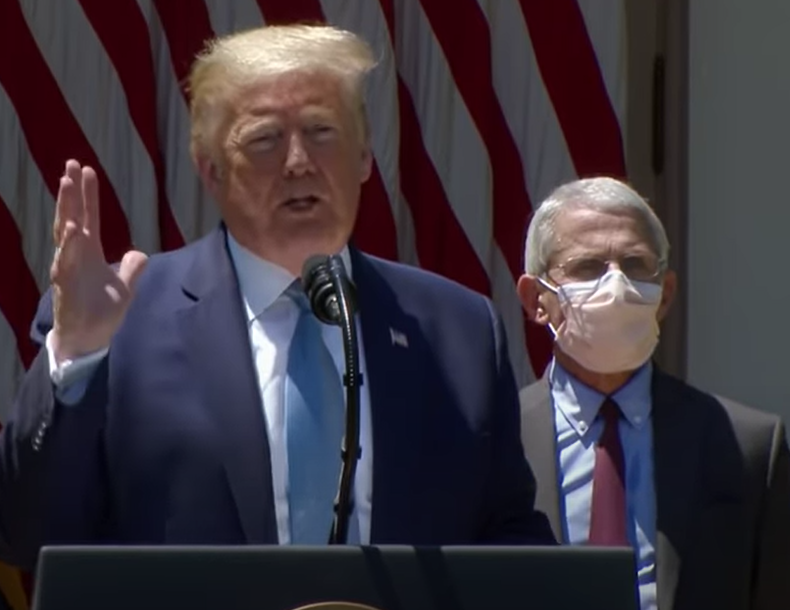 Dr. Anthony Fauci, eminence grise Director of the U.S. National Institute of Allergy and Infectious Diseases, is America’s most prominent and vocal advocate of continued covid-19 “lockdown” policies. Inured to Dr. Fauci’s strident promotion of such draconian lockdowns, it was still jarring to hear his cynical, fearmongering suggestion, during a Senate hearing, Tuesday, May 12th. Fauci maintained that what students “really want to know” about their own safety, vis-à-vis covid-19, and school re-openings, is the availability of an effective vaccine—impossible by this fall.

…the idea of having…a vaccine available to facilitate the re-entry of students into the fall term would be something that would be a bit of a bridge too far. We’re not talking about necessarily treating a student who gets ill but how the student will feel safe in going back to school. If this were a situation where we had a vaccine that would really be the end of that issue in a positive way. But…even at the top speed we’re going we don’t see a vaccine playing in the ability of individuals to get back to school this term. What they really want is to know if they are safe…

…With regard to going back to school, one thing left out of that discussion is mortality. Shouldn’t we be discussing what the mortality of children [i.e., with covid-19] is? The mortality for zero to 18 approaches zero. It almost approaches zero. Between 18 and 45, the mortality in New York [City] was 10 out of 100,000 [now 18/100,000, i.e., 0.018%, for those 18-44]. So really we do need to be thinking about that. We need to think what happened in Sweden where the kids kept going to school. The mortality rate [in Sweden] is less than France. Less than Italy, Less than Spain. Less than Belgium. Less than The Netherlands. About the same as Switzerland. [Note: Actually less than the U.S. with simple age-adjustment given Sweden’s older population]. Basically, I don’t think there’s anybody arguing that what happened in Sweden is unacceptable…I think one size fits all is ridiculous. We ought to be doing it [re-opening] school district by school district and the power dispersed because people make wrong predictions. The history will be wrong prediction after wrong prediction starting with (disgraced hypocrite Neil) Ferguson in England…As much as I respect you (Dr. Fauci), I don’t think you’re the end all…If we keep kids out of school for another year what’s going to happen [is that] the poor and underprivileged kids are not going to learn for a full year. I think we should look at our kids getting back to school. I think it’s a huge mistake if we don’t open the schools in the fall.

–A 5/11/20 JAMA report 46 from U.S. and Canadian Pediatric Intensive Care Units (PICUs) confirmed the rarity of serious pediatric covid-19 disease noting: “most PICUs across North America reporting no children admitted with this disease during the study period”; despite the fact that “more than 80% [of the small number admitted] had significant long-term underlying medical conditions”…most commonly “long-term dependence on technological support associated with developmental delay and/or genetic anomalies…overall survival and outcomes from critical illness in infants and children with COVID-19 was far better than reported for adult patients.” The authors concluded, “our data indicate that children are at far greater risk of critical illness from influenza than from COVID-19.”

–Stanford University Prevention Research Center’s Dr. John Ioannides, and colleagues, analyzed covid-19 mortality data as of April 4, 2020 from European countries and U.S. states, or major cities, with at least 250 [then] covid-19 deaths (total deaths included=25,692). An analysis pooling data from New York City, Italy, and the Netherlands, for example, revealed that only 0.9% of all deaths occurred in those < 65, without known underlying co-morbidities.

Moreover, Senator Paul’s limited time for discussion precluded mention of data repeatedly demonstrating–from Australia, The Netherlands, Switzerland, and France—that children, certainly those below 10-years old, are less likely to contract covid-19, and dramatically less prone to transmit the disease to others. Indeed, the journal Clinical Infectious Diseases (4/11/20) described a covid-19 infected 9-year old child, contact traced as part of a cluster of cases in the French Alps, who did not transmit the virus to 112 contacts at schools, or a ski class. “However” as the report noted,  “the high proportion of picornavirus and influenza infections among his contacts at the schools indicated transmission of those viruses within those settings.”

Although Dr. Fauci’s response to Sen. Paul closed with a grudging and passing concession to “the numbers” in children, his initial comments riveted upon what has been aptly characterized as pediatric panic porn(ography).

Right now children [are] presenting with covid-16 (sic), covid-19, who actually have a very strange inflammatory syndrome very similar to Kawasaki’s Syndrome [Disease]. I think we better be careful that we are not cavalier in thinking that children are completely immune to the deleterious effects. So again, I think you’re right in the numbers that children, in general, do much, much better than adults and the elderly…That’s why I am very reserved in making broad predictions.

Thus, even after Sen. Paul resoundingly debunked Fauci’s opening presentation alarmism, the NIAID Director had the temerity to raise the specter of “Kawasaki Syndrome” in children with covid-19, completely de-contextualizing this uncommon, and generally transient inflammatory condition’s well-established association to all manner of respiratory infections each year—including otherwise rather benign human coronaviruses that cause 15-30% of common colds! For example, a 2016 study published in one of the pre-eminent childhood illness journals, Pediatrics, found that 42% of 192 children admitted with Kawasaki Syndrome had a detectable respiratory infection, 7/192, or 3.6%, testing positive for one of three cold-causing human coronaviruses. Finally, a refreshingly sober 5/9/20 perspective on the ginned up covid19-Kawasaki Disease hysteria Dr. Fauci was content to fan, based upon review of 100 purported “cases,” concluded the syndrome was “rare, “children seem to improve rapidly,” “and children are probably still spared from most morbidities and mortality linked to COVID-19 infection.”

Contra the prevailing hard left-dominated “mainstream” media caricature, President Trump weighed in (during a 5/14/20 interview with Maria Bartiromo) thoughtfully, if firmly, on the matter of school re-opening, and rejected Dr. Fauci’s opinion:

[~2:37-3:01] Young people are very little affected by this (covid-19). We have to get the schools open…I totally disagree with him (Fauci) on schools.

Acknowledging the lethal havoc covid-19 had wrought upon the vulnerable elderly, “the elderly have been decimated,” the President added this reasonable caveat:

[~14;35-15:05] Open the schools. But if a teacher is 65 or older, especially if they have diabetes, if they have a bad heart, if they have a (medical) problem, we say relax for a longer period of time. But if you look, there’s been very little damage done to people that are healthy and young, and frankly medium age people.

Poisoned with their own deranged hatred of POTUS Trump, which renders them impenetrable by fact, “mainstream” media sneered its collective disapproval of his remarks (examples here; here: here).

When school closures were initially proposed to control an epidemic, planners had influenza in mind.  Flu spreading within schools and children are the main source for transmission in the community.  But COVID-19 is not the flu. Far fewer children are affected by COVID-19, and the number of transmissions from children to children and children to adults is far less… As an infectious diseases specialist, I have examined all of the available evidence from within Australia and around the world and, as it stands, it does not support avoiding classroom learning as a means to control COVID-19.

He concluded by contrasting these marginal to unknown “benefits” on covid-19 disease transmission, with the self-evident deleterious social effects of school closures:

Firstly, the disruption to routine and socialization, while temporary, tends to have a disproportionate effect on our more vulnerable children, including those with disability or particular learning needs.  School is a critical element of good health across all age ranges.  Secondly, it increases stress within the family environment, with parents having to juggle home schooling and work.  Sixty-two percent of Australian families have two working parents.  Parents extend their working day into the evening to compensate for the need to home school.