–Published evidence of the existence of specific cell-mediated immunity to covid19, not detected by antibody testing: 34% of healthy German blood donors, seronegative for SARS-Cov2 Abs, had T-cell-mediated immune activity possibly due to past exposure to ubiquitous human coronaviruses responsible for common colds.

“ We demonstrate the presence of S-reactive CD4+ T cells in 34% of SARS-CoV-2 seronegative healthy donors (HD)”… Healthy donor (HD) S-reactive CD4+ T cells reacted almost exclusively to the C-terminal epitopes that are a) characterized by higher homology with spike glycoprotein of human endemic “common cold” coronaviruses (hCoVs), and b) contains the S2 subunit of S with the cytoplasmic peptide (CP), the fusion peptide (FP), and the transmembrane domain (TM) but not the receptor-binding domain (RBD)…Our study demonstrates the presence of S-reactive CD4+ T cells in COVID-19 patients, and in a subset of SARS-CoV-2 seronegative HD. In light of the very recent emergence of SARS163 CoV-2, our data raise the intriguing possibility that pre-existing S-reactive T cells in a subset of SARS-CoV-2 seronegative HD represent cross-reactive clones raised against S-proteins, probably acquired as a result of previous exposure to HCoV. Endemic HCoV account for about 20% of“common cold” upper respiratory tract infections in humans. HCoV infections are ubiquitous, but they display a winter seasonality in temperate regions. Based on epidemiological data indicating an average of two episodes of common cold” per year in the adult population, it may be extrapolated that the average adult contracts a HCoV infection on average every two to three years. Protective antibodies may wane in the interim but cellular immunity could remain.” 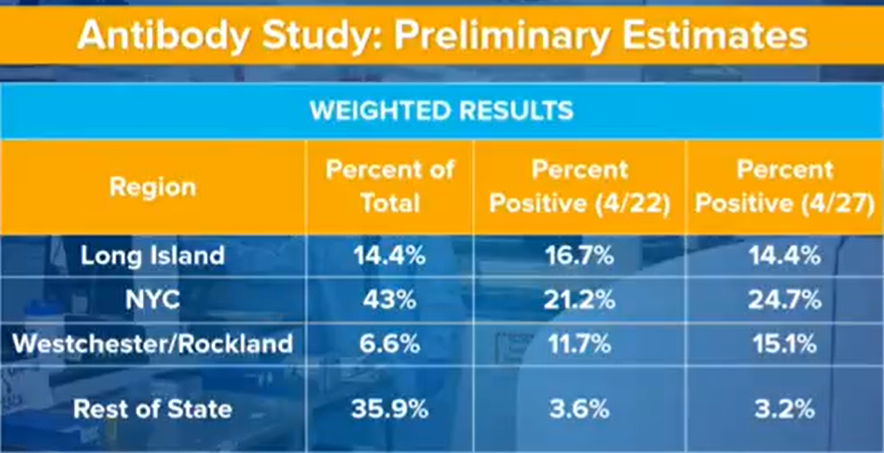 –Italy: SARS-Cov2+ seroprevalence among blood donors in N. Italian “red zone”–30% of blood donors from all 10 municipalities, while 66% (40/60) of asymptomatic donors were positive in 1 of towns under lock-down

*Edit: The U.S. covid19 case-fatality ratio per viral antigen throat swab testing as of 4pm Saturday, April 18th, used an erroneous denominator of those tested vs. positive tests (722,182 at this archived tallying website, for example, as the Johns Hopkins site does not archive accessibly). The actual CFR at that time= 37, 938 deaths/722,182 cases= 5.25%, (an even more) heavily biased estimate, as the detailed discussion reveals.*

Multi-billionaire software savant, Bill Gates—hardly the infectious (or any other) disease expert he fancies himself—commented with acid hysteria, several weeks ago (3/24/20), on the mere prospect of lifting draconian “covid19”, Wuhan coronavirus-related shutdowns, to reduce the economic havoc they have wrought:

“It’s very tough to say to people, ‘Hey, keep going to restaurants, go buy new houses, ignore that pile of bodies over in the corner. We want you to keep spending because there’s maybe a politician who thinks [gross domestic product] GDP growth is what really counts.”

Mr. Gates’ self-righteous fulmination, notwithstanding, his morbid, grotesque exaggeration, captures a widely prevalent, critical ignorance of the actual SARS-Cov2  (Severe acute respiratory syndrome coronavirus 2 of the genus Betacoronavirus, which causes Covid19 disease) virus’ lethality embodied in what is known as the infection, or case-fatality ratio (CFR).

Simply and accurately defined, the CFR is the ratio of the number dying from a severe infectious illness, the “numerator,” to the total number infected, the “denominator.” Clear evidence of infection, no matter how severe or mild (even unnoticed by the infected person), is determined, typically, by “immunoassay”, a blood “seroprevalence” test that measures the presence of so-called “antibodies” to an infectious agent such as SARS-Cov2. It is understandable, during the early throes of an outbreak like covid19 disease, that rapid tests which detect (ostensibly) “live virus antigen” (i.e., specific fragments of its genetic code “RNA”), in readily accessible body fluids (eg., from the throat, or mouth), among the most ill, are prioritized, often to the exclusion of blood seroprevalence antibody testing. However, this viral antigen methodology, and testing scheme, overrepresenting the severe cases, introduces profound biases which may vastly underestimate the “denominator” of total cases, especially the mildest, required for determining an actual CFR. Accordingly, as of 4:30pm, Saturday, 4/18/20, accepting at face value the gross over-counting of covid19 fatalities, absent appropriate validation by Centers For Disease Control (CDC), and individual state (glaringly, out of hospital deaths in New York, and Massachusetts) “guidelines”, the widely referenced Johns Hopkins Corona Virus Resource Center (JHCRC) tallied 37,938 deaths. Applying the concurrent JHCRC enumeration of covid19 cases relying solely on selective “live virus” testing, i.e., 4,690,482, yielded 37,938 deaths/ 4,690,482 cases, a CFR of 1.03%. (See correction at top of blog)

Contra these JHCRC tabulations, emerging covid19 case “denominator” findings from both an innovative, thoughtful analysis of U.S. CDC influenza-like illness (ILI) data for March 2020, and initial U.S. seroprevalence assessments (here; here; here), tell a different, less biased CFR story, one very consistent with the historical impact of pandemic influenza on the American population. The 1957-58 influenza A H2N2 virus pandemic, and its overall U.S. mortality, and CFR, provide useful benchmarks for comparison. Also originating (like SARS-Cov2) in China, the CDC estimated that just over 25% of the U.S. population then (census of ~ 170 million), some 45 million persons, were rapidly infected with the new virus between October, and November, 1957. Despite a vaccination program, there were ultimately 116,000 deaths, a resulting pandemic H2N2 influenza A CFR of 0.26% (116,000 deaths/45,000,000 infections).

Silverman and colleagues analyzed a decade of background non-influenza ILI, per CDC records, and identified a non-influenza ILI surge beginning the first week of March, 2020. They correlated this vast excess of ILI with established SARS-Cov2 proliferation patterns across U.S. states, indicating the surge was indeed due to the new virus, but orders of magnitude greater than the number of covid19 cases reported (i.e., as detected by viral antigen testing). After conservatively re-calibrating their estimates, these investigators calculated that some 8.7 million Americans were infected between March 8 and March 28, 2020. Moreover, when asked specifically about the current number (prevalence) of those infected in the U.S. (as of April 17-19, 2020), given covid19 cases dating back to January, 2020 (on 1/19/20, the first covid19 case was reported in WA state), lead investigator Silverman commented (14:48-15:05), “at least 10% of the U.S. population”—a minimum of ~33 million Americans infected (current U.S. population equaling 329.5 million). The CFR from these data, 37,938 deaths (per the JHCRC)/33,000,000 cases, or 0.11%—generates a current estimate for covid19 less than half the 0.26% CFR of the 1957-58 H2N2 influenza pandemic. As a final CFR comparison between the 1957-58 influenza, and current covid19 pandemics, we can use the latest (3/17/20) much ballyhooed Institute for Health Metrics and Evaluation (IHME) model estimate (the 6th iteration in under 3-weeks: 4/1; 4/5; 4/8; 4/10; 4/13; and 4/17) for covid19 deaths through August 4, 2020, and assume an equivalent number of infections, 45 million each. It is important to note the 4/17/20 IHME model no longer expects “full social distancing through May (2020).” Projecting 60,308 covid19 deaths/ 45,000,000 infections, yields a CFR of 0.13%, half the 1957-58 pandemic influenza CFR.

Appropriately, Silverman and colleagues have insisted that their CDC non-influenza ILI surveillance analyses be confirmed by seroprevalence studies. Albeit rather piecemeal, seroprevalence validation of their estimates is accumulating, from both early representative U.S. community samples, and less rigorous “convenience” samples (here; here; here). Additional independent confirmation of Silverman et al’s assessment of the scope of U.S. covid19 infections can be gleaned from viral antigen screening reports of patients presenting with ILI to urgent care facilities, asymptomatic (overwhelmingly) pregnant women admitted for delivery, and homeless populations (here; here). A bulleted summary of this cumulative evidence is provided below:

–A convenience sample of Chelsea, MA residents—excluding any who were viral antigen positive by nasal swab testing—demonstrated that 64/200, 32%, tested positive for SARS-Cov2 antibodies. A crude CFR from these limited data, assuming 32% of Chelsea’s population was actually infected (0.32 X 35,177= 11,257)/ 39 time period relevant covid19 deaths, = 0.35%.

–During late March, 2020 147/408 (36%) of Boston homeless shelter residents screened from a single large facility, tested positive for SARS-Cov2 by nasal swabbing. Less than 10% were symptomatic.

–As reported April 17, 2020, 49/114 (43%) of homeless residents at a Worcester emergency shelter screened SARS-Cov2 positive (presumptively by viral antigen testing). Most were asymptomatic, or with minimal symptoms.

One of the most striking features of covid19 disease is its overwhelmingly disproportionate lethality in those ≥ 65 years old, vs. those < 65. Stanford University Prevention Research Center’s Dr. John Ioannides, and colleagues, analyzed covid19 mortality data as of April 4, 2020 from European countries and U.S. states, or major cities, with at least 250 covid19 deaths (total deaths included=25,692). An analysis pooling data from New York City, Italy, and the Netherlands, for example, revealed that only 0.9% of all deaths occurred in those < 65, without known underlying co-morbidities. Given these findings and the more modest overall U.S. covid19 CFR based upon realistic population infection estimates (i.e., 0.13%), the CFR should be considerably lower still, in those < 65 years of age.

“If larger scale studies further document that the infection is very common and infection fatality rate is modest across the general population, the finding of very low risk in the vast majority of the general population has major implications for strategic next steps in managing the COVID-19 pandemic. Tailored measures that maintain social life and the economy functional to avoid potentially even deaths from socioeconomic disruption plus effective protection of select high-risk individuals may be a sensible option.”

Unaccompanied by mass economic lockdowns, the 1957-58 H2N2 influenza A pandemic—equal, at least, in virulence and lethality to the current covid19 pandemic—had only a negligible effect on the U.S. GDP, within the range of ordinary economic variability.

“If one assumes that the number of asymptomatic or minimally symptomatic cases is several times as high as the number of reported cases, the case fatality rate may be considerably less than 1%. This suggests that the overall clinical consequences of Covid-19 may ultimately be more akin to those of a severe seasonal influenza (which has a case fatality rate of approximately 0.1%) or a pandemic influenza (similar to those in 1957 and 1968)…”

Hope springs eternal Dr. Fauci will very soon short-circuit his own present cognitive dissonance. Let us pray Dr. Fauci openly acknowledges his concurrence with Dr. Ioannides both on the pandemic influenza-like CFR range of covid19, and its circumscribed lethality disproportionately targeting the elderly, and support accelerated easing of the economy-crushing lockdowns plaguing our country much more severely than the new virus.