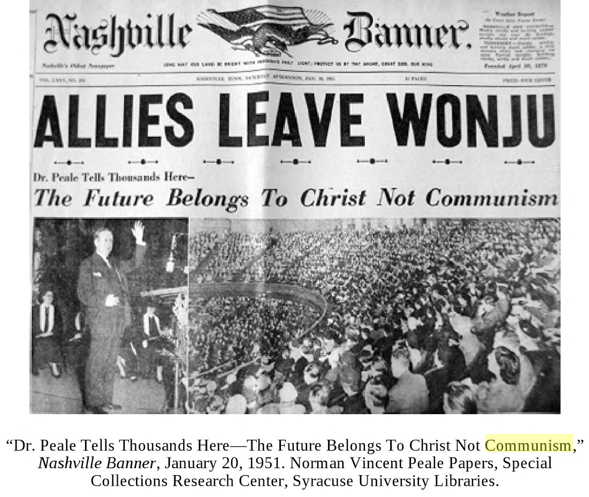 While campaigning at the Iowa Family Leadership Summit in July, 2015, Donald Trump gushed (7:20-8:20) about Norman Vincent Peale (d. 1993), his family’s pastor at the Marble Collegiate Church in Manhattan:

Norman Vincent Peale was my pastor—“The Power of Positive Thinking”—[Peale’s 1952 book]—Everybody has heard of Norman Vincent Peale? He was so great. He would give a sermon—you never wanted to leave—Dr. Norman Vincent Peale would give a sermon—I’m telling you—I still remember his sermons—He’d bring up real life situations—modern day situations into the sermon. And you could listen to him all day long. When you left the church you were disappointed it was over. He was the greatest guy. He wrote “The Power of Positive Thinking”— which was a great book.

Peale minced no words about where he stood on the totalitarian menace of Communism in his 1952 bestseller, penned at a critical juncture in the Cold War: “no one has more contempt for Communism than I have.” Indeed, a Nashville Banner, January 20, 1951 frontpage story featured coverage of an enormous anti-Communist rally, where Peale was the keynote speaker: “Dr. Peale Tells Thousands Here—The Future Belongs To Christ Not Communism”. David Brody’s 2018 biographical analysis, The Faith of Donald J. Trump: A Spiritual Biography , elaborates on Peale’s earlier opposition to collectivism more broadly, encompassing both Communism, and Fascism.  Two weeks after Trump’s birth in 1946, Peale opined in a newspaper column,

There are small-minded people who have the idea that to be a Christian today, one must lean way over to the left or right: either to take Communism on the one hand or something else on the other. For the life of me, I have never been able to understand how a man who regards himself as a leader of the Christian Church can attempt to deprecate the teachings of Jesus as to try and get them into the thinking of Karl Marx or of some Fascist. Those puny little fellows compared to the colossal mind of Jesus Christ, pale into mere insignificance.

Brody avers that Peale was also an “ardent” opponent of what he viewed as Franklin Roosevelt’s coercive New Deal era statism, and “demagoguery,” particularly when FDR sought a third presidential term.

A January, 2016 Washington Post story (notwithstanding the negative, tangential headline) riveted upon the warm, enduring relationship between the “Trump and Peale clans”:

Norman Vincent Peale presided at Donald Trump’s wedding to Ivana Trump. He also officiated at the wedding of Trump’s sister Maryanne. The mogul co-hosted the minister’s 90th-birthday bash… ‘The great Norman Vincent Peale was my minister for years,’ Trump told CNN last July, a sentiment he repeated in Atlanta and in Iowa during stops in Ames and Dubuque. Peale, for his part, described Trump as ‘kindly and courteous’ with ‘a streak of honest humility,’ and touted him as ‘one of America’s top positive thinkers and doers.’ The minister also called Trump ‘ingenious’ and predicted that he would be ‘the greatest builder of our time.’ Trump’s parents, Fred and Mary Trump, formally joined Peale’s Marble Collegiate Church in Manhattan — a venerable affiliate of the Reformed Church in America — during the 1970s. Trump visited Marble Collegiate with his second wife, Marla Maples.

While Donald Trump (in a 2009 Psychology Today interview) credited Peale’s The Power of Positive Thinking” for keeping his mindset optimistic after a series of setbacks, I believe Dr. Peale’s staunch anti-totalitarianism—especially his anti-Communism—influenced Trump’s own worldview. Trump’s 2000 “The America We Deserve”, is the best summary explication of the pro-freedom ideology which animates his foreign policy considerations.  Referring to what he designated “oppressive Communism,” Trump championed “western style democracy,” as his desired replacement for Communist totalitarianism in the collapsed former Soviet Union. Trump also decried the “disgrace” Castro’s Communism had wrought upon Cuba:

Terror reigns, the police are unrestrained; beatings and citizen disappearances are common, and all free expression outside the Communist Party is crushed.

More importantly, as has remained his wont, Trump was gimlet-eyed about the persistence—and danger—of entrenched Communism in a powerful China.

I break rank with many business colleagues and foreign policy gurus…in my unwillingness to shrug off the mistreatment of China’s citizens by their own government. My reason is simple: These oppressive policies make it clear that China’s current government has contempt for our way of life. It fears freedom because it knows its survival depends on oppression. It does not respect individual rights. It is still, at heart, a collectivist society. As such it is a destabilizing force in the world, and should be viewed that way.

Lastly, with remarkable prescience, Trump warned against ignoring totalitarian “Islamic fundamentalism,” given the complacency of those (like Fukuyama) espousing a then prevalent “end of history” narrative, which insisted the “victory of capitalism” had ushered in a “trouble-free era of peace and guaranteed prosperity.”