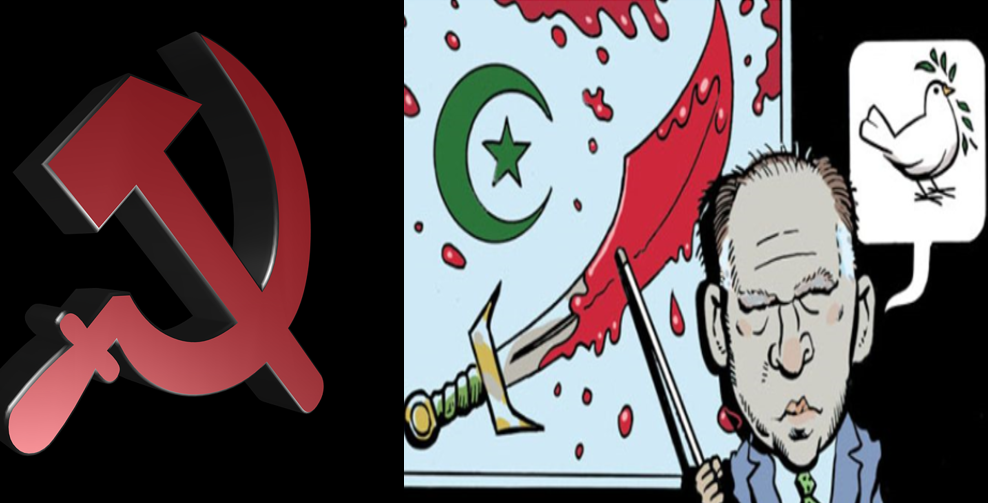 Five years before the October, 1917 Bolshevik Revolution would begin to impose Communist totalitarianism on Russia, Henry C. Vedder, observed in his 1912 study of Socialism, that the Marxist Social Labor Federation of Britain had adopted Karl Marx’s “Das Kapital” [Capital] as their infallible authority, “an article of faith from which they will permit no dissent, on pain of excommunication.” Vedder, a Professor of Church History at the Upland, Pennsylvania Crozer Theological Seminary, added that this British Marxist organization rejected the orthodoxy of its own votaries unless they professed as their creed, “There is no God, and Karl Marx is his prophet” — mirroring the Islamic declaration of faith, or “shahada”. The late doyen of Islamic studies, Bernard Lewis, underscored how this summation of the Communist creed captured the “real affinity” between totalitarian Communism, and Islam, in a 1954 essay.

Both groups [i.e., adherents of Islam or Communism] profess a totalitarian doctrine, with complete and final answers to all questions on heaven and earth; the answers are different in every respect, alike only in their finality and completeness, and in the contrast they offer with the eternal questioning of Western man. Both groups offer to their members and followers the agreeable sensation of belonging to a community of believers, who are always right, as against an outer world of unbelievers, who are always wrong. Both offer an exhilarating feeling of mission, of purpose, of being engaged in a collective adventure to accelerate the historically inevitable victory of the true faith over the infidel evil-doers. The traditional Islamic division of the world into the House of Islam and the House of War, two necessarily opposed groups, of which- the first has the collective obligation of perpetual struggle against the second, also has obvious parallels in the Communist view of world affairs…The call to a Communist Jihad, a Holy War for the faith—a new faith, but against the self-same Western Christian enemy…

John Brennan has admitted casting his 1976 POTUS vote for Communist Party (CP) of the USA leader Gus Hall. An ardent, unrepentant Stalin acolyte, who maintained the CPUSA as  “a bastion of Stalinist orthodoxy for four decades,” Gus Hall, circa 1976, was virulently anti-American, and an overt champion of the “liberating” hegemonic Soviet Communist terror state under Communist dictator (and Hall’s “Comrade”) Brezhnev. Hall articulated these views in a 1975 “Report to the 21st Convention of the Communist Party”:

Détente is not an agreement to accept, or to turn one’s head from oppression by [US] imperialism anywhere. Comrade Leonid Brezhnev made this clear in a public statement here when he stated: ‘The Soviet Union’s support for all national liberation struggles and movements is non-negotiable.’

Regarding Egypt, during the Anwar Sadat era, Brennan asked rhetorically,

[W]ould the ability to demonstrate effectively increase human rights and democracy in Egypt?

He responded to his own query,

In the light of the political environment, probably not. At the present stage of political development in Egypt widespread open opposition to the administration would be beyond the capacity of the system to handle.

Brennan then provided what was tantamount to a mealy mouthed apologetic for Egyptian human rights abuses:

Ignoring Islam’s antithetical concept of freedom as hurriyya—perfect slavery to Allah’s Sharia—Brennan’s thesis also argued that freedom “cannot be labeled as a Western idea,” and “is very much a part of Islamic culture.”  Hurriyya, “freedom,” is—as Ibn Arabi (d. 1240) the lionized “Greatest Sufi Master,” expressed it—“perfect slavery.” This conception, moreover, is not merely confined to the Sufis’ perhaps metaphorical understanding of the relationship between Allah the “master” and his human “slaves.” Following Islamic law (Sharia) slavishly throughout one’s life was paramount to hurriyya, “freedom.” This earlier more concrete characterization of hurriyya’s metaphysical meaning, whose essence Ibn Arabi reiterated, was pronounced by the Sufi scholar al-Qushayri (d. 1072/74).

Let it be known to you that the real meaning of freedom lies in the perfection of slavery. If the slavery of a human being in relation to Allah is a true one, his freedom is relieved from the yoke of changes. Anyone who imagines that it may be granted to a human being to give up his slavery for a moment and disregard the commands and prohibitions of the religious law while possessing discretion and responsibility, has divested himself of Islam. Allah said to his Prophet: “Worship until certainty comes to you.” (Koran 15:99). As agreed upon by the [Koranic] commentators, “certainty” here means the end (of life).

Fast forward to July 2010, as I described in an oped (entitled aptly, “Witless For the Defense”) emphasizing the  dangerous absurdity—and considering his 1980 MS thesis, three decades long tenacity—of Brennan’s uninformed Islamophilia. While then serving as the Obama administration’s chief counterterrorism adviser, I noted how Mr. Brennan,

vociferously advocates an exclusive, bowdlerized definition of jihad in the public discourse as “to purify oneself or one’s community,” lest the tender sensibilities of Muslims be offended. He further claims that, somehow, self-described jihadists “have truly just distorted the whole concept” of jihad. But it is Mr. Brennan who, irrespective of whatever flimsy, ahistorical rationale he provides, thoroughly misrepresents jihad – a living, bellicose Islamic institution that dates from the advent of the Muslim creed almost 14 centuries ago. The dangerous absurdity of Mr. Brennan’s jihad denial is self-evident…Alexis de Tocqueville, upon returning from America, where he famously analyzed and celebrated America’s nascent democracy, studied Islamic doctrine, which included an 1838 assessment of the Koran, in preparation for his visits to Algeria (in 1841 and 1846) while serving as a French parliamentarian. Tocqueville concluded: “Jihad, Holy war, is an obligation for all believers. … The state of war is the natural state with regard to infidels … [T]hese doctrines of which the practical outcome is obvious are found on every page and in almost every word of the Koran … The violent tendencies of the Koran are so striking that I cannot understand how any man with good sense could miss them.”

John Brennan’s useful idiocy for Stalinism and Sharia comports well with his central role in helping to orchestrate the manufactured “Trump-Russia collusion” faux narrative, which has evolved into a seditious, full-blown attempted putsch.