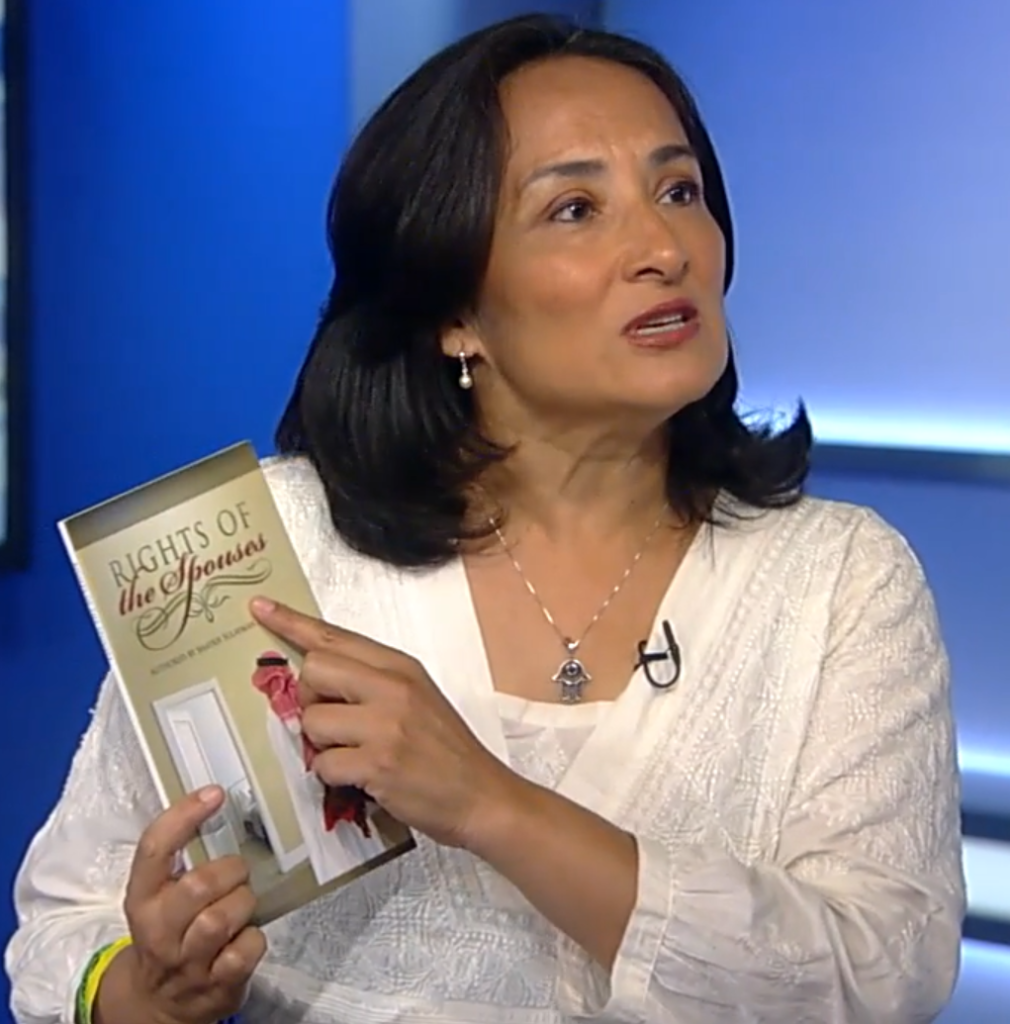 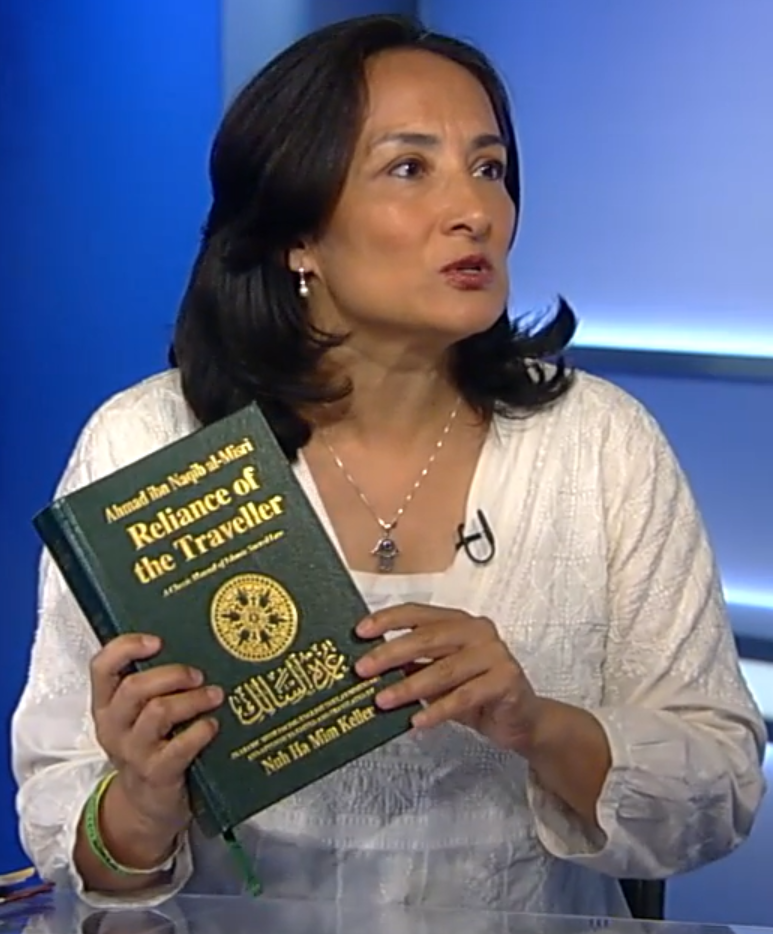 The first book Ms. Nomani presented, “Rights of the Spouses,” consistent with traditional Islamic law, and specific Koranic injunctions, endorsed the Muslim practice of polygamy (Koran 4:3), and the license granted Muslim men to beat their “disobedient” wives (Koran 4:34). On p. 7, the very first statement under the section entitled MARRIAGE IN ISLAM, supports the practice of polygamy:

Allaah has commanded marriage in His Book (the Koran). He said (citing Koran 4:3): “Marry women of your choice, Two or three or four; but if you fear that ye shall not be able to deal justly (with them), then only one…”

Wife beating is sanctioned on pp. 51 to 53, with the imprimatur of both Koran 4:34,  and a tradition (hadith) of Muhammad, followed by the author’s elaboration.

As to those women on whose part you see ill-­conduct, admonish them (first), (next), refuse to share their beds, (and last) beat them but if they return to obedience, seek not against them means (of annoyance). Surely, Allah is Ever Most High, Most Great.

Support for wife-beating is augmented by partial citation of the relevant portion of this canonical  tradition—which Muslims grade as “sahih”, “authentic”—on pp. 52-53:

Umar [the 2nd “Rghtly Guided Caliph”, and companion of Muhammad]  came to the Apostle of Allah and said: Women have become emboldened towards their husbands, he (the Prophet) gave permission to beat them.

Ms. Nomani also displayed the classical manual of Islamic Law, “Reliance of the Traveller,” certified  by Sunni Islam’s Vatican equivalent, Al-Azhar University as conforming to the contemporary “practice and faith of the orthodox Sunni community.” . Appropriately, Nomani highlighted the full chapter in this mainstream Islamic text on jihad, which urges Muslims to wage real world jihad against Christians, Jews, and Zoroastrians as articulated by the Koranic verse 9:29. Under the heading) “THE OBJECTIVES OF JIHAD,” Reliance of the Traveller proclaims (pp.599, 602):

Jihad means to war against non-Muslims, and is etymologically derived from the word mujahada, signifying warfare to establish the religion (Islam)..The caliph makes war upon Jews, Christians, and Zoroastrians (provided he has first invited them to enter Islam in faith and practice, and if they will not, then invited them to enter the social order of Islam by paying the non-Muslim poll tax (jizya; My note: from the etymology of the word, per Edward Lane, the great 19th century Arabic-English lexicographer, “the tax paid in lieu of being slain”)—in accordance with the word of Allah Most High, (Koran 9:29) “Fight against those who (1) believe not in Allah, (2) nor in the Last Day, (3) nor forbid that which has been forbidden by Allah and His Messenger (4) and those who acknowledge not the religion of truth (i.e. Islam) among the people of the Scripture (Jews and Christians), until they pay the Jizyah with willing submission, and feel themselves subdued

Moreover, given the time constraints of a television interview, Ms. Nomani could not allude to any of the following contents of “Reliance of the Traveller,”  which institutionalize other liberty-crushing, discriminatory, and dehumanizing Sharia legal codes, and mores, for non-Muslims, as well as Muslims, including (pp. 608, 595, 610, 611,617, & p.59):

—“Dhimmitude”, enforced legal and social inferiority for non-Muslims who survive their jihad conquest:

“pay the non-Muslim poll tax Jizya (per Koran 9:29); being “distinguished from Muslims in dress, wearing a wide cloth belt (zunnar); they “are not greeted with ‘as-Salamu ‘alaykum“; “must keep to the side of the street”; “may not build [homes] higher than or as high as the Muslims’”; “are forbidden to openly display wine or pork, to ring church bells or display crosses, recite the Torah or Evangel [Gospels] aloud, or make public display of their funerals and feast days, and are forbidden to build new churches”; “If non-Muslim subjects of the Islamic state refuse to conform to the[se] rules of Islam. or to pay the non-Muslim poll tax they are treated like prisoners of war,” i.e., killed, enslaved, ransomed, or possibly, released

—Muslims have no freedom of conscience, “apostasy”—and adultery, are death penalty offenses, the latter specifically by stoning; dehumanizing punishments of Muslims should be enforced for theft, and drinking alcohol;  and Muslim women should undergo female genital mutilation: “Leaving Islam is the ugliest form of unbelief (kufr) and the worst….When a person who has reached puberty and is sane voluntarily apostatizes from Islam, he deserves to be killed.”; “ the offender (adulterer) is stoned even in sever heat or cold…a pregnant woman is not stoned until she gives birth and the child can suffice with the milk of another”;  the thief’s “right hand is amputated whether he is a Muslim, or non-Muslim subject of the Islamic state”; “the penalty for drinking (alcohol) is to be scourged forty stripes…it may be administered with a whip”; “Circumcision is obligatory (for every female)…circumcision of the female is by cutting out the clitoris” (section e4.3). (NOTE: The English translation by Nuh Ha Mim Keller, p. 59, disguises the true harsher meaning of the Arabic text by offering the following altered and bowdlerized  English ‘translation’: “it consists for women, removing the prepuce (Ar. Bazr) of the clitoris (n: not the clitoris itself, as some mistakenly assert).”