Trump’s, Like Hoover’s “America First”: Pro-Freedom and Anti-Totalitarian By US Example

Posted on 21st January 2017 | Comments Off on Trump’s, Like Hoover’s “America First”: Pro-Freedom and Anti-Totalitarian By US Example 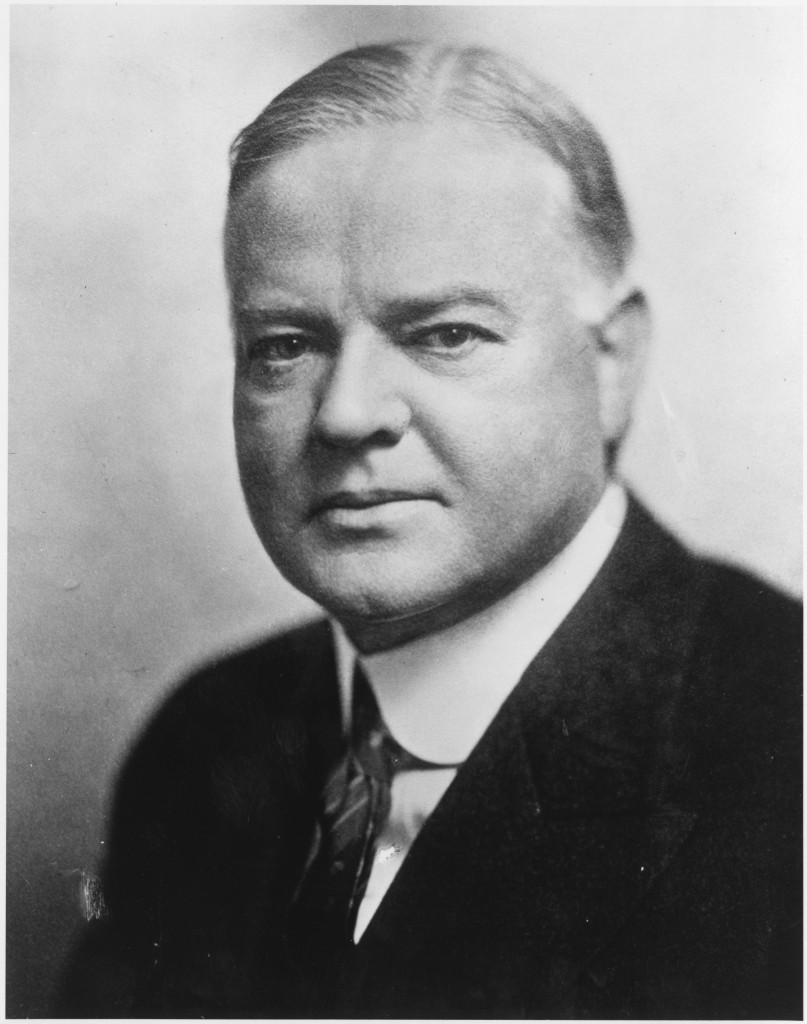 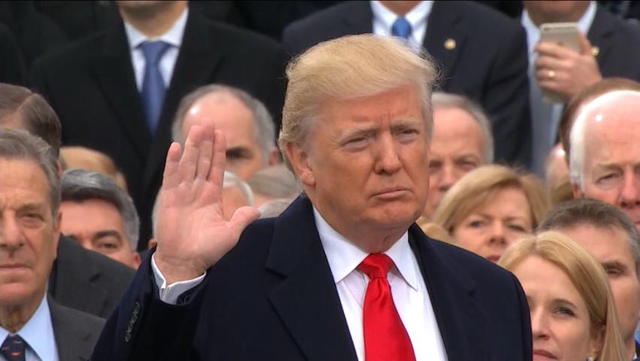 Donald Trump’s inaugural address was unabashed in putting forth his vision of “America First.” Grounded in commonsense economic populism, seeking to revive a moribund manufacturing sector, in particular, President Trump also maintained, with regard to foreign policy,

We do not seek to impose our way of life on anyone, but rather to let it shine as an example. We will shine for everyone to follow.

Reactions to this latter emphasis, especially, by sundry vacuous establishment media outlets, ranged from defamatory televised claims (“Hitlerian background”), to risible print assertions (the Obama Administration “fiercely opposed” Russian “territorial expansion”). These contentions, like so much of what is continuously promulgated by our uninformed, intellectually slothful, and doctrinaire media and “academic” elites, are rooted in falsehood.

Herbert Hoover (1874-1964), was America’s greatest humanitarian, and a remarkable patriot, who contributed 50 years of public service to the nation he loved, including the Presidency. As Hoover biographer Eugene Lyons observed in 1964,

Time has washed off the mud with which he was bespattered—fortunately while he was still alive and active. The granite of integrity underneath became obvious even to the less perceptive of his countrymen.

Notwithstanding the toxic brew of ignorance and mendacity which afflicts purveyors of conventional warped stereotypes, the true conceptualization of “America First”—a pro-American freedom, anti-Communist and anti-Nazi agenda—was articulated by Hoover during a nationwide address on June 29, 1941. Responding to FDR’s decision 2 days after Hitler’s invasion of the Soviet Union, that “the US would give all possible aid to Soviet Russia,” Hoover was alarmed by this “American association with the Communists in war.” Noting the tactical—and moral—incongruities of such aid to the predatory and murderous Soviet Communists under Stalin, Hoover observed in his memoir,

By Hitler’s diversion of his armies to Russia, the British had not only been made doubly safe from defeat, but could now even look toward the prospect of victory by Hitler’s exhaustion in his attack on Russia. Seven days previously Roosevelt had made an appeal to American youth to support his “four freedoms.” [i.e., freedom of speech; freedom of worship; freedom from want; freedom from fear]

The following are key, lengthy extracts from Hoover’s June 29, 1941 speech which put the lie to both deliberate and witless misrepresentations of this wise, patriotic, and liberty-championing World War II-era “America First” vision.

In the last seven days that call to sacrifice American boys for an ideal has been made as a sounding brass and a tinkling cymbal. For now we find ourselves promising aid to Stalin and his militant Communist conspiracy against the whole democratic ideals of the world…[I]t makes the whole argument of our joining the war to bring the four freedoms to mankind a gargantuan jest.

We should refresh our memories a little. Four American Presidents and [six] Secretaries of State, beginning with Woodrow Wilson, refused to have anything to do with Soviet Russia on the ground of morals and democratic ideals. They refused diplomatic recognition. They did so because here is one of the bloodiest tyrannies and terrors ever erected in history. It destroyed every semblance of human rights and human liberty; it is a militant destroyer of the worship of God. It brutally executes millions of innocent people without the semblance of justice. It has enslaved the rest. Moreover, it has violated every international covenant, it has carried on a world conspiracy against all democracies, including the United States.

When Russia was recognized by the United States in 1933, the Soviets entered into a solemn agreement that they would refrain from any propaganda, any organization, or from injuring in any way whatsoever the tranquility, prosperity, order, or security in any part of the United States. Seven years later, the Dies Committee reported unanimously and specifically that the Communist Party in the United States is a Moscow conspiracy, masked as a political party; that its activities constitute a violation of the Treaty of Recognition; that under instructions from Moscow, the Communists had violated the laws of the United States; that throughout the entire time they had been supplied with funds from Moscow for activities against the American people and the American Government. The Dies Committee only confirmed what most Americans already know. Is the word of Stalin any better than the word of Hitler?

In these last weeks it is declared not only by public officials but by labor leaders themselves that the strikes which hamstring the defense of the United States have been Communist conspiracies. Thus Russia has continued her mission of destroying our democracy down to last week.

Less than two years ago, Stalin entered into an agreement with Hitler through which there should be joint onslaught on the democracies of the world. Nine days later Stalin attacked the Poles jointly with Hitler and destroyed the freedom of a great and democratic people. Fourteen days later, Stalin destroyed the independence of democratic Latvia, Lithuania, and Estonia. Ninety days later on came the unprovoked attack by Russia on democratic Finland. Is that not aggression and is not every case a hideous violation of treaties and international law?

Stalin has taken advantage of the very freedoms of democracy to destroy them with the most potent fifth column in all history. He contributed to the destruction of France. He has daily implanted class hate in America and a stealthy war against our institutions.

We know also Hitler’s hideous record of brutality, of aggression and as a destroyer of democracies. Truly, Poland, Norway, Holland, Belgium, Denmark, France, and the others are dreadful monuments.

One of the real compensations America received for our enormous sacrifice in the last war [World War I] was from the large part we played in establishing the democracies of Finland, Poland, Estonia, Latvia, and Lithuania. We nursed them in their infancy. We spent hundreds of millions to help them grow to manhood. Does America feel quite right about aiding Stalin to hold his enslavement of them? That is where power politics will carry us. No doubt we will promise to aid Russia. But the war to bring the four freedoms to the world will die spiritually when we make that promise. If we go further and join the war and we win, we have won for Stalin the grip of Communism on Russia, the enslavement of nations, and more opportunity for it to extend in the world. We should at least cease to tell our sons that they would be giving their lives to restore democracy and freedom to the world.

Practical statesmanship leads in the same path as moral statesmanship. These two dictators—Stalin and Hitler—are in deadly combat. One of these two hideous ideologists will disappear in this fratricidal war. In any event both will be weakened. Statesmanship demands that the United States stand aside in watchful waiting armed to the teeth, while these men exhaust themselves. Then the most powerful and potent nation in the world can talk to mankind with a voice that will be heard. If we get involved in this struggle, we, too, will be exhausted and feeble. To align American ideals alongside Stalin will be as great a violation of everything American as to align ourselves with Hitler. Can the American people debauch their sense of moral values and the very essence of their freedom by even a tacit alliance with Soviet Russia? Such an alliance will bring sad retributions to our people. If we go into this war we will aid Stalin to hold his aggression against the four little democracies. We will help him to survive and continue his terror and his conspiracies against all democracies. We should stop the chant about leading the world to liberalism and freedom. Again I say if we join the war and Stalin wins, we have aided him to impose more Communism on Europe and the world. At least we could not with such a bedfellow say to our sons that by making the supreme sacrifice, they are restoring freedom to the world. War alongside Stalin to impose freedom is more than a travesty. It is a tragedy…

[L]et me propose for reasoning people a course for us at this time which avoids the most destructive forces and holds fast to the most constructive forces. And that program is neither defeatist, nor isolationist…We should give every aid we can to Britain and China…Arm to the teeth for defense of the Western hemisphere…Here in America today is the only remaining sanctuary of freedom, the last oasis of civilization and the last reserve of moral and economic strength. If we are wise, these vales can be made to serve all mankind.