May 29, 1453: Remembering the Mass-Murderous Jihad Conquest of Constantinople, Via Confirmatory Turkish and Christian Chronicles

Posted on 29th May 2017 | Comments Off on May 29, 1453: Remembering the Mass-Murderous Jihad Conquest of Constantinople, Via Confirmatory Turkish and Christian Chronicles 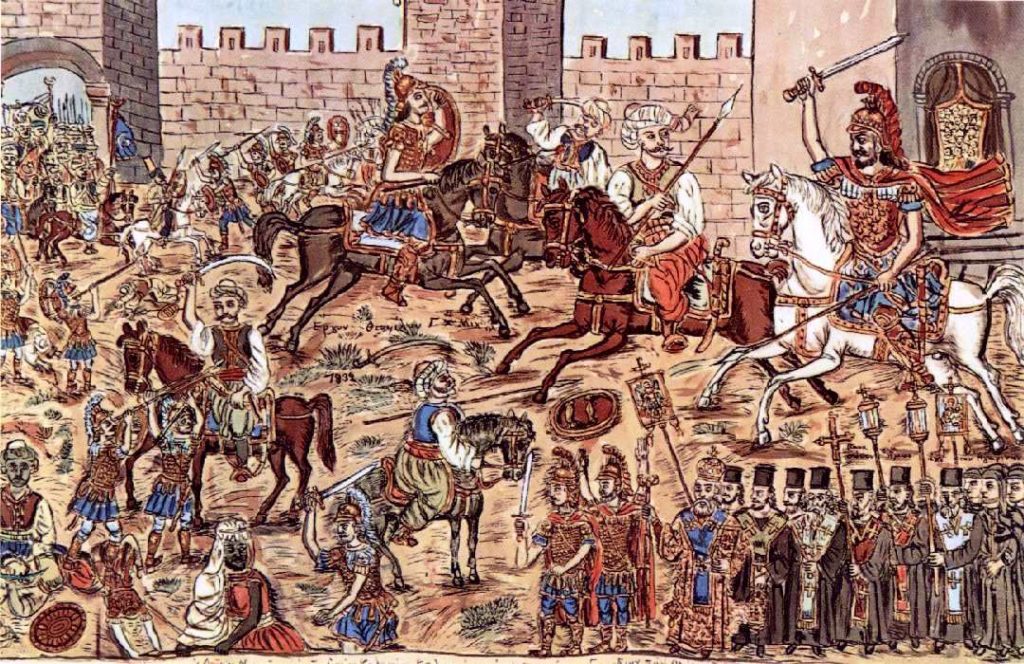 [Both Turkish and Christian chroniclers provide graphic evidence of the wanton pillage and slaughter of non-combatants following the Ottoman jihad conquest of Constantinople in 1453. First from the Turkish sources]:

“Sultan Mehmed (in order to) arouse greater zeal for the way of God issued an order (that the city was to be) plundered. And from all directions they (gazis) came forcefully and violently (to join) the army. They entered the city, they passed the infidels over the sword (i.e. slew them) and…they pillage and looted, they took captive the youths and maidens, and they took their goods and valuables whatever there was of them…” [Urudj]

“The gazis [jihadists] entered the city, cut off the head of the emperor, captured Kyr Loukas and his family…and they slew the miserable common people..They placed people and families in chains and placed metal rings on their necks.” [Neshri]

[Speros Vryonis, Jr. has summarized the key contents of letters sent by Sultan Mehmed himself to various Muslim potentates of the Near East]:

“In his letter to the sultan of Egypt, Mehmed writes that his army killed many of the inhabitants, enslaved many others (those that remained), plundered the treasures of the city, ‘cleaned out’ the priests and took over the churches…To the Sherif of Mecca he writes that they killed the ruler of Constantinople, they killed the “pagan” inhabitants and destroyed their houses. The soldiers smashed the crosses, looted the wealth and properties and enslaved their children and youths. ‘They cleared these places of their monkish filth and Christian impurity’…In yet another letter he informs Cihan Shah Mirza of Iran that the inhabitants of the city have become food for the swords and arrows of the gazis; that they plundered their children, possessions and houses; that those men and women who survived the massacre were thrown into chains.”

[The Christian sources, include this narrative by Ducas who gathered eyewitness accounts, and visited Constantinople shortly after its conquest]:

“(Then) the Turks arrived at the church [the great church of St. Sophia], pillaging, slaughtering, and enslaving. They enslaved all those that survived. They smashed the icons in the church, took their adornments as well as all that was moveable in the church…Those of (the Greeks) who went off to their houses were captured before arriving there. Others upon reaching their houses found them empty of children, wives, and possessions and before (they began) wailing and weeping were themselves bound with their hands behind them. Others coming to their houses and having found their wife and children being led off, were tied and bound with their most beloved…They (the Turks) slew mercilessly all the elderly, both men and women, in (their) homes, who were not able to leave their homes because of illness or old age. The newborn infants were thrown into the streets…And as many of the (Greek) aristocrats and nobles of the officials of the palace that he (Mehmed) ransomed, sending them all to the “speculator” he executed them. He selected their wives and children, the beautiful daughters and shapely youths and turned them over to the head eunuch to guard them, and the remaining captives he turned over to others to guard over them…And the entire city was to be seen in the tents of the army, and the city lay deserted, naked, mute, having neither form nor beauty.”

[From the contemporary 15th century historian Critobulus of Imbros:]

“Then a great slaughter occurred of those who happened to be there: some of them were on the streets, for they had already left the houses and were running toward the tumult when they fell unexpectedly on the swords of the soldiers; others were in their own homes and fell victims to the violence of the Janissaries and other soldiers, without any rhyme or reason; others were resisting relying on their own courage; still others were fleeing to the churches and making supplication- men, women, and children, everyone, for there was no quarter given…The soldiers fell on them with anger and great wrath…Now in general they killed so as to frighten all the City, and terrorize and enslave all by the slaughter.”