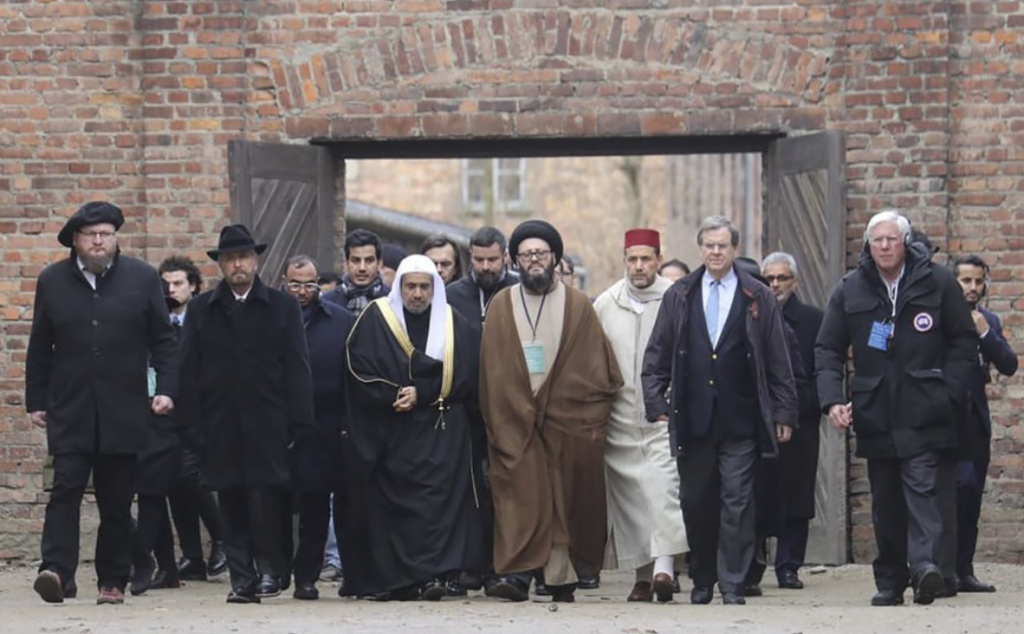 Whether one considers the masses of Muslims who have been flowing into Europe as (primarily) economic refugees, proud hijra colonists “quietly” Islamizing the continent, or both, these newly arrived votaries of Islam express an unabashed Islamic Jew-hatred. Their virulently anti-Jewish attitudes are consistent with the disproportionate ~3-fold increased rate of extreme Antisemitism among Western European Muslims, in general, relative to non-Muslims, just reported November 21, 2019 in the latest comprehensive Anti-Defamation League survey findings. Germany’s failed attempt to mollify this new Muslim immigrant animus toward Jews by “sensitivity” visits to Nazi-era concentration camp memorials demonstrates its deep-seated intractability.

“The spectacle of brutality on display at Sachsenhausen did not awe [Syrian Muslim] Jamo, a former photographer who had known daily violence in Syria. No matter the direct perpetrator of the violence Jamo had witnessed, the greatest cause of conflict in the region, he said, was Israel…’The Arabs think what Hitler did was a good thing, because he freed them from the Jews.’”

The depressing failure to lessen Jew-hating sentiments in these grassroots Muslims—where it counts—through Holocaust charnel house visits, has garnered little attention. Contrast that with the much ballyhooed pilgrimage to Auschwitz by what was characterized as “the most senior Islamic leadership delegation” to visit the location of a Nazi German death camp. This interfaith junket, spearheaded by Saudi “reformist” secretary general of the Muslim World League (MWL), Mohammad bin Abdulkarim al-Issa, and the CEO of the American Jewish Committee (AJC), David Harris, took place four days before the 75th anniversary of the camp’s January 27, 1945 liberation.

Far less widely reported, Al-Issa’s Muslim delegation was on a broader Holocaust immoral equivalence, and Muslim proselytization tour to “several sites of injustice”, including Srebrenica, Bosnia. There, during 1995, a tit for tat massacre of Bosnian Muslims—bearing no relationship in either scale, or single-target, monomaniacal hatred to the Nazi Holocaust destruction of European Jewry–took place during a bloody civil war between the region’s Serbs and Muslims. Here is the al-Issa/MWL tours’ stated purpose, as described in Asharq Al-Awsat:

“The visit of the Islamic delegation confirms the Islamic values and asserts that Muslims condemn every criminal act. The Islamic leaders will visit the sites and affirm that Islam is a religion of mercy and fairness and that it is against all malicious practices, adding that this is not limited to Muslims, but involves everyone. A large number of senior scholars of the MWL participated in various efforts to explain Islamic justice in its related positions, during several visits, meetings, initiatives, and declarations. This was reflected in the positive image of Islam and Muslims against all forms of extremism and radicalization.”

Moreover, in Saudi Arabia, al-Issa, despite being dubbed the so-called “new face of Saudi Wahhabism,” is viewed with understandable skepticism by genuine Saudi reformers. Political scientist Stephane Lacroix, who studies Islamic authoritarianism within Saudi Arabia and the Gulf States, has noted,

“As one Saudi intellectual said: ‘How can one take Muhammad al-Issa’s statements seriously when Religious bookstores in Riyadh are full of books advocating the exact opposite?’”

“…makes MBS’s (and al-Issa’s) religious reforms look more like a public relations stunt than a genuine transformation. No such transformation can happen without an open and frank debate about the Wahhabi tradition—and this is precisely what MBS is not willing to have.”

Returning to al-Issa’s 1/23/20 Auschwitz junket, and unpacking his statements about the Holocaust, since 2018, demonstrates his rather odious expropriation of the Holocaust’s legacy for Muslim propaganda purposes.

Al-Issa’s putatively “landmark” January 25, 2018 letter to the Director of the U.S. Holocaust Museum, Sara Bloomfield, although decrying the Holocaust as “among the worst crimes ever,” was devoid of any reference to Jews as the victims, yet managed to emphasize, “True Islam is against these crimes.” Al-Issa added, mendaciously, and contra Islam’s Sharia mandates for all non-Muslims, and their historical application across 14 centuries, till now, that “Islam has, through long centuries, coexisted with all religions, and respected the dignity of its [sic; their?] followers”. Last April 30, 2019, in a “memorandum of understanding” with the AJC unveiling the then planned visit to Auschwitz, al-Issa denounced the “heinous attacks in Pittsburgh​, Pennsylvania, in Christchurch, New Zealand, and most recently in Sri Lanka.” Al-Issa’s comments, however, ignored the endless paroxysms of violence by Muslims directed at the Jews of Israel, and the excessive, if more sporadic ongoing, Muslim attacks on European, and American Jews. He also refused to acknowledge, let alone condemn, mainstream, institutional Islam’s continuous espousal of canonical Islamic Jew-hatred, and the resulting grossly disproportionate rates of extreme Muslim Antisemitism, and Muslim anti-Jewish violence, worldwide.

There has been a longstanding refusal of Muslim leaders such as al-Issa to recognize the World War (WW) II-era Nazi collaboration—punctuated with overt calls for Jew-annihilation, by jihad—of arguably the most influential Muslim of that era: the jihadist, Caliphate-championing “godfather” of the Palestinian Muslim movement, Hajj Amin el-Husseini. Contemporary Muslim leaders of al-Issa’s ilk have proven equally incapable of acknowledging how Muslim leaders such as Anwar Sadat admired Hitler even after WWII, or how post-WWII, escaped Nazis—many of whom converted to Islam (most notably, Johannes “Omar Amin” von Leers, whose conversion el-Husseini himself oversaw!), were granted asylum, particularly in Egypt, and contributed to the incessant Muslim jihad campaigns to destroy Israel, and annihilate its Jews, from 1948, through (at least) 1973.

That reprehensible legacy of Muslim denial continues, and now has been extended to real time ignoring of the current global pandemic of Muslim Jew-hatred, and anti-Jewish violence. This Muslim caricature of “Holocaust remembrance” further cynically equates the systematic Nazi annihilation of 6-million Jews during the Shoah, with the Srebrenica murders of perhaps 7,000 Muslims during the 1990s Muslim-Serb civil war in Bosnia, a conflict rife with reprisal killings.

What ordinary, sensible Jews should “Never Forget” is that what passes for “Jewish leadership” proudly orchestrated this hideous spectacle of mutual Jewish-Muslim denial.