Yesterday, November 21, 2019, the ADL released its 2019 survey data on the prevalence (occurrence) of extreme Antisemitism (defined, below) within 18 countries assessed between April 15 and June 3, 2019. Six of these countries—Belgium, The United Kingdom, Germany, Spain, France, and Italy—included a Muslim over-sample, allowing for a direct comparison of Muslims vs. Christians, those professing no religion, and the overall populations.

As ADL’s own press release stated:

In sadly typical fashion, however, the ADL downplayed these findings in its press release, effectively concealing them as the last of six bullet points, i.e., # 6 of 6.

In brief, the ADL presents respondents with the following questionnaire:

Jews have too much power in the business world

Jews have too much power in international financial markets

Jews have too much control over global affairs

Jews have too much control over the United States government

Jews think they are better than other people

Jews have too much control over the global media

Jews are responsible for most of the world’s wars

People hate Jews because of the way Jews behave”

The “Index Score” determining the occurrence of “extreme Antisemitism” in each population surveyed is calculated as follows:

“survey respondents who said at least 6 out of the 11 statements are ‘probably true’ are considered to harbor anti-Semitic attitudes. The Index Score for each country represents the percentage of adults in that specific country who answered ‘probably true’ to a majority (i.e., at least 6/11) of the anti-Semitic stereotypes tested”

I have tabulated the data from the 6 Western European countries which included a Muslim oversample, Belgium, United Kingdom, Italy, France, Spain, and Germany, just below.

Predictably, this disproportionate occurrence of extreme Muslim Antisemitism within Western Europe has begotten an excess of Muslim violence targeting Jews. A lone study of its kind (conducted by FRA – European Union for Fundamental Rights, in 2012) queried Jewish victims directly about the identity of those who attacked them, or threatened them with violence, asking them to recall their past 5-year experiences:

“Thinking about the incident where somebody attacked or threatened you in a way that    frightened you because you are Jewish – who did this to you?”

Compared for example, to those with “extremist right wing views”, the excess rate of Muslim violence or violent threats ranged anywhere from 3- to 13-fold! Indeed other than in Germany, where the percentages of left wing vs. right wing attacks were essentially equal, left wing Antisemitic violence or threatened violence also exceeded right wing Antisemitic violence, or threatened violence.  Violent acts or threats perpetrated by those with “Christian extremist” views were negligible, in absolute terms, and even more so relative to those dubbed “Muslim extremists”. 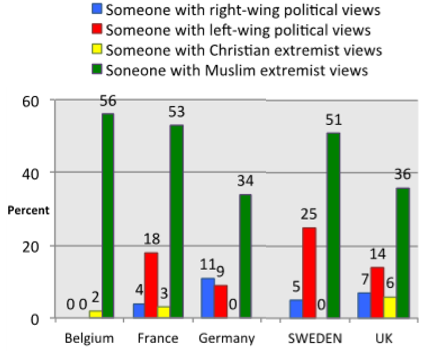 Cardiologist Vera Kosova, a German Jewish immigrant from Uzbekistan, provided these balanced, pellucid insights on such findings when interviewed recently at the Frankfurt Book Fair, 10/19-20/19 (posted with English subtitles 11/7/19):

“It is important that the Antisemitism debate be led openly, honestly and broadly. There’s a right-wing Antisemitism; there’s a left-wing Antisemitism, and there is Muslim Antisemitism. Muslim Antisemitism clearly dominates in the statistics, and also does especially among the surveys done among the Jews. The German police crime statistics don’t apply, because they do not represent the reality. That’s because as soon as the perpetrator cannot be clearly identified the crime is assigned to the ‘right’ end of the spectrum. We’re not going to solve these problems in this country by doing this, and that’s certainly not going to stop Antisemitism.”

Tantawi, arguably the greatest modern commentator on the Koran, in addition to serving as Al-Azhar Grand Imam from 1996 until his death in 2010, provided this summary gloss on the Koranic depiction of Jews, emphasizing its timeless relevance:

(The) Koran describes the Jews with their own particular degenerate characteristics, i.e. killing the prophets of Allah (see Koran 2:61/ 3:112 ], corrupting His words by putting them in the wrong places (4:46) , consuming the people’s wealth frivolously (4:161), refusal to distance themselves from the evil they do (3:120; 5:79), and other ugly characteristics  caused by their deep-rooted (lascivious) envy (2:109)…only a minority of the Jews keep their word…[A]ll Jews are not the same. The good ones become Muslims (Koran 3:113), the bad ones do not.

Tantawi’s successor, current Al-Azhar Grand Imam Ahmed al-Tayeb, shares Tantawi’s Jew-hating virulence. Al-Tayeb has labeled the Jews eternal Koranic enemies (per Koran 5:82), blamed Jews for the rise of ISIS and other jihadist groups, and claims “the issue of Antisemitism is a lie.”

Not surprisingly, both Tantawi and Tayeb (then Al-Azhar Mufti) sanctioned homicide bombing against Israel’s Jews even in the immediate aftermath of the horrific Netanya Passover massacre in April, 2002.

Such “sacralized” hatred, preached authoritatively by the avatars of institutional Islam, continues to fuel the global pandemic of Muslim Antisemitism, and is being promulgated, unchallenged. The abject failure of Jewish and other religious and civic leaders to denounce this institutionalized Islamic Jew-hatred is a lingering disgrace.