A “Khamenei-ist”, Versus Modern Shiism’s Most Important Koranic Commentator, on Koran 9:29, and 5:82 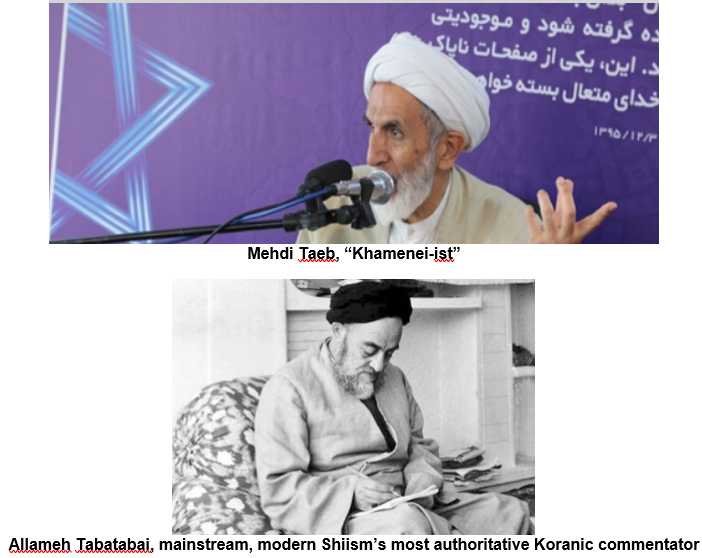 Koran 9:29, and 5:82 are central Koranic verses, whose classical, authoritative interpretations, respectively, elucidate Islam’s timeless jihad war to submit Jews and Christians to the Sharia, and rationalize eternal Muslim animus toward the Jews.

A report by Middle East Media Research Institute (MEMRI) published 1/27/20, seeking to illustrate “antisemitic statements at the core of the Iranian regime,” riveted upon Mehdi Taeb, “head of the Ammar Headquarters think tank that advises Iranian Supreme Leader Ali Khamenei, a close associate of Khamenei himself, and the brother of the Iran’s Islamic Revolutionary Guard Corps (IRGC)’s intelligence chief Hossein Taeb.” MEMRI extracted comments from a late 2018 six-part lecture series Mehdi Taeb delivered, and statements he made at the “Consultation and Clarification on Ways to Confront the Zionists” conference in 2019.

Ostensibly, in sharp contrast to mere Iranian regime apparatchik Taeb, stands the most important Shiite Koranic commentator of the modern era, Muhammad Husayn Tabatabai. Allameh is an honorific title for great scholars of Islamic jurisprudence. The mainstream Islamic Studies academy—both Western and Iranian—has designated Allameh Sayyid Muhammad Husayn Tabatabai the leading modern Shiite religious scholar and philosopher, dubbing him a “theosopher.” Tabatabai’s al-Mizān fi tafsir al-Qurʾān “The measure of balance/ justly held scales in the interpretation of the Quran,” a 21-volume Arabic opus, is regarded as the most important contemporary Shiite Koranic commentary. Allameh Tabatabai University, named in honor of this celebrated Shiite authority and “theosopher,” is the largest specialized state social sciences university in Iran and the Middle East, with 17,000 students and 500 full-time faculty members. Affirming his continued lofty stature, and relevance, an Iranian national conference was held on May 3, 2012, in Qom, dedicated to “recognizing the interpretative methods and principles used by Allameh Tabatabaee [Tabatabai] in [his Koranic] exegesis.”

Below, are Taeb’s observations on Koran 9:29, and 5:82, followed by Tabatabai’s authoritative glosses on these same verses from his seminal modern commentary, al-Mizan.

[Taeb on 9:29] “The Quran determines that the Jews must be humiliated; the jizya poll tax must be taken from their hands, not by means of an emissary or any technological means because in those ways there is no humiliation. [Quran] 9:29 [states]: ‘Fight those who do not believe in Allah or in the Last Day and who do not consider unlawful what Allah and His Messenger have made unlawful and who do not adopt the religion of truth from those who were given the Scripture – [fight] until they give the jizyah willingly while they are humbled.’ Allah wants to keep this group under the control of the believers [i.e. the Muslims] – why? Because it is a group with demands that exploits opportunities. The moment they have an opportunity, they act to destroy others…Should this group, called the Jews, abandon its Jewish activity and believe in Muhammad and the [Shi’ite] imams, [that is,] in those continuing the path of Muhammad foreseen [also] by the previous prophets Moses and Jesus, and should it stop being stubborn, then [this group] will be fit for the term ‘children of Israel’ and will be considered ahl al-kitab [People of the Book – who believe in the mission of monotheism conveyed by the prophets, the Torah, the New Testament, and the Quran].

[Tabeb on 5:82] “In Surat Al-Maida [i.e., Koran 5:82], the Quran reveals the order of priorities. I said that these and [also] these are the enemies, but as far as hostility goes, the top-ranked enemy is the Jews, then the unbelievers, and these two hate you so much that the [Christians’] hatred in comparison is regarded as friendship. This is because the essence of the Christians’ hostility can be curbed, and therefore there is no need to act [against them] at this time…But this is not the case with the Jews.”

[Tabatabai on 9:29] “Regarding their characteristics that necessitate fighting them, as mentioned in the beginning of the verse, followed by them giving the jizya to uphold their protection [i.e., from renewal of the jihad war against them!], it informs [us] that the purpose of humiliating them is their submission to an Islamic lifestyle and to a righteous religious government within an Islamic society. They shall not be equal to Muslims nor stand out against with them as an independent identity, free to express anything their souls feel like, nor to publicize the doctrines and activities invented by their lunacies that corrupt human societies. This all relates to them handing over money from their hands out of a contemptible position. So the meaning of the verse (and Allah knows best) is: Fight the People of the Book who do not [truly] believe in Allah  or in the Last Day, with a faith that is acceptable and uncorrupted from being proper, and who do not forbid what is forbidden in Islam namely those [crimes] that, when committed, corrupt human society, and who do not abide by a religion that conforms with the divine creation. Fight them and persist in fighting them until they are humbled among you, and submit to your rule.”

[Tabatabai on 5:82]  “…the Jews, they had their own scholars, no doubt; but they behaved proudly, and their arrogance and stubbornness did not let them be prepared for accepting the truth…Jews, although they had the same alternatives as the Christians, and they could retain their religion with payment of the jizyah [Koranic poll tax, per verse 9:29], yet they continued in their haughtiness, became harder in their bigotry, and turned to double dealing and deception. They broke their covenants, eagerly waited calamities to befall the Muslims and dealt to them the bitterest deal…[T]he enmity of the Jews…toward the divine religion [Islam] and their sustained arrogance and bigotry, have continued exactly in the same manner even after the Prophet… These unchanged characteristics…confirm what the Mighty Book [the Koran] had indicated.”