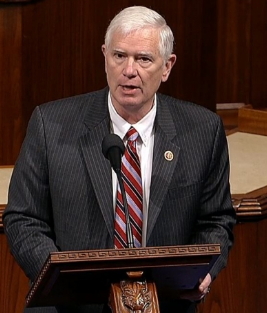 Rep. Mo Brooks (R-AL) stands alone, tragically, amongst all his Congressional colleagues from either party, in speaking with gimlet-eyed candor on the doctrinal jihadist bigotry of mainstream Islam. Shortly after the jihad carnage wrought by jihadist (“call me mujahideen”) Omar Mateen on the Pulse Nightclub in Orlando Florida, June 12, 2016—which targeted homosexuals—Brooks provided the following informed, unbowdlerized observations (during a live interview, and in a follow-up press release):

The root cause of the [jihad] terrorism that we have been seeing over the last 15- or so years has been Islam. There are provisions in the Koran, there are provisions in the hadith [traditions of Muhammad] and sira [earliest pious Muslim biographies of Muhammad]  that if you follow them it instruct Muslims to kill certain types of people [i.e.,wage jihad against them, to impose the Sharia] and homosexuals [Koran; hadith] are right up there at the top. It’s pretty clear that Islamic doctrine says you are to kill homosexuals where you find them…[Y]ou are instructed as a Muslim to kill non-believers…The motivation to kill is found in the Koran and various other learned scriptures in the Islamic religion…in the principles that are taught by Islam.

…More specifically, and with respect to homosexuals, Sheikh Farrokh Sekaleshfar said in 2013 at a speech at the Husseini Islamic Center in Orlando that (quote) ‘Death is the sentence. We know. There’s nothing to be embarrassed about this. Death is the sentence. …. We have to have that compassion for people, with homosexuals, it’s the same. Out of compassion, let’s get rid of them now.’…Consistent with Islam’s anti-homosexual doctrine, in roughly a dozen Muslim nations, it is the official and barbaric government policy to make homosexuality a death penalty offense. Saudi Arabia is the birthplace and home of Islam. Homosexual conduct in Saudi Arabia is a death penalty offense… According to the Washington Post, homosexuality is also a death penalty offense in Yemen, Iran, Mauritania, Nigeria, Qatar, Afghanistan, Somalia, Sudan and the United Arab Emirates, all of which are Muslim governments… Islamic doctrine inspired Muslims to slaughter thousands of Americans in New York, Washington, Chattanooga, San Bernadino, Maryland and northern Virginia, Boston, Fort Hood, Orlando, and many other parts of America. Islam’s danger today is not unique. Islam has a fourteen hundred year history of conquering lands and peoples via genocide and extermination of those who do not accept Islam. Ask the Syrian and Iraqi Yazidis and Christians whether Islam continues this pattern today…I will not apologize for speaking the truth about Islamic doctrine inspiring so many Muslims to slaughter innocent men, women, and children in America, in Syria and Iraq, in Belgium, in Paris and, for that matter, across the globe.

Brooks’ press release issued June 23, 2016 concluded with this fully warranted admonition to institutional Islam, and the global Muslim community, regarding a mea-culpa-based disavowal of the Muslim creed’s mainstream doctrine:

I hope there will be a day when Muslims will, en masse, publicly disavow Islamic doctrine that inspires so many Muslims to slaughter innocent men, women, and children around the world. Unfortunately, that day has yet arrive.

JEFF POOR: It seems like a trend in the Democratic Party — that maybe they don’t want to say it outright on the news, but it seems like there is a trend questioning the alliance the U.S. has with Israel.

Conveyed calmly, and with singularly courageous intellectual honesty, Brook’s straightforward contentions are irrefragable, as can be readily demonstrated.

Islam is rife with Antisemitic motifs in its canonical texts—the Koran, hadith, and sira. The teaching and preaching of these Jew-hating themes has been a continuous process since the advent of Islam, ongoing, till now. Predictably, the inculcation of such “sacralized” Jew-hatred engendered chronic, grinding persecution of Jews living under Islamic rule, interspersed with paroxysms of mass violence, which ultimately caused their near complete ethnic cleansing from Islamdom, save for minute, vestigial remnant populations still subjected [here; here; here], at present, to Muslim discrimination, and depredations. Today, even in the absence of Jews, Muslim nations exhibit an abhorrently disproportionate excess prevalence of extreme Antisemitism, relative to non-Muslim societies, while both mainstream Sunni and Shiite Islam’s most authoritative religious teaching institutions, and religious leaders, openly espouse the creed’s unexpurgated, virulent Antisemitic doctrines. Unique hard data on global Antisemitism collected by the Leftist Anti-Defamation League (ADL) between 2014 and 2017, and the teachings of the two pre-eminent modern [see video] Sunni and Shiite Koranic authorities, respectively—each also an iconic religious leader—confirm this morbid contemporary Islamic reality.

From 2014 through 2017, the ADL performed global and regional surveys which determined the prevalence of those who agreed with six or more of eleven Antisemitic stereotypes, creating an index of extreme Antisemitism. The results demonstrated a remarkably depressing uniformity: Relative to any other major religious affiliation, or atheism/agnosticism, there is a 2 to 4.5-fold excess of Muslim Jew-hatred, and this association with Islam persists within the Muslim diaspora populations in Western Europe, and the U.S.

—The prevalence of extreme Antisemitism in the U.S., 34% of Muslims vs. 14% of the general population, is consistent with all these global trends, i.e., a 2,4-fold excess.

Tabatabai’s modern Koranic Kampf endorses the classical, authoritative Antisemitic Koranic exegeses, as announced at his glosses on Koran 2:40–44—a shared “rebuking” of the Jews which continues for over 100 verses thereafter:

Now begins the rebuking of the Jews that continues for more than a hundred verses. Allah reminds them of the bounties bestowed, of the honors given; contrasting it with their ingratitude and disobedience; showing how at every juncture they paid the favors of Allah with disregard of their covenant, open rebellion against divine commands and even with polytheism. The series reminds them of twelve events of their history — … all of which shows how they were chosen to receive the especial favors of Allah. But their ingratitude runs parallel to it. They repeatedly broke the covenants made with Allah, committed capital sins, heinous crimes and shameful deeds; more despicable was their spiritual poverty and moral bankruptcy — in open defiance to their book and total disregard to reason. It was all because their hearts were hardened, their souls lost and their endeavors worthless.

Tabatabai also offers a traditionalist gloss on Koran 3:112–3:116, which accuse the Jews of “prophet-killing,” “disbelief” in, and “disobedience” to, Allah, invoking His wrath, “hatching conspiracies” against Islam and the Muslim prophet Muhammad, and accordingly, deserving permanent abasement, which was then “stamped” upon them.

Abasement is stamped on them as a design is stamped on a coin, or it encompasses them as a tent encompasses a man. Anyhow, they are either branded with, or overwhelmed by abasement and humiliation — except when they get a protection or guarantee from Allah and a protection or guarantee from men… Abasement is stamped on them; it means that Allah has ordained a law affirming their abasement. This meaning is supported by the proviso ‘‘wherever they are found’’. Obviously, it means that wherever the believers find them and subjugate them; this proviso is obviously more appropriate to legislative abasement, one of whose effects is the payment of the jizya [i.e., the Koranic poll-tax for Jews, per Koran 9:29, whose payment was often accompanied by debasing rituals]. The meaning of the verse therefore is as follows: They are abased and humiliated, according to the law of Islamic Sharia…‘‘those who disbelieve’’ refers to the other groups of the People of the Book which did not respond to the call of the Prophet; those were the people who used to hatch conspiracies against Islam and had left no stone unturned in extinguishing the light of the truth. Obviously, it describes the Jews’ behavior with the Muslims.

Koran 5:64 is an overt, ancient Koranic warning of “Jewish conspiracism.” Tabatabai, adding a deliberate and transparent pejorative reference to the Jews of modern Israel, and their alleged promulgation of “ethnic supremacism,” glosses this verse as follows:

“whenever they kindle a fire for war Allah puts it out”: To kindle a fire is to inflame it, and to put it out is to extinguish it. The meaning is clear. There is another possibility that the clause: “whenever they kindle a fire,” explains the preceding clause: “and We put enmity and hatred . . .” Thus the meaning will be as follows: Whenever they kindled a fire of war against the Prophet and the believers, Allah puts it out by reviving their internal discords and differences. The context points to the divine decree that their endeavors in kindling the fire of war against the divine religion and against the Muslims (because of their belief in Allah and His signs) are bound to fail. However, it does not cover those wars, which the Jews might wage against the Muslims, not for religious motive, but because of politics, or because of ideas of racial or national superiority.

[T]he Jews, although they had the same alternatives as the Christians, and they could retain their religion with payment of the jizyah [Koranic poll tax, per verse 9:29], yet they continued in their haughtiness, became harder in their bigotry, and turned to double dealing and deception. They broke their covenants, eagerly waited calamities to befall the Muslims and dealt to them the bitterest deal…[T]he enmity of the Jews…toward the divine religion [Islam] and their sustained arrogance and bigotry, have continued exactly in the same manner even after the Prophet… These unchanged characteristics…confirm what the Mighty Book [the Koran] had indicated.

The] Koran describes the Jews with their own particular degenerate characteristics, i.e. killing the prophets of Allah [see Koran 2:61/ 3:112 ], corrupting His words by putting them in the wrong places [4:46], consuming the people’s wealth frivolously [4:161], refusal to distance themselves from the evil they do [3:120; 5:79], and other ugly characteristics  caused by their deep-rooted (lascivious) envy [2:109]…only a minority of the Jews keep their word…[A]ll Jews are not the same. The good ones become Muslims [Koran 3:113], the bad ones do not.

During his tenure as Grand Imam of Al-Azhar, Tantawi’s public statements on “dialogue” (January 1998) with Jews, the Jews as “enemies of Allah, descendants of apes and pigs” (April 2002; from Koran 5:60), and the legitimacy of homicide bombing of Jews (April 2002)—a statement issued after the March, 2002 Netanya homicide bombing carnage of Jews at a Passover seder—made his personal Muslim Jew-hatred eminently clear. Tantawi’s comments on dialogue, which were issued shortly after he met with Israel’s Chief Rabbi, Israel Meir Lau, in Cairo, on December 15, 1997, re-affirmed his ongoing commitment to the views expressed in “Jews in The Koran and The Traditions”.

Despite the established validity of Mo Brooks’ concerns, requisite calumnies and derision were sprayed upon him by both Rep. Omar, and her equally repugnant hard Leftist abettors.  Compounding these sins of commission, are those of omission by Rep. Brooks’ GOP colleagues. Consider Jewish Republican Congressman Lee Zeldin, whose grandstanding “critiques” of Congresswoman Omar scrupulously avoid any mention of the clear Islamic doctrinal and (living) historical context Mo Brooks fearlessly enunciated. As anticipated, Congressman Zeldin proffered no independent confirmation, or endorsement of his Alabama colleague’s apt comments.

Mo Brooks Agonistes remains the sole Congressman who has the intellectual bravery and moral rectitude to break the craven self-imposed silence on Islam every other one of his House and Senate colleagues have chosen to exercise. Ha-Shem bless Mo Brooks, but this overall sorry state of Congressional affairs is a lingering, self-destructive shanda שאַנדע‎.