Removing Jew-Hatred From The Mosque: A Vatican II Paradigm For Islam?

Posted on 7th April 2019 | Comments Off on Removing Jew-Hatred From The Mosque: A Vatican II Paradigm For Islam? 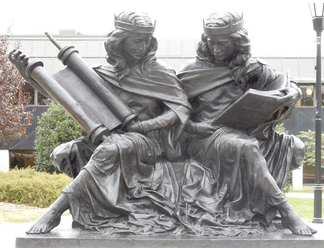 Pope Francis made an unscheduled visit to the campus of St. Joseph’s University in Philadelphia, September 27, 2015, to view the sculpture by artist Joshua Koffman commemorating the 50th anniversary of Nostre-Aetate, the Second Vatican Council Declaration on the Relationship of the Church to Non-Christian Religions, in particular Judaism. Koffman’s bronze work “Synagoga and Ecclesia in Our Time,” depicts a female figure representing the Church sitting next to another female figure representing the Synagogue, each holding their holy scriptures, which they appear to be discussing. It is meant to oppose centuries of art in which the triumphal Christian “Ecclesia” stood wearing a crown, while a woman representing “Synagoga,” stood blindfolded and drooping, cradling a broken lance in one arm (likely an allusion to the lance that pierced Jesus), while tablets of the Torah appeared to be slipping from her opposite hand .

Vatican II/Nostre Aetate, as illustrated by two sentences from a pronouncement issued October 28, 1965, unambiguously condemned Antisemitism, from The Church’s perspective:

Moreover, mindful of her common patrimony with the Jews, and motivated by the gospel’s spiritual love and by no political considerations, she deplores the hatred, persecution, and displays of Antisemitism directed against the Jews at any time, and from any source

Catholic Theologian John T. Pawlikowski, observed in 1996 (from the essay collection, appositely entitled, Removing Anti-Judaism from the Pulpit), that the noble ideals articulated in this pronouncement were only advanced when The Vatican Council,

The “Phase I cleansing” stage in this overall process, as Dr. Pawlikowski characterized it, involved

…the removal from mainline Christian educational texts of the charge that Jews collectively were responsible for the death of Jesus, that the Pharisees were the arch enemies of Jesus and spiritually soulless, that Jews had been displaced by Christians in the covenantal relationship with God as a result of refusal to accept Jesus as the Messiah, that the “Old Testament” was totally inferior to the New and that Jewish faith was rooted in legalism while the Christian religion was based on grace.

..the elements of the patristic anti-Judaic theological system had pretty much been eliminated from the textbooks

Shamefully prevailing till now, the polar opposite “accepted standard” allows for open promulgation of Jew-hatred from Islam’s canonical texts, by its leading teaching institutions, and most authoritative religious leaders. The virulently Jew-hating, replacement theology themes Vatican II/Nostre Aetate explicitly rejected and sought to expunge from Christianity, are triumphantly preached, now, unchallenged, within their own unique mainstream Islamic framework by the leading institutional and clerical pillars of Sunni and Shiite Islam. Two examples suffice to make this irrefragable point.

The late Muhammad Sayyid Tantawi was Grand Imam  of Al Azhar University—effectively the Papal equivalent of Sunni Islam’s Vatican—from 1996, until his March, 2010 death. Tantawi was one of the most revered modern authorities on Koranic exegesis, or “tafsir,” having edited a massive 15-volume modern Koranic commentary, and helped create the largest online website of such analyses. He also authored what can be aptly described as modern Islam’s Koranic Kampf on the Jews, entitled “Banū Isrāʼīl fī al-Qurʼān wa-al-Sunnah,” or “Jews in The Koran and The Traditions”. Tantawi’s magnum opus, a 766 page Muslim academic religious treatise, includes this summary Koranic rationalization for Muslim Jew-hatred:

[The] Koran describes the Jews with their own particular degenerate characteristics, i.e. killing the prophets of Allah [see Koran 2:61/ 3:112 ], corrupting His words by putting them in the wrong places, consuming the people’s wealth frivolously [4:161], refusal to distance themselves from the evil they do [3:120; 5:79], and other ugly characteristics [see a fuller 2004 litany with Koranic citations by Tantawi’s Al-Azhar colleague, and head of the religious edict, or “fatwa” committee, Sheikh Saqr: “Jews’ 20 Bad Traits As Described in the Qur’an”]  caused by their deep-rooted (lascivious) envy [2:109]…only a minority of the Jews keep their word…[A]ll Jews are not the same. The good ones become Muslims [Koran 3:113], the bad ones do not.

As Grand Imam of Al-Azhar, Tantawi’s public statements on “dialogue” (January 1998) with Jews, the Jews as “enemies of Allah, descendants of apes and pigs” (April 2002; from Koran 5:60), and the legitimacy of homicide bombing of Jews (April 2002), made his personal Muslim Jew-hatred eminently clear. Tantawi’s comments on dialogue, which were issued shortly after he met with Israel’s Chief Rabbi, Israel Meir Lau, in Cairo, on December 15, 1997, provided him another opportunity to re-affirm his ongoing commitment to the views expressed about Jews in “Jews in the Koran and the Traditions”, (his published, and multiply re-published treatise):

…anyone who avoids meeting with the enemies in order to counter their dubious claims and stick fingers into their eyes, is a coward.  My stance stems from Allah’s book [the Koran], more than one-third of which deals with the Jews…[I] wrote a dissertation dealing with them [the Jews], all their false claims and their punishment by Allah.  I still believe in everything written in that dissertation. [i.e., Jews in the Koran and the Traditions, cited above]

Muhammad Husayn Tabatabai’s, “The measure of balance/justly held scales in the interpretation of the Quran,” is regarded as the most important 20th century Shiite Koranic commentary. Moreover, the Islamic Studies academy—both Western and Iranian—has designated Tabatabai (d. 1981) the leading modern Shiite religious scholar and philosopher, dubbing him a “theosopher.” Allameh [Allamah] Tabatabaei [Tabatabai] University, named in honor of this celebrated Shiite authority and “theosopher,” is the largest specialized state social sciences university in Iran and the Middle East, with 17,000 students and 500 full-time faculty members. Affirming his continued lofty stature, and relevance, an Iranian national conference was held on May 3, 2012, in Qom, dedicated to “recognizing the interpretative methods and principles used by Allameh [Allamah] Tabatabaee [Tabatabai] in [his Koranic] exegesis.”

[T]he Jews, although they had the same alternatives as the Christians, and they could retain their religion with payment of the jizyah [humiliating Koranic poll tax, per verse 9:29], yet they continued in their haughtiness, became harder in their bigotry, and turned to double dealing and deception. They broke their covenants, eagerly awaited calamities to befall the Muslims and dealt to them the bitterest deal…[T]he enmity of the Jews…toward the divine religion [Islam] and their sustained arrogance and bigotry, have continued exactly in the same manner even after the Prophet… These unchanged characteristics…confirm what the Mighty Book [the Koran] had indicated.

Tabatabai’s authoritative modern Shiite gloss further reiterates—and validates—the notion established by a millennium of Sunni exegeses that Koran 17:4–7 refers to Allah’s brutally just punishment of the “corrupting” Jews (specifically, the destruction of the two ancient, historical Jewish temples by the Babylonians and Romans). His exegesis also recapitulates Shiite traditions claiming the “corrupting” Jews conspiratorial responsibility for the murder of Shiism’s most lauded “martyrs”—the fourth Caliph Ali, and his son Husayn. Perhaps more striking is Tabatabai’s approving affirmation of these (“and other”) traditions, that the two corruptions mentioned in the Koran were the murdering of Ali and Ḥusayn. Tabatabai ultimately invoked Muhammad himself as a final validation for this viewpoint,

…presented to reflect all the things that go on within this nation and what comes forth from it, from the Israelites, truthfully reflecting what the prophet [Muhammad] (may Allah honor him and grant him peace) repeatedly reported, namely that this nation will commit exactly what the Israelites committed [before] in completely the same way.  They would even take possession of a lizard’s hole [in retaliation] for [that lizard] disturbing them.

Both Tantawi’s and Tabatabai’s successors at the respective pinnacles of Sunni and Shiite Islamic religious education, continue to espouse the same canonical Islamic themes of Jew-hatred. These Jew-hating motifs are, in turn, transmitted and reinforced wherever Muslim communities exist. As a direct consequence, global rates of extreme Jew-hatred (i.e., agreeing with ≥ 6/11 of the Jew-hating stereotypes defined by the Anti-Defamation League) in Muslim populations, including immigrant communities in Western Europe, and the United States, consistently exceed by at least 2 to 3-fold the rates of extreme Jew-hatred amongst persons of any other major religious faith, or those professing no religion.

The chasm between authoritative, mainstream contemporary Muslim and Christian teachings with regard to the Jews, couldn’t be wider. Religious leaders, as well as elites in government policy, academia, and the media must begin to discuss this asymmetry candidly, given the global pandemic of Muslim Jew-hatred. Institutional Islam must be admonished by intellectually honest, gimlet eyed Jews and Christians alike to begin its own “Mecca-Qom-Karbala I” process, akin to Vatican II/ Nostre Aetate.