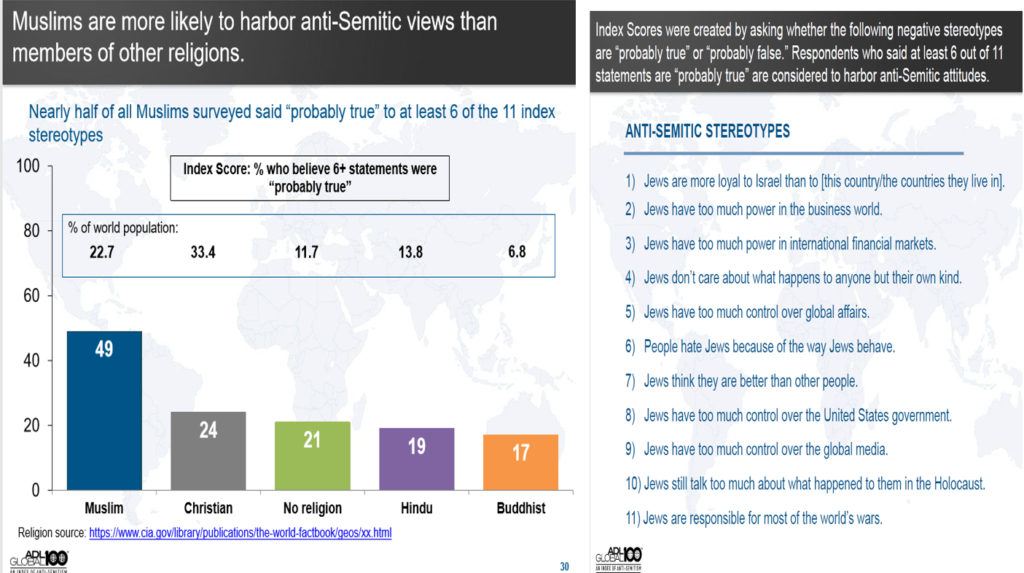 Next Tuesday, April 9th, the House Judiciary Committee is slated to hold a hearing entitled, “Hate Crimes and the Rise of White Nationalism.” One would surmise hate crimes against Jews will be center stage given that for over two decades, Jews have been victimized disproportionately by such offenses, based upon hard FBI data (1996–2017). Moreover, despite much public hand-wringing about “Islamophobia”—notwithstanding 53 jihadist attacks which have caused 158 deaths  in the U.S., since the cataclysmic 9/11/2001 jihad carnage, and zero, remotely comparable depredations by Jews—hate crime rates targeting Jews, between 2015 and 2017, remained 2.2 to 3.1-fold higher, relative to the rates of hate crimes against Muslims. Adding insult to the irony of perseverating on “Islamophobia,” or worse still equating it with Antisemitism, Jews are being subjected to a global pandemic of Muslim Jew-hatred, which includes the attitudes of U.S. Muslims.

Middle East Media Research Institute (MEMRI) director Yigal Carmon, is a fluent Arabic speaker, and translator, whose organization scrupulously monitors and records mosque sermons across the world, including within the U.S. Interviewed for a recent chilling documentary (channel 13, Israel, original Hebrew, here) on American Muslim Jew-hatred, he referred bluntly to the “jihadist conversations of the antisemitic Islam,” taking root, unopposed, in the U.S., and its Islamic textual basis:

A lot of the hatred against the Jews has turned into really violent threats, based on Islamic texts

Carmon further warned that violent acts of Jew-hatred perpetrated by Muslims in the U.S. could reach a Western European scale, “If there isn’t an awakening, and resistance against this.” He also condemned the feckless inaction of a Jewish community unwilling to identify, and combat, the Islamic religious origins of this Jew-hatred, because it is paralyzed by fears of being labeled “Islamophobic.”

The Jewish community, which are direct victims and direct targets of these [Islamic religious] incitements are afraid to do something [i.e., about the religious incitement, specifically]. Not a protest, no public activity, nothing at all. They are afraid to be thought of as Islamophobic.

There is no better example of this broader self-destructive fear of “Islamophobia” Carmon described in the Jewish community, than the perverse House Resolution spawned by Somali Muslim Congresswoman Ilhan Omar’s statements of overt conspiratorial Muslim Jew-hatred. The final draft did not mention her by name, and was compelled to include language decrying “anti-Muslim bigotry.”

Referencing Rep. Omar as a “lightning rod” (per an anodyne Fox News clip spliced into the presentation), the documentary places her Jew-hating remarks, appositely, within the animating U.S. and global Muslim milieu, willfully ignored by our craven political and religious leaders, and major media outlets:

…[T]he roots of this [Jew-hating] conversation are implanted in the communities and leaders of the [American] mosques. After many years of tracing the conversation in mosques [U.S., and globally] it is clear. This [incitement of Jew-hatred] is not an indirect response to what is happening around the world, but an organized effort to revert to the original Islam, that sees the Jews as infidels they [the Muslims] must fight and annihilate. These ideas are not preached to empty rooms.

[The] Koran describes the Jews with their own particular degenerate characteristics, i.e. killing the prophets of Allah [see Koran 2:61/ 3:112 ], corrupting His words by putting them in the wrong places, consuming the people’s wealth frivolously [4:161], refusal to distance themselves from the evil they do [3:120; 5:79], and other ugly characteristics [see a fuller 2004 litany with Koranic citations by Tantawi’s Al-Azhar colleague, and head of the religious edict, or “fatwa” committee, Sheikh Saqr: “Jews’ 20 Bad Traits As Described in the Qur’an”]  caused by their deep-rooted (lascivious) envy [2:109]…only a minority of the Jews keep their word…[A]ll Jews are not the same. The good ones become Muslims [Koran 3:113], the bad ones do not.

As Grand Imam of Al-Azhar, Tantawi’s public statements on “dialogue” (January 1998) with Jews, the Jews as “enemies of Allah, descendants of apes and pigs” (April 2002; from Koran 5:60), and the legitimacy of homicide bombing of Jews (April 2002), made his personal Muslim Jew-hatred eminently clear. Tantawi’s comments on dialogue, which were issued shortly after he met with Israel’s Chief Rabbi, Israel Meir Lau, in Cairo, on December 15, 1997, provided him another opportunity to re-affirm his ongoing commitment to the views expressed about Jews in “Jews in the Koran and the Traditions”, (his published, and multiply re-published treatise):

…anyone who avoids meeting with the enemies in order to counter their dubious claims and stick fingers into their eyes, is a coward.  My stance stems from Allah’s book [the Koran], more than one-third of which deals with the Jews…[I] wrote a dissertation dealing with them [the Jews], all their false claims and their punishment by Allah.  I still believe in everything written in that dissertation. [i.e., Jews in the Koran and the Traditions, cited above]

Ahmed al-Tayeb, who succeeded Tantawi as Grand Imam of Al-Azhar University, was the number 1 ranked Muslim figure for 2017 in “The Muslim 500”. His “The Muslim 500” profile states,

Al-Tayeb, in an interview that aired on Channel 1, Egyptian TV, October 25, 2013, gave a concise explanation of the continuing relevance of the Koranic verse 5:82 which has been invoked—“successfully”—to inspire violent Muslim hatred of Jews since the advent of Islam. It is also important to note that al-Tayeb was explicit in equating Zionism with Judaism, and Zionists with Jews.

A verse in the Koran explains the Muslims’ relations with the Jews…This is an historical perspective, which has not changed to this day. See how we suffer today from global Zionism and Judaism…Since the inception of Islam 1,400 years ago, we have been suffering from Jewish and Zionist interference in Muslim affairs. This is a cause of great distress for the Muslims. The Koran (5:82 )said it and history has proven it: “You shall find the strongest among men in enmity to the believers to be the Jews…”

Within a year—because of his belief in (and promulgation of) Islam’s “sacralized,” conspiratorial Jew-hating canon (see Koran 5:32–33 and 5:64 Muhammad’s poisoning to death by Jews in the “traditions”)—Grand Imam al-Tayeb insisted that the scourge of jihad terrorism, ravaging the Middle East, epitomized by ISIS, is due to the machinations of “Global Zionism,” i.e., Jews. During a televised statement which aired on Channel 1 Egyptian TV, September 8, 2014, al-Tayeb intoned:

All the [fundamentalist terrorist groups] are the new products of imperialism, in the service of global Zionism in its new version, and its plot to destroy the [Middle] East and tear region apart.

Al-Azhar’s authoritative expounding of traditional, institutionalized Islamic Jew-hatred is ultimately manifest in the global pandemic of strongly bigoted Muslim attitudes towards Jews as documented by unprecedented Anti-Defamation League (ADL) surveys conducted in 2014, updated in 2015, and again, during 2016-2017, in the U.S. . “Scaling” conspiratorial Jew-hatred, based upon an index of eleven antisemitic stereotypes, 50% of the world’s Muslims harbored the most intense animus (affirming ≥ 6/11 stereotypes), a rate 2 to 3-fold higher than among any other major faith (i.e., Christianity, Hinduism, and Buddhism), or those professing no religion. Fully 75% of Middle East and North Africa Muslims, overall, expressed this level of Jew-hating intensity, ranging between 92%-93% in Gaza/ Judea-Samaria (“the West Bank”) and Iraq, to 74%-75% in Saudi Arabia and Egypt, respectively. Predictably, when queried, canonical Islamic Jew-hatred emerges as a critical etiologic factor in shaping these Muslim attitudes. Follow-up 2015 ADL data from Western European Muslims (an oversample of the Belgian, French, German, Italian, Spanish, and UK Muslim populations) revealed that 55% shared this level of Jew-hatred. These Western European ADL findings are consistent with prior analyses of the indoctrination of Muslim European youth and adults with textual Islamic Jew-hatred, and European Union data that acts of overt antisemitic violence are at least ~25-fold more likely to be committed by Muslims, relative to non-Muslims. European reports on violent Jew-hatred published in 2015 and 2017 highlighted the ongoing “disproportionate” culpability of Muslims in committing such acts.  The 2015 and 2017 reports were also concordant in identifying the central role of Islam in fomenting European Muslim Jew-hatred, observing [in 2015] “the level of antisemitism rises with the level of [Islamic] religiosity,” and with so-called, “fundamentalist interpretations of Islam,” and [in 2017], “Muslim respondents’ high level of religiosity was therefore a key factor in explaining the high level of antisemitism among Muslims.”

Based on 3,600 interviews conducted by the ADL in the U.S. in January and February 2017, and another 1,500 interviews in October 2016, 34% of American Muslims hold extreme antisemitic views (believe >=6/11 Jew-hating stereotypes), vs. only 14% of the general non-Muslim U.S. population. This relative 2.4-fold increased rate of extreme Jew-hatred amongst U.S. Muslims is very consistent with ADL’s global data on Muslims, although the absolute rates are, thankfully, lower across all American religious groups. The documented promulgation of canonical Islamic Jew-hatred in U.S. mosques (here; here; here), through early 2019, and Muslim primary and secondary schools (here; here), may have already contributed to sporadic violent acts (or attempted acts) by Muslims against American Jews (here; here; here). As Yigal Carmon has just  prognosticated, should this traditionalist, mainstream Islamic Jew-hating incitement continue unchecked, it  will eventually generate levels of Muslim antisemitic violence on par with those now occurring in Europe.

Somali Muslim “apostate” Ayaan Hirsi Ali stands in striking contrast to the unrepentant, defiantly Jew-hating Somali Muslim Congresswoman Ilhan Omar. Ayaan’s genuinely contrite 2006 acceptance speech upon receipt of the American Jewish Committee’s “Moral Courage Award,” was an unabashed mea culpa for her former attitudes of Islamic Jew-hatred. She renounced, candidly, the “holy [Koranic] verses to support hatred of Jews …taught in the name of Islam.”  Vanishingly rare displays of intellectual courage by Yigal Carmon, and Ayaan Hirsi Ali regarding the Islam in Islamic antisemitism, must become the rule. Otherwise, continued denial of Islam’s mainstream, canonical Jew-hatred, and the global Muslim attitudes it fosters, will have increasingly violent, even murderous repercussions for Jews.