“[H]e (Muhammad) had such a repugnance to the form of the cross that he broke everything brought into his house with that figure upon it” [per Waqidi’s biography of Muhammad, via William Muir. The Life of Mahomet, Vol. 3, 1861, p. 61] 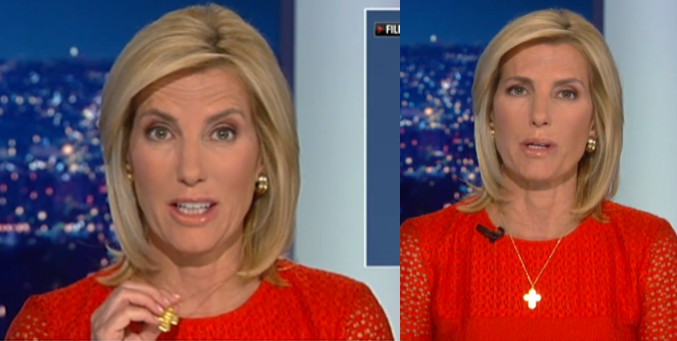 Bostom: “[T]he theology of Islam is fundamentally anti-Christian—beliefs that Christians hold so dear, so foundational, are rejected and criticized and denounced by Islam… Laura Ingraham can sit there—I don’t care if she wears a cross that literally bends her neck over—you will never hear any of this on her show.”

Janet Mefferd interviewed me Friday 6/14/19 for a segment that aired Monday 6/17/19. The interview riveted upon a Monday 6/10/19 discussion between Fox News host of “The Ingraham Angle,” Laura Ingraham, and two so-called “reformist” Muslim women, Qanta Ahmed, and Asra Nomani [key video extracts here] given unchallenged license to: (i) dissimulate about Islam’s uniquely virulent anti-Christian theology; and (ii) ignore hard data on the resultant unparalleled extent of murderous anti-Christian persecution in Muslim societies, and now Church desecrations in Western Europe, past as prologue.

The previous links, and these summary blogs of mine [here; here; here] serve as backgrounder correctives to the egregious omissions Ingraham facilitated by hosting, exclusively, Muslim apologists absent any informed representative of the myriad Christian victim communities preyed upon because of Islam’s normative, “sacralized” anti-Christian dogma, rooted in the Koran, and hadith or “traditions” of Islam’s prophet Muhammad.

Below is an annotated transcript of my interview with Janet Mefferd. Hyperlinks are embedded, attached most importantly, to the Koranic verses cited, and also to the glosses on these specific verses from the seminal Koranic commentary, Tafsir al-Jalalayn to demonstrate how an authoritative (see p. 357) Islamic educational tool has educated Muslims to understand these verses for 500 years, ongoing (see p. 6).

[Janet Mefferd]: “We are back on Janet Mefferd Today. Is the media willing to tell the truth about Islam? Well, it seems to be the perennial question, and it matters significantly when we note the genocide that is occurring against Christians at the hand of Muslims around the world. Now over at Fox News, Laura Ingraham recently got the perspective from a couple of so-called ‘reformist’ Muslim women on the issue of persecution against Christians. But the results were sort of shocking. One of these Muslim women who appeared on the program, Asra Nomani stated that the reason for the recent Sri Lankan terrorist attacks against Christians was a warped Saudi interpretation of Islam that misrepresents the Koranic directive to stay on the straight path. The other guest, ‘reformist’ Muslim Qanta Ahmed, affirmed that notion. And you gotta hear what she said. I am gonna play a cut, this is cut 1: ‘that kind of interpretation [i.e., ‘Wahhabist’], which is completely anathema…I’m a Muslim who as a child was educated in a Christian school. My parents are in their 80s and they had a Christian education. So that’s completely anathema to the teachings of Islam. It is also asking the Muslims to take actions into their own hands and then persecute for somebody’s beliefs, when Islam says everyone has a right to free will, a right to reject Islam, to reject the truth of God, in any way. So these Muslims are acting beyond the bounds.’”

[Janet Mefferd]: “OK. Is that really true? We’re gonna get some thoughts on it now from Islamic expert and author Dr. Andrew Bostom who has written about this over at his website (here), and says this is religious deception [takiya] in action. Dr. Bostom, what is your take on this claim that those women are making on this [The Ingraham Angle] show?”

[Andrew Bostom]: “This is grotesquely inaccurate. And Qanta Ahmed, who is I think the more egregious of the two, went on to say that this persecution, which has been endemic to societies conquered by Islam, since the advent of Islam, particularly Christian societies, is somehow, quote [i.e., quoting Qanta Ahmed, here], ‘anathema to Islam, that reveres Jesus, that sees The Gospel as a holy book of God.’ I mean this is…We have to go back, we must, we’re being forced to, I certainly have been forced to for the last 17-years, to go back and see what the Koran itself actually says, and what its classical to modern  mainstream interpretations have said for over 13 centuries now.

So for example, what Asra Nomani—who typically is a little better on these subjects—said—she was referring to a specific verse that Muslims repeat 17-times a day. And it’s very clear that the verse, which comes from the opening of the Koran called the Fatiha, it’s the 7th of this very short opening chapter, it’s the 7th verse (i.e, distinct from the 6th verse, Islam’s ‘straight path/way’).  It talks about those who’ve incurred Allah’s wrath, and those are the Jews, and those who’ve gone astray, and those are the Christians. This is a very, very mainstream, repetitively reinforced gloss [on] or interpretation [of] this verse which comes initially from a hadith of Muhammad—so words that Muhammad [stated]—so Muhammad is the one who originally identifies the two groups as being the Jews and the Christians.  But beyond that, all the greatest Koranic commentators—I did a review recently where 90% of the major [Koranic] commentaries from the 8th century through the present, agree with that interpretation, and reinforce it. So this is absolute nonsense to say it’s the Saudis, the Turks, the Qataris [from Qatar]—that’s nonsense. But the theology of Islam is fundamentally anti-Christian—and this is coming from a Jew who just has happened to study it—the idea that beliefs that Christians hold so dear, so foundational, are rejected and criticized and denounced by Islam. So the so-called Muslim Jesus or Isa didn’t die on the cross. And the reason that Muslims cite this is that first of all, basically, Christians and Jews, have corrupted their scriptures. That’s the Koran, the third sura [chapter] the 78th verse [3:78; gloss here]. I am going to give you shorthand on [the formatting of , chapter#: verse#] these verses—people can look them up—[for eg. here]. The [Koranic] claims in three successive verses that Isa didn’t die on the cross, the Jews killed him, or claimed they killed him—in reality he wasn’t killed or crucified—that’s Koran 4:157 [gloss here]. He [Isa] was ascended to Allah—that’s Koran 4:158 [gloss here]—still alive. And on the Resurrection Day, [Koran] 4:159 [gloss here], Isa himself will be a witness against Jews and Christians. That is such…again…it undermines basic Christian belief, and it [the Koranic indictment of Christianity] goes on. There are other core Christian beliefs [i.e., that are attacked in the Koran]. Isa isn’t the son—and in fact belief in a father God, a mother Mary, Isa the son—is a terrible heresy, according to Koran, which Isa himself allegedly rejected, that’s the 5th sura, the 116th verse [5:116; here]. The doctrine of the Trinity is not only a terrible disbelief, those who believe it are awaiting a painful doom—that’s also in the 5th sura, the 73rd verse [5:73; gloss here]. Christians should basically accept Islam—and all true Christians will—because, after all, Abraham was neither a Jew nor a Christian; he was a Muslim. That’s in the 3rd sura, the 67th verse [3:67; gloss here]. It is Muhammad who freed Christians and Jews from this kind of ignorance—that’s in the 98th sura, the 1st to 4th verses [98:1–4; glosses here; here, here; here]. Christians should accept Muhammad as Allah’s messenger, and the Koran as the final revelation. That’s in the 5th sura, the 15th verse [5:15; gloss here]; he 57th sura, the 28th verse [57:28; gloss here]; the 4th sura, the 47th verse [4:47; gloss here]. A few Christians came to believe in Islam, and those are the only real Christians—that’s in the 3rd sura, the 113th to 114th verses [3:113; gloss here] [3:114; gloss here], and they submitted to Allah by accepting Muhammad—that’s in the 3rd sura, the 198th to 199th verse [3:198; gloss here] 3:199; gloss here].  And of course, condemnation to hell for those who don’t believe in these ideas—that are anathema to Christianity, not anathema to Islam—that’s in the 98th sura, the 6th verse [98:6; gloss here]. And therefore the Muslims are compelled to wage eternal jihad against Christians and Jews—those that actually believe in Christianity and Judaism—and compel them to live under Islamic law. That’s in the 9th sura, the 29th verse [9:29; gloss here]. And even when they’re submitted, living under the Sharia, Muslims are advised not to take Christians—legitimate Christians and Jews, who actually believe in their own religions—they’re advised not to take them as friends [Koran 5:51; gloss here].  And then of course, you get to the end of times—and Isa comes back. He was taken out of his abode—whatever, in the Koran—he comes back in the hadith [Sunan Abu Dawud Book 37, Hadith 4310; 4324] as a pious Muslim destroyer of Christianity. As it says in this canonical hadith, he will ‘break the cross, kill swine, and abolish the jizya.’ [Koranic poll-tax, per 9:29, historically, obtained accompanied by ritual humiliation of Christians and Jews]. In other words there will be no more Ch because Christianity, because ‘Allah will perish all religions, except Islam,’ its says in this canonical hadith. And Jesus, Isa, will be the instrument of this, destroying what’s the Islamic equivalent of the anti-Christ, which is often identified as a Jew, by the way, but, regardless, is always accompanied by Jewish minions.”

[Bostom]: “I’ve just given you a quick walk through”

[Bostom]: “And you will never hear this on Fox News. Laura Ingraham can sit there—I don’t care if she wears a cross that literally bends her neck over—you will never hear any of this on her show, and this is just an outrage when you combine that with the physical evidence that we have. If you look at Open Doors surveys [for eg., 2019, here], every year, 90%, 95%, of the worst persecuting countries for Christians are Islamic countries, and she had the temerity, Qanta Ahmed, to talk about Qatar? [note: ranked 38th in the top 50 worst Christian persecutors in the 2019 Open Doors survey with a “very high” level of persecution]. Yes, Qatar built a Catholic Church back in 2008. Fox even reported about it.  It’s a bare structure, that has no cross, has no bells, cannot ring bells—it is basically inside an enclosure. It is a dhimmi [Islamic term for subjugated Christians and Jews allowed limited practice of their faith, and subject to deliberately inferior legal and humiliating social status, as pariahs, under the Sharia] church the way Sharia mandates that Christians practice…”

[Mefferd]: “Why the takiya [Islam’s sanctioned dissimulation, per, for eg., Koran 3:28; gloss here], though? Why do you think they [Qanta Ahmed and Asra Nomani] get on, and don’t just cop to it, when it’s so anecdotally refutable, not just theologically refutable, like you just did, but also when you look across the world, and you say, ‘really, if it’s just a Wahhabist outlier perspective, then why do you see Christians being killed in genocidal levels, around the world.’ ”

[Bostom]: “Because we’re supposed to believe that these people [Ahmed; Nomani] that they [Fox News; Ingraham] have on the show [The Ingraham Angle]—who may have certain motives that we would both respect—I think they [Ahmed; Nomani] don’t tell the truth out of embarrassment. But it begs the question. You raised a core issue. We have to be truthful about these things. And I think it is an obscenity now that this paradigm [i..e., for Fox News’ ‘discussions’ of Islam] is that you have [Muslim] apologists like this on. And again I’m not saying they’re bad people, necessarily. I think they’re genuinely embarrassed by the truth. . Regardless, that’s not very helpful to put it mildly. But the fact is that they [The Ingraham Angle] led into the segment with a report by Raymond Ibrahim—who’s a Copt [Egyptian Eastern Christian] who’s fluent in Arabic, who’s an excellent historian, and very sober commentator— it was his data that Laura [Ingraham] led into the segment [with]—so why not have Raymond on there…”

[Bostom]: (continuing)…“to actually tell the truth about what’s going on?”