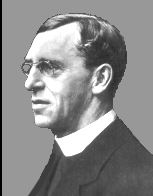 W.H.T. Gairdner [1873-1928] was an Anglican theologian who spent three decades in Cairo, Egypt, acquiring renown as a very accomplished Arabic linguist, and teacher. His scholarship included the publication of a seminal translation of Al-Ghazali’s “Mishkat Al-Anwar” [“The Niche For Lights”]. A serious student of Islam, while respectful of the creed, Gairdner paid considerable attention to its expansion, and wrote unapologetically about the challenges that posed to Christianity.  Here are Gairdner’s unabashed observations on the virulently Anti-Christian core theology of traditional, mainstream Islam:

“Other religions know nothing of Christianity; one and all they came before it and speak of it neither good nor evil. But the whole theory of Islam is that it, the latest-sent of all religions, does not so much abrogate Christianity with its Book [Bible], as specifically and categorically deny both as willful corruption and lies. Point by point, each truth of Christianity, steeped through and through with the tenderness of the love of God, is negated with abhorrence by Islam; the Fatherhood of God; the Sonship and Incarnation of Jesus Christ; the Divinity of the Holy Ghost; the death of Christ and all that it means, whether ethically of love, infinite tenderness, infinite self-sacrifice; or spiritually of sin condemned, and sin forgiven; the Resurrection of Christ on the third day; His glorification with the Father with the glory which He had with Him before the world was each several truth of these truths is a blasphemy in the eyes of every Moslem, a lie which Islam came expressly to blast, taught by a Book which the Koran came expressly to replace.”