Posted on 27th March 2019 | Comments Off on “Mas-Kom-Yah” Erdogan, Mainstream Islam’s Most Influential Muslim of 2019 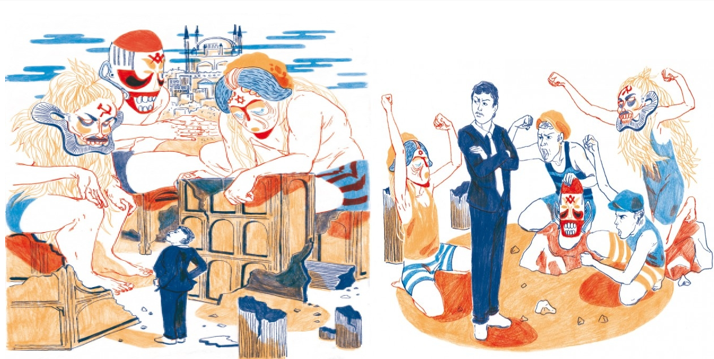 Turkish President Erdogan, while campaigning for re-election, has repeatedly displayed ghoulish video of the recent New Zealand mosque massacres. Opining on the New Zealand mosque carnage at a related commemoration of the (World War I-era) Battle of Gallipoli, Erdogan reflexively ignored the global context of jihad depredations against non-Muslims, and internecine Muslim violence (including Turkey’s own hand in these phenomena; here; here; here). The Turkish  President’s Gallipoli address threatened those allegedly “forming dark alliances” against Muslims, Muslim Turkey, in particular, with the same fate that befell “your grandfathers,” “enemies,” buried in Gallipoli’s “soils and waters.”:

…104 years after Gallipoli, we call out one more time: We have received your message, and we understand your feelings and your intentions. We understand that your enmity and your hatred are alive. We understand what it means that one terrorist appeared and killed 50 Muslims…. If you come with the same intentions, we will wait for you, as well. Have no doubt that we will send you away just like your grandfathers

Entirely consistent with the conspiratorial Jew-hatred of the worldwide Muslim umma he represents, and embodies, Erdogan further linked the mass murderous actions of Brenton Tarrant to Israel/Jews:

Notice that the expressions of the son of the person at the head of Israel are the same as those of the terrorists in New Zealand. They are being fed by the same source, no matter where they are in the world

–“to protect, preserve and propagate traditional, orthodox, ‘moderate’ Islam as defined by the international Islamic Consensus on the ‘Three Points of the Amman Message’ arrived at over the years 2005-2006.”

–“to spread knowledge of the ‘Amman Message’ of November 2004 and the principles it contains in so far as these best represent traditional, orthodox, ‘moderate’ Islam.”

–“to establish, propagate and publicize the religious and legal positions of traditional, orthodox, ‘moderate’ Islam on key issues relevant to life in the modern world.”

Acknowledging his stature in Islamdom, and apropos to the RISSC’s own stated commitment to “traditional, orthodox, ‘moderate’ Islam,” Erdogan is ranked #1—the most influential Muslim—in the 2019 The Muslim 500.

Erdogan was the Prime Minister of Turkey, for 11 years, winning three consecutive elections with a majority (2002, 2007 and 2011), before becoming Turkey’s first popularly-elected president in August 2014, and then securing a second term in the 2018 election.

Erdogan secured 52.5% of the vote in the 2018 Presidential election (electoral turnout was 86%), and thereby avoided a second round runoff. This was a continuation of his remarkable popularity and success at the ballot box over the past two decades…During his terms, Turkey has seen unprecedented economic growth, constitutional reform, and re-emergence as a global Muslim power.

The 2019 RISSC iteration of “The Muslim 500” categorizes 99% of the world’s Muslims as either “traditional” (90%) or “fundamentalist” (9%), who, despite the latter’s more “politicized” views, share a common vision of Sharia-based Islam. As in all previous iterations of “The Muslim 500,” there is a trenchant  description of the remaining ≤ 1% of the global Muslim umma, so-called “modernist” Muslims. Dismissing the modernists’ “scant knowledge of traditional Islam,” “The Muslim 500” once again explodes a comforting canard about “reform,” and “reformists,” continuously promoted by willfully uninformed, or self-delusive Western apologists for Islam, across the political spectrum.

Islamic modernism is a reform movement started by politically-minded urbanites with scant knowledge of traditional Islam. These people had witnessed and studied Western technology and socio-political ideas, and realized that the Islamic world was being left behind technologically by the West and had become too weak to stand up to it. They blamed this weakness on what they saw as ‘traditional Islam,’ which they thought held them back and was not ‘progressive’ enough. They thus called for a complete overhaul of Islam, including—or rather in particular—Islamic law (Sharia) and doctrine (aqida). Islamic modernism remains popularly an object of derision and ridicule, and is scorned by traditional Muslims and fundamentalists alike.

Erdogan’s personal vision of Islam, “Islam can only be one thing,” comports squarely with RISSC’s—and 99% of the world’s Muslims—in rejecting Sharia-antithetical modernism. Sadly, the full scope of Erdogan’s widely shared, predominant Islamic vision—rife with jihadism, and conspiratorial Jew-hatred—dates back more than 4-decades to a “seminal” 1970s play the current Turkish leader, wrote, directed, and “starred” in.  Entitled, “Mas-Kom-Yah,” Masons-Communists-Yahudi (Jews),” it was a Jew-hating diatribe derived from a 4-act 1969 play written by Mustafa Bayburtlu, “Kizil Pençe” (“The Red Claw”), dedicated to the “Mujahideen of Islam who gave their lives in their fight against Communism and Zionism.” French journalist Pierre Boisson’s 2014 investigative report on the atmospherics of the Mas-Kom-Yah, includes this summary description:

The synopsis is crystal clear. The son of a religious Muslim family, played by Erdogan, returns to Turkey after being sent to Europe. He declares that he no longer believes in Allah and considers his parents as retarded. The father also sees his factory taken over and occupied by the Communists, whose leader is Jewish/Zionist. The latter then turns against the workers and reduces them to slavery, giving way to the poem that concludes the play: “The red bastard.” There is talk of permanent drinking, decadence, and women turned into sex objects (led by the ‘Zionist Jew’).

The ugly Islamic Jew-hating “ethos” of Erdogan’s Mas-Kom-Yah has been a “green thread” knitting together his entire subsequent career as a local and national Turkish Muslim politician. Erdogan’s religiously-inspired Jew-hatred was noted, for example, by Gabby Levy, an Israeli ambassador to Turkey, as recorded in a WikiLeaks cable from October, 2009, sent by the US embassy in Ankara, Turkey. Levy’s views were validated by US ambassador James Jeffrey in “C O N F I D E N T I A L ANKARA 001549. SUBJECT: ISRAELI AMBASSADOR TRACES HIS PROBLEMS TO ERDOGAN. REF: ANKARA 1532. Classified By: AMB James F. Jeffrey.” Here are relevant extracts from Ambassador’s Jeffrey’s 2009 cable:

Levy dismissed political calculation as a motivator for Erdogan’s hostility, arguing the prime minister’s party had not gained a single point in the polls from his bashing of Israel. Instead, Levy attributed Erdogan’s harshness to deep-seated emotion: “He’s a fundamentalist. He hates us religiously and his hatred is spreading.” [US ambassador Jeffrey’s observations] Our discussions with contacts both inside and outside of the Turkish government on Turkey’s deteriorating relations with Israel tend to confirm Levy’s thesis that Erdogan simply hates Israel. xxxxx discusses contributing reasons for Erdogan’s tilt on Iran/Middle East issues, but antipathy towards Israel is a factor.

Indeed, the Islamic revival movement of Erdogan’s mentor former Turkish prime minister Necmettin Erbakan (1926–2011), founder of the funda­mentalist Islamic Milli Gorus (National Vision; originated 1969) movement,, which spawned the current ruling AKP party, has always employed a virulently Jew-hating discourse, hinging on canonical themes from Islam. Central to this hatred are frequent quotations from the Koran and hadith [traditions of Islam’s prophet Muhammad and the early Muslim community], nurtured by early Islam’s basic animus towards Judaism. For example, Milli Gazete, mouthpiece of the traditionalist Islamic revival, published articles in February and April of 2005, which were toxic amalgams of ahistorical drivel and virulently Jew-hating and anti-non-Muslim “dhimmi’ (per Koran 9:29) Koranic motifs, including these prototypical comments based upon Koran 2:61/3:112 which stamps eternal humiliation on the Jews for numerous transgressions, including “prophet killing”:

In fact no amount of pages or lines would be sufficient to explain the Koranic chapters and our Lord Prophet’s [Muhammad’s] words that tell us of the betrayals of the Jews. … The prophets sent to them, such as Zachariah and Isaiah, were murdered by the Jews…

The most rabid and savage enemies of Islam on Earth are the Jews. Who says this? Allah says this [Koran 5:82]…The Jews and the Christians will never accept you unless you submit to their religion [Koran 2:120]. These Jews spoil all the agreements on Earth [2:100–101; 5:13] and have murdered [Koran 2:61/3:112]  17 of their own prophets … And I declare here: All Jews who have taken up arms to murder Muslims must be killed, and Israel must be wiped off the map! And it will be wiped out with Allah’s help!”

Finally, consistent with canonical Islam, Erdogan’s Islamic Jew-hatred is linked inextricably to his aggressive jihadism. As Turkish journalist Uzay Bulut observed (and translated), the Turkish President “sounded more like an Ottoman sultan than the leader of a NATO nation,” at a public May 30, 2015 celebration of the 562nd anniversary of the Ottoman jihad conquest of Constantinople. Erdogan extolled “hoisting the flag of Islam in Jerusalem again,” and “stamping the seal of Islam on Al-Aqsa Mosque.” Posing the rhetorical question, “What is conquest?,” Erdogan elucidated the mainstream, traditional Islamic interpretation of jihad to the estimated two million strong cheering throng of Muslims in attendance:

The conquest is Hijrah [expansion of Islam through emigration, following the example of Muhammad, the founder of Islam, and his followers from Mecca to Medina]. The conquest is Mecca. It is to cleanse the Kaaba, the house of Allah on earth, of all the icons. The conquest is Jerusalem. It is when the prophet Omar stamped the seal of Islam on Al-Aqsa Mosque, our first Qibla [the direction to face when a Muslim prays during the five times daily prayers] while respecting all faiths including [those of] Christians and Jews. The conquest is Al-Andalus [Muslim Spain]…The conquest is to open the doors of Anatolia up to Vienna for this blessed nation. The conquest is Osman Ghazi [the first Ottoman Sultan]. It is to make the sycamore [the Ottoman Empire] meet with the ground that would cover three continents and seven climates…The conquest is preparation.”

Center to right policy and opinion makers need to marinate their minds in the unsettling, mainstream Islamic reality that “#1 ranked most influential Muslim” President “Mas-Kom-Yah” Erdogan actually represents, and the clear implications of that appropriate designation. Failed U.S. domestic and foreign policies engendered by chimerical notions of “radical Islam,” or “Islamism,” and their corollaries, “radical Muslims,” or “Islamists,” must be abandoned if the U.S., and all non-Muslim societies, are to deal rationally with mainstream Islam, and mainstream Muslims—like “Mas-Kom-Yah” Erdogan.