Forty-two years ago today, July 20, 1974, the “secular” Turkish army, consistent with its Sharia-supremacist Ottoman ancestors, and their predatory 16th century jihad conquest of Cyprus [see Hill’s understated description of the 1571 capture of Famagusta: “The reader may be spared the description of the horrors which were such as usually occurred at the capture of any Christian city by the Turks,” but he does annotate a chronicler’s “dilations” on them,  about “how his mother’s head was cut off; but what shocked him most, apparently, was that the Turks killed all the swine they found, and their carcasses were mingled with the human corpses” of their Christian victims; Sir George Hill, A History of Cyprus, 1948, Volume 3, p. 984], launched a jihad re-conquest of the island’s northern sections. By mid-August the invading modern Turkish army jihadists occupied 38% of the island, affecting a de facto partition of Cyprus, and engaging in overt re-Islamization efforts thoroughly inconsistent with the delusive, counterfactual trope that Turkey’s military was (and remains), somehow, an agent of “secularization.”

One of the army’s first gestures was to convert the Church of Panagia Glykiotissa (Church of the Virgin Mary, Healer of Pain) in Kyrenia into a mosque so that the troops who had landed at a nearby beach during the invasion could pray (see washed out images, below, from a celebratory account in the Turkish newspaper, Günaydin, published October 12, 1974). There were two mosques in Kyrenia where these troops could have prayed. But this church was apparently converted into a mosque at that time for the following reasons: First, from the Turkish [my note: i.e., Islamic] point of view, the conversions symbolized the victory of the Turkish armed forces over the “unbelievers”—the Christian Greeks. Second, it signified the beginning of the Islamization process which subsequently took place throughout the newly occupied territory as church after church was converted into a mosque.

Ioannides further cites the clear Islamic religious rationale provided for these actions by a “prominent Islamic (religious) figure in Istanbul, Mufti A. Seref,” whose statement “was published in the Turkish press next to a picture of officers and soldiers praying in the Church of Panagia Glykiotissa after it had been converted into a mosque” (in the same October 12, 1974 Günaydin article).  The good Mufti Seref proudly declared:

According to our religion (Islam), if needed, prayers can be held in a church but only under this condition: It is imperative that in the church there should be no religious objects of the infidels (Christians) or these objects should be covered. There should be nothing overhead that has any relationship with these objects. Then prayer can take place. 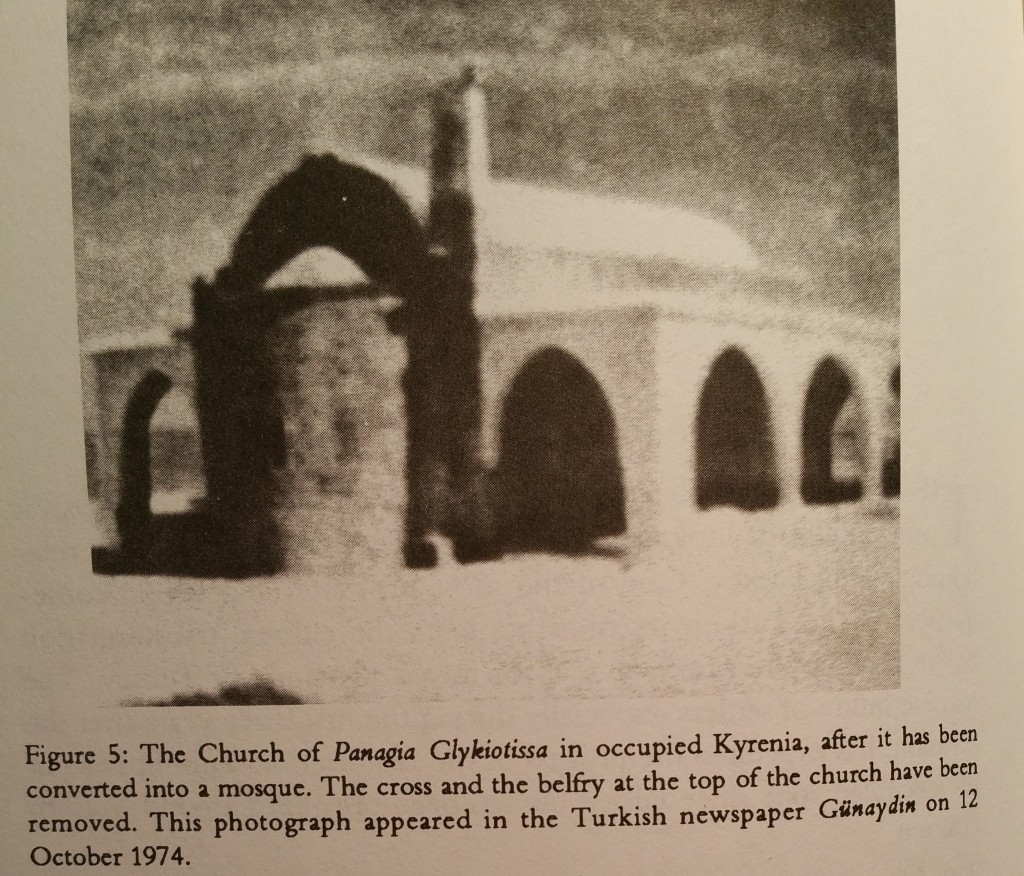 The broader context and extent of this Islamization process can be gleaned from the illustrated scholarly 2008 analysis of Chotsakoglu “Religious monuments in Turkish-occupied Cyprus : evidence and acts of continuous destruction,” (whose text can be viewed via google cache, here):

…the Christian churches remained in northern Cyprus as the only indisputable witness after 1974, proving the  Greek identity, history and presence  of the island. Where these churches were not destroyed, demolished or  sold, they were transformed primarily into mosques or were transformed by the Turkish armed forces into military camps and storage places. The Christian churches were mostly converted into Ottoman mosques. This practice is common and began in the times of the Ottoman Empire and the later Turkish state which was subsequently exercised in Cyprus. It remains a historical fact that between the Ottoman domination (1571) of Cyprus and the British Rule (1878) the newly erected mosques by the Ottomans could hardly reach a number more than ten. All mosques of Cyprus’ main cities (e.g. Keryneia, Lefkosia, Famagusta,  Pafos, Larnaka,  Lemesos) were initially built as Christian churches during the Byzantine period and afterwards were transformed by the Ottomans into mosques….In cases where paintings decorated the church-walls, these were covered by non-pictorial presentations or inscriptions from the Koran, as several cases, which came to light after restoration of the Department of Antiquities, indicate (e.g. mosques of Kato Polemidia, Episkopi, Timi, Pelathousa, Polis Chrysochous).

The same practice was also followed after the 1974 invasion of the northern part of the island. Almost all central churches in towns and villages of occupied Cyprus were transformed into mosques. In several cases the iconostasis of the churches were covered with sheets, while the holy icons, relics and every movable church-object disappeared. At the southern  part  of  the  churches  was  built  a  mihrab (semicircular niche in the wall of a mosque that indicates the qibla, o Direction of prayer towards Mecca),  while externally  was built  a minaret  or if  this was not the case, loudspeakers were placed at the existed belfries and water springs were built in the middle of the church-yard for the needs of the mosques. About 77 cases of registered churches where transformed into mosques.  The example of the gothic cathedral of Famagusta is typical of the Ottoman behavior converting Christian churches into mosques. Right page: Detail from the central entrance of the church of St. John the Theologian in the village Mia Milia, which is today used as the main mosque for the area. The church of St. Demetrius in Leonarisso was used as a mosque before it was abandoned…(examples) from the interior of St. Andrew in the occupied part of Lefkosia, which was converted into a mosque…Turkish flags covered the iconostasis at the Holy Virgin church in Egkomi. The gold-plated ambo, the bishop’s throne and parts of the epistyle of the St. Paraskeve Church in Morfou, were adjusted for its conversion into a Muslim mosque

This past Sunday (posted at WorldNet Daily, Sunday July 17, 2016), I deconstructed the sheer uninformed nonsense endlessly spewed forth about the so-called “secular, democratic Turkish military” in the wake of Turkey’s failed military coup at the end of last week. The events of July-August 1974, and its ugly aftermath, should have resulted in jihadist Turkey’s expulsion from NATO. Instead this predatory state—a proven tool of forceful Islamization, and ethnic cleansing via jihad—still remains within NATO as a fictional “bulwark” against “anti-democratic forces.” 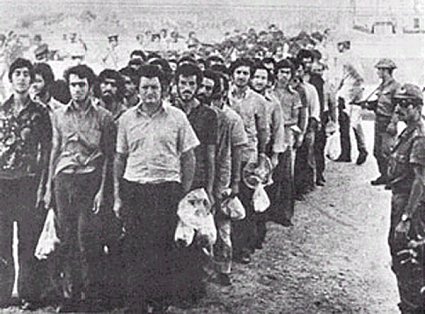 by the invading Turkish military, circa 1974

Using Cyprus’ own short-lived July, 1974 military putsch (the Greek junta-supported coup had collapsed by August 14, 1974) as a pretext for long sought expansionist designs within Cyprus, pseudo-secular Turkey claimed its 1974 jihad invasion was a “peaceful action,” which sought to “restore” Cypriot rights, territorial integrity, and security, “without any discrimination toward the (Christian majority and Muslim minority) Communities.”  But the July-August, 1974 jihad of Turkey’s pseudo-secular military regime, consistent with the devastating half millennial legacy of its Ottoman forbears’ campaigns, was punctuated by Islamic jihadism’s trademark “sacralized” brutality against non-Muslims: massacre, pillage, enslavement, rape, deportation (of infidels), and colonization (by Muslim replacements).

The Sunday Times [of London] managed to secure a copy of the then secret European Commission of Human Rights (ECHR) report, (APPLICATIONS Nos. 6780/74 AND 6950/75, entitled, “CYPRUS AGAINST TURKEY REPORT OF THE COMMISSION,” Adopted on 10 July 1976), and published this harrowing overview (“What Secret Report Tells About Turk Atrocities,” The Sunday Times), on January 23, 1977:

It amounts to a massive indictment of the Ankara government for the murder, rape, and looting by its army in Cyprus during and after the Turkish invasion of summer, 1974…[including] systematic killings of civilians who were not involved in the 1974 fighting; repeated raping of women aged from 12 to 71, often brutally in public; the torture and savage and humiliating treatment of hundreds of Greek Cypriots, including children during their detention by the Turkish army; and charges of extensive looting and plunder which were supported by unpublished United Nations documents.

In the course of the said military operations and occupation, Turkish armed forces have, by way of systematic conduct and adopted practice, caused deprivation of life, including indiscriminate killing of civilians, have subjected persons of both sexes and all ages to torture, inhuman and degrading treatment and punishment, including commission of rapes and detention under inhuman conditions, have arrested and are detaining in Cyprus and Turkey hundreds of persons arbitrarily and with no lawful authority, are subjecting the said persons to forced labor under conditions amounting to slavery or servitude, have caused through the aforesaid detention, as well as by displacement of thousands of persons from their places of residence and refusal to all of them to return thereto, separations of families and other interferences with private life, have caused destruction of property and obstruction of free enjoyment of property, and all the above acts have been directed against Greek Cypriots only, due, inter alia, to their national origin, race and religion.

These specific “atrocities and crimes” perpetrated by the occupying Turkish army between September 19, 1974, and July 10, 1976, when the report was filed, were described, verbatim:

Observing that these atrocities, as enumerated above, “were all committed at a time when no military operations or any fighting whatsoever was taking place,” the report concluded, appositely,

The aforementioned atrocities and criminal acts were directed against Greek Cypriots because of their ethnic origin, race and religion. The object was to destroy and eradicate the Greek population of the Turkish occupied areas so as to move therein Turks, thus creating by artificial means a Turkish populated area in furtherance of Turkey’s policy for the formation of the so called “Turkish Cypriot Federated State.” In pursuance of this policy the members of the Turkish army who took part in the invasion (about 40,000) and their families have been recently declared as subjects of the illegally and unilaterally proclaimed “Turkish Cypriot Federated State”, i.e. the Turkish occupied areas of Cyprus, with the official blessing of Turkey and have occupied the properties, belonging to the Greek Cypriots.

Independent validation of this cultural jihad waged by Turkey’s Muslim invaders was published in a report by the United States Law Library of Congress entitled, “Cyprus: Destruction of cultural property in the northern part of Cyprus and violations of international law”, over three decades later, (April 2009) which confirmed the following:

Almost 50 years ago now, the nonpareil scholar of Ottoman and Republican Turkey, Uriel Heyd delivered a remarkably prescient March,1968 lecture (shortly before his untimely death, May 13, 1968), redolent with wisdom, and another quality almost entirely absent from our present era’s infinitely less informed “experts” on Turkey, and Islam: self-critical humility, and the ability to express mea culpa. Taking his own measure, Heyd confessed—in 1968 !:

When Ataturk died in 1938, many people believed that he had not only succeeded in transforming Turkey into a modern secular state but that Islam was doomed as a vital force in Turkish social and cultural life. It soon, however, became manifest that this judgment was premature, if not altogether wrong…Until a few years ago many foreign observers, including, I admit, myself, were inclined to think that this development [Turkey’s re-Islamization] was no more than a renewed expression of sentiments which for a long time could not be freely manifested and that the overall process of secularization was going on very slowly but irresistibly. Today I doubt whether this view is still tenable.

Nearly a half century later, today’s far less astute “experts” on Turkey and Turkish Islam, etc., nonetheless, not only offer no apologies for their distressingly belated recognition of Turkey’s re-Islamization (if they recognize it at all), most remain in complete denial of its repeated manifestations, including the brutal 1974 jihad invasion and annexation of Northern Cyprus, launched July 20, 1974.