Background Discussion Of The Cover Design By Bosch Fawstin For My Forthcoming Book, “Koranic Jew-Hatred”

Posted on 8th August 2016 | Comments Off on Background Discussion Of The Cover Design By Bosch Fawstin For My Forthcoming Book, “Koranic Jew-Hatred” 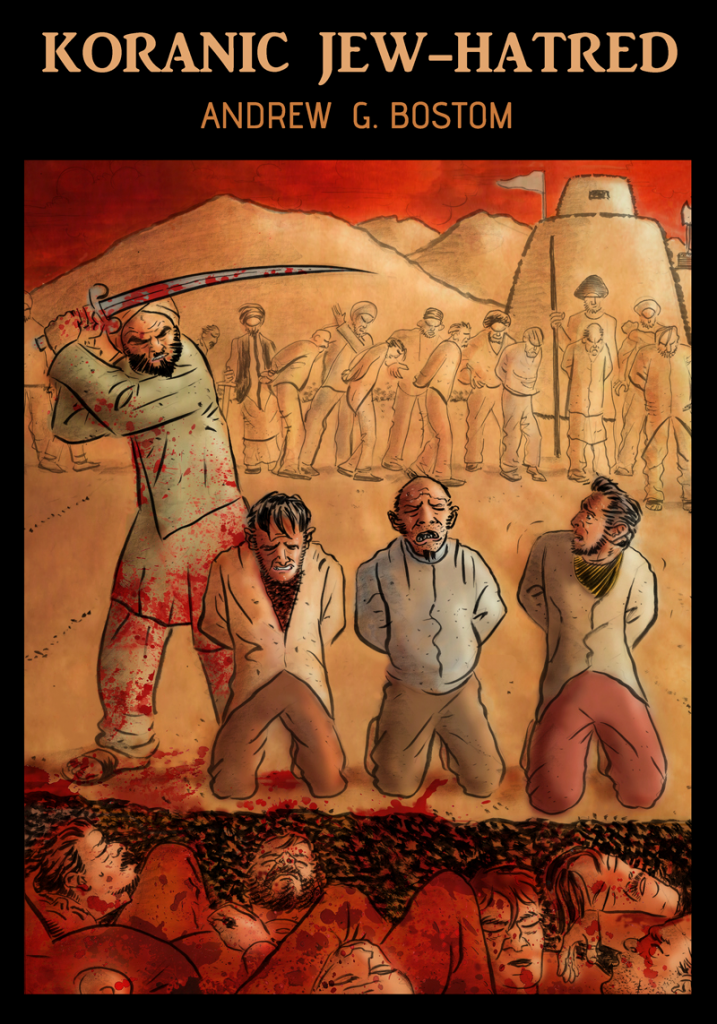 “And He brought down those of the People of the Book who supported them from their fortresses and cast terror in their hearts; some you slew, some you made captive.”—Koran 33:26, Arberry translation [2]

Across a half millennium of authoritative constancy, the seminal 15th century Koranic commentary Tafsir al-Jalalayn [7], and an important 20th century gloss by modern Koranic expert Shabbir Ahmad Usmani (d. 1949) [8], in his Tafsir-e-Umani [8a], make plain that Koran 33:26 (reproduced, above, in two renowned translations) refers to the circumstances of the Medinan Jewish tribe Banu Qurayza alluded to by the good Sheikh “Abu Rajab.” Consistent with its laconic style, Tafsir al-Jalalayn, perhaps the most influential single volume Koranic commentary ever produced, and still in wide use [9], states [10]:

He brought down from their fortresses those of the People of the Book—meaning the Jewish clan of Qurayza—who supported them, and cast terror into their hearts. You killed some of them—meaning the fighters—and some you took prisoner.

Tafsir-e-Usmani confirms the key reference in Koran 33:26 to the Qurayza [11]: “These people are the Jews of Banu Qurayza.” After reiterating the Muslim apologetic narrative justifying the Qurayza’s slaughter for allegedly “betraying” the Muslims, this modern gloss elaborates the following details [12]:

After the Battle of Azhab (the Battle of the Trench; purportedly 627 C.E. [13]), the Holy Prophet was busy taking a bath etc. (when) the (angel) Jibraeel (Jibril) came…and said, “O Messenger of Allah, you have taken off weapons whereas the angels are still armed. The order of Allah is that attack should be made on the Banu Qurayza.” At once (a) proclamation was made that attack shall be made on the covenant breaker Jews of Banu Qurayza. With great rapidity the Islamic Army besieged their fortresses. The siege continued for about 24 or 25 days. At last the surrounded Jews could not endure much (longer), (and) they sent messages to the Holy Prophet. Finally from their side it was announced that they were ready to come out of their fortresses and make Sa’d b. Mu’adh—of the Aus tribe—an arbitrator to decide the matter between them. Any judgment Sa’d pronounced would be accepted by them. The Holy Prophet agreed…Sa’d came and decided as a Muslim arbitrator that all the young men of the Banu Qurayza should be slain and all the women and boys should be made captive and all their wealth and properties should be given to the Muhajirun (i.e., first Muslim converts of Muhammad who accompanied him on the “hijra,” or emigration, from Mecca to Medina). This was a righteous punishment for the betrayal of Allah and His Messenger…According to this judgment hundreds of young Jews were slain, and hundreds of women and boys were made captive, and their wealth and properties came into the possession of the Muslims.

Turning to the sira accounts (i.e., the pious Muslim biographies of Muhammad) of these events [14], the Muslim prophet used the Koranic epithets “apes/monkeys,” and/or “pigs”  (per Koran 2:65 [15], 7:166 [16], 5:60 [17]) to characterize the Qurayza tribe Jewish victims of his jihadist campaign, whose males Muhammad himself subsequently beheaded. Just prior to orchestrating the en masse execution of the adult males from the besieged Medinan Jewish tribe the Banu Qurayza (and distributing their women, children, and possessions as slave “booty” for the Muslims), Muhammad, according to his earliest Muslim biographer, Ibn Ishaq (d. 767/770) addressed these Jews with menacing, hateful derision [18]: “You brothers of monkeys, has Allah disgraced you and brought His vengeance upon you?” (Another early Muslim biographer of Muhammad, Ibn Sa‘d [d. 845], reports [19] that Muhammad stated, “brothers of monkeys and pigs, fear me, fear me!”, while Ibn Kathir’s [d. 1373] biography, states [20], “When the Messenger of Allah alighted at the fortresses, they being high above him, he addressed a group of their nobles at the top of his voice so that they could hear him saying, ‘Respond, you tribe of Jews, you brothers of apes, for disgrace from Allah, Almighty and Glorious is He, has come down upon you.”).

A consensus Muslim account of the massacre of the Qurayza has emerged as conveyed by classical Muslim scholars of hadith (putative utterances and acts of Muhammad, recorded by pious Muslim transmitters), biographers of Muhammad’s life (especially Ibn Ishaq), jurists, and historians [21]. This narrative is summarized as follows: Alleged to have aided the forces of Muhammad’s enemies in violation of a prior pact, the Qurayza were subsequently isolated and besieged. Twice the Qurayza made offers to surrender and depart from their stronghold, leaving behind their land and property. Initially they asked to take one camel load of possessions per person, but when Muhammad refused this request, the Qurayza asked to be allowed to depart without any property, taking with them only their families. However, Muhammad insisted that the Qurayza surrender unconditionally and subject themselves to his judgment. Compelled to surrender, the Qurayza were led to Medina. The men, with their hands pinioned behind their backs, were assembled in a court, while the women and children were said to have been gathered into a separate court. A third (and final) appeal for leniency for the Qurayza was made to Muhammad by their tribal allies the Aus. Muhammad again declined, and instead  appointed as arbiter Sa’d b. Mu’adh from the Aus, who was motivated by his lust for personal vengeance on a tribe which had caused him a painful wound. Predictably, Sa’d Mu’adh soon rendered his concise verdict: The men were to be put to death, the women and children sold into slavery, the spoils to be divided among the Muslims. Muhammad ratified the judgment stating that Sa’d’s decree was a decree of Allah pronounced from above the Seven Heavens. Thus some six hundred to nine hundred men from the Qurayza were led on Muhammad’s order to the Market of Medina. Trenches were dug, and all the men, including barely post-pubescent males were beheaded by Muhammad (per Ibn Ishaq); and their heads, and decapitated corpses were buried en masse in the trenches. Here is Ibn Ishaq’s description [22] of Muhammad’s mass beheading of the Banu Qurayza males—depicted so powerfully by nonpareil artist, and intrepid Albanian Muslim conscientious objector to Islam, Bosch Fawstin [23]:

When they [the men, including post-pubescent boys, of the Jewish tribe] surrendered, and the apostle [i.e., Muhammad] confined them in Medina in the quarter of d. al-Harith, a woman of B. Al-Najjar. Then the apostle went out to the market of Medina (which is still its market today) and dug trenches in it. Then he sent for them and struck off their heads in those trenches as they were brought out to him in batches. Among them was the enemy of Allah Huyayy b. Akhtab and Ka’b b. Asad their chief. There were 600 or 700 in all, though some put the figure as high as 800 or 900. As they were being taken out in batches to the apostle they asked Ka’b what he thought would be done with them. He replied, “Will you never understand? Don’t you see that the summoner never stops and those who are taken away do not return? By Allah it is death!” This went on until the apostle made an end of them.

Male youths who had not reached puberty were spared. Women and children were sold into slavery, a number of them being distributed as gifts among Muhammad’s companions. According to Muhammad’s biographer Ibn Ishaq, Muhammad chose one of the Qurayza women (Rayhana) for himself. The Qurayza’s property and other possessions (including weapons) were also divided up as additional ‘booty’ among the Muslims. Reiterating, the following details have been chronicled consistently by Muslim sources: The arbiter, Sa’d Mu’adh was appointed by Muhammad himself; Muhammad performed the horrific executions (again, per Ibn Ishaq); Muhammad claimed as a wife a woman (Rayhana) previously married to one of the slaughtered Qurayza tribesmen; the substantial material benefits (i.e. property, receipts from the sale of the enslaved) that accrued to the Muslims as a result of the massacre; the extinction of the Qurayza (24).

As reported by M.J. Kister [25], al-Mawardi (d. 1072 C.E.), another eminent Muslim jurist from Baghdad, characterized the slaughter of the Qurayza as a religious duty incumbent on Muhammad. Professor Kister quotes al-Mawardi as follows [26]: “…it was not permitted (for Muhammad) to forgive (in a case of ) Allah‘s injunction incumbent upon them; he could only forgive (transgressions) in matters concerning his own person.” The notion that this slaughter was sanctioned by Allah as revealed to Muhammad was, according to Kister, reflective of, “…the current (as of 1986) Sunni view about the slaughter of the Banu Qurayza [27].” In the immediate aftermath of the massacre, the Muslims benefited substantially from the Qurayza‘s assets which they seized as booty. The land and property acquired helped the Muslims gain their economic independence. The military strength of the Muslim community of Medina grew due to the weapons obtained, and the fact that captured women and children taken as slaves were sold for horses and more weapons, facilitating enlargement of the Muslim armed forces for further conquests. Conversely, the Jewish tribe of the Qurayza ceased to exist [28]. More broadly, Abu Yusuf (d. 798), the prominent Hanafi jurist who advised Abbasid Caliph Harun al-Rashid (d. 809), made the following observations about how Muhammad’s treatment of the subdued Qurayza Jews informed Muslim jurisprudence on dealing with enemy captives of jihad campaigns [29]:

Whenever the Muslims besiege an enemy stronghold, establish a treaty with the besieged who agree to surrender on certain conditions that will be decided by a delegate, and this man decides that their soldiers are to be executed and their women and children taken prisoner, this decision is lawful. This was the decision of Sa’ad b. Mu’adh in connection with the Banu Qurayza…it is up to the imam to decide what treatment is to be meted out to them and he will choose that which is preferable for religion and for Islam. If he esteems that the execution of the fighting men and the enslavement of their women and children is better for Islam and its followers, then he will act thus, emulating the example of Sa’ad b. Mu’adh.

[25] Kister, “The massacre of the Banū Qurayzạ: a re-examination of a Tradition,”