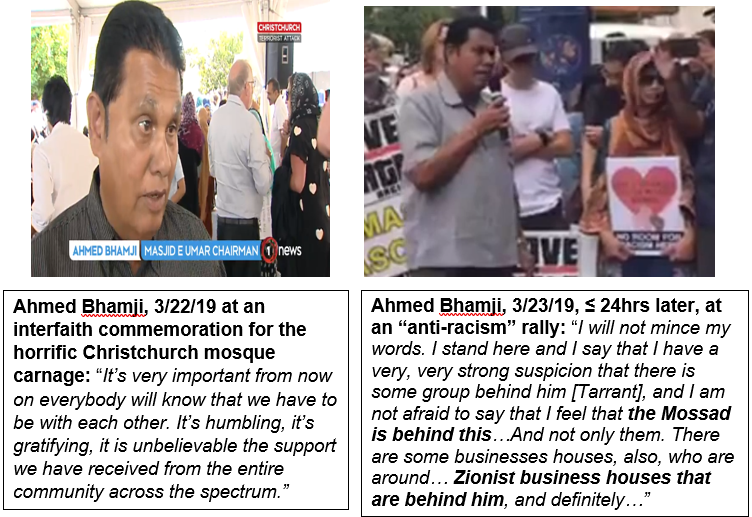 NOTE: A version of this essay appeared at Brietbart News. I requested that this version be taken down because without my permission edits were made which deliberately obfuscated the direct linkage between mainstream (i.e., by inserting the word “radical”) Islamic doctrine, and its mainstream avatars, such as Turkish President Erdogan, and the ubiquitous phenomenon of Muslim Jew-hatred. The concluding discussion which hinged upon Maimonides relevant observations was also omitted. Just below is a screenshot of the title of that Breitbart posting: 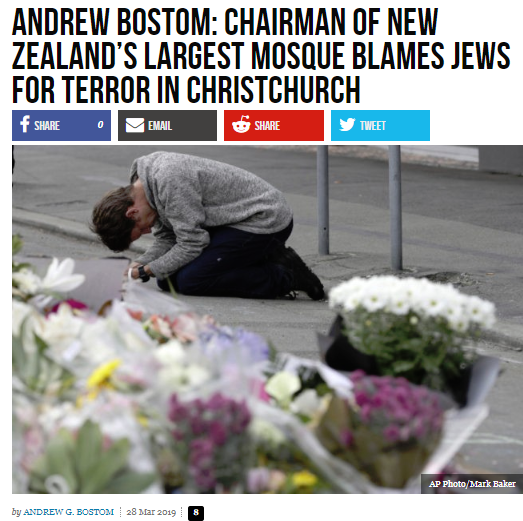 Here is the full essay as originally submitted, and posted at this blog:

It’s very important from now on everybody will know that we have to be with each other. It’s humbling, it’s gratifying, it is unbelievable the support we have received from the entire community across the spectrum.

Indeed New Zealand’s miniscule Jewish community (< 7,000 per the 2013 census) offered immediate condolences, and set up fundraising channels for the ~ 7-times larger NZ Muslim community, following the Christchurch mosque attacks. Moreover, Israel’s Prime Minister Netanyahu immediately condemned the “brazen act of terror,” which caused “wanton murders of innocent worshippers in Christchurch,” while adding, “Israel sends its condolences to the bereaved families and its heartfelt wishes for a speedy recovery to the wounded.”

Notwithstanding these local and international expressions of Jewish sympathy and support, within 24-hours Ahmed Bhamji abandoned his ecumenical tone during a March 23, 2019 “anti-racism” rally attended by over 1000 protesters in Auckland, NZ, and livestreamed on Apna TV (NZ)’s Facebook page. Launching into a Jew-hating diatribe—sadly prototypical of the global pandemic of conspiratorial Islamic Jew-hatred—Bhamji proclaimed:

I will not mince my words. I stand here and I say that I have a very, very strong suspicion that there is some group behind him [Tarrant], and I am not afraid to say that I feel that the Mossad is behind this…And not only them. There are some businesses houses, also, who are around… Zionist business houses that are behind him, and definitely…

I am asking: Who was [the NZ mosque attacker] working for? The Christians are not hostile to the Muslims, as it is said in the Koran [5:82  ]: “You shall find the people strongest in enmity towards the believers to be the Jews and the polytheists, and you shall find the nearest among them in love to the believers to be those who say: ‘We are Christians.’” We are talking about a Christian country. So where did the Jews come from? We are not talking about Gaza. No, we are talking about Australia [sic; NZ]. As I’ve said before, this aggression [in NZ] was meant to incite Christians and Muslims against one another. The Jews are the ones who stand to gain. Even if the perpetrator was not Jewish, he was acting in the interest of the Jews, because he was fanning the flames of enmity between Christians and Muslims. The truth is that the Jews are enemies of both the Christians and the Muslims. They are the ones who claimed that they killed [Biblical prophets; Koran 2:61, 3:112  , 4:155 ] Christ, and they killed John the Baptist. Who tried to poison the Prophet of Islam [in the traditions and earliest pious Muslim biographies of Muhammad ] if not the Jews ?

They (Jews] killed prophets [Koran 2:61, 2:91, 3:112, 4:155].  I doubt there is an ummah [religious community] which is worse than this ummah [the Jews] from the entire creation of Allah as far as human beings are concerned. There is nobody worse than Banu Israel [i.e., Jews]”…If you know how much they [Jews] hate us [Muslims] you would never have a single moment in your life where you would rest. But you would be fully awake finding out ways to protect and defend your honor which Allah has given you. And there is no honor better than the honor of Islam, which Allah has given to you. Allah made it very clear when he said [invoking Koran 5:82, a pivotal Jew-hating verse in the lengthy Koranic litany of Jew-hatred], that you [Muslims] will [know] “that those who are the most severe enemies of Muslims are those who call themselves Jews.”

Sheikh Sahib is still “teaching” at Masjid at Taqwa in Auckland, NZ.

Medieval philosopher and sage, Maimonides, understood the practical implications of such inveterate Islamic Jew-hatred, as recorded in his 1172 C.E., “Epistle to the Jews of Yemen”:

Never did a nation molest, degrade, debase and hate us as much as they …. Although we were dishonored by them beyond human endurance, and had to put with their fabrications, yet we behaved like him who is depicted by the inspired writer, “But I am as a deaf man, I hear not, and I am as a dumb man that openeth not his mouth.” (Psalms 38:14). Similarly our sages instructed us to bear the prevarications and preposterousness of Ishmael in silence. They found a cryptic allusion for this attitude in the names of his sons “Mishma, Dumah, and Massa” (Genesis 25:14), which was interpreted to mean, “Listen, be silent, and endure.” (Targum Pseudo-Jonathan, ad locum). We have acquiesced, both old and young, to inure ourselves to humiliation, as Isaiah instructed us “I gave my back to the smiters, and my cheeks to them that plucked off the hair.” (50:6). All this notwithstanding, we do not escape this continued maltreatment which well nigh crushes us. No matter how much we suffer and elect to remain at peace with them, they stir up strife and sedition

Tragically, this dynamic of Jewish placation of Islam’s intrinsic, religiously-inspired Jew-hatred—an understandable survival tactic in 1172—persists despite dramatically changed circumstances some 850 years later, and regardless, but for the existence of Israel, would result in the destruction of Jewry by jihad.