This autopsy report, if independently validated, has profound implications for the putative association between covid-19 mRNA vaccination, in particular with the Pfizer and Moderna vaccines, and the broad development of inflammatory atherothrombotic vascular outcomes, not just myocarditis.

Overview: “In this study, detailed histopathologic analyses of the heart were undertaken in a 55-year old patient who died four months after mRNA vaccine booster. The cause of death as stated at autopsy was acute myocardial infarction and lymphocytic myocarditis associated with spike protein detected in the respective tissue. The results indicate that both myocarditis and thromboembolic events derived from a hyperinflammatory, excessive immune response to the mRNA-vaccine BNT162b2 (Pfizer-BioNTech) against COVID-19.”

(Astra-Zeneca) in May 2021, and with BNT162b2 mRNA vaccine (Pfizer-BioNTech-COMIRNATY) in July 2021, according to a copy of the vaccination book. The patient died in November 2021. An autopsy diagnosis was general atherosclerosis. The cause of death was acute myocardial infarction and lymphocytic myocarditis. The lumen was occluded with a platelet thrombus on an atherosclerotic bed in the right coronary artery. This condition was associated with a significant lymphocytic vasculitis of the vasa vasorum.”

Vascular tissue: “Histopathological examination revealed moderate arterio-arteriolosclerosis of the renal arteries, cervical arteries, cerebral basal arteries, thoracic aorta, ascending aorta, and aortic arch as well as high-grade nodular arteriosclerosis of the abdominal aorta and iliac arteries. In addition, there was lymphocytic vasculitis of the vasa vasorum and lumen-occlusive platelet thrombus in histological examination. Furthermore, there were features of lymphocytic myocarditis.”

Immunohistochemistry: “The immunohistochemical staining of the right cardiac artery (RCA) tissue showed thrombus formation on atherosclerotic bases along with arteritis in the media with lymphocytic and histiocytic infiltration as well as periarteritis in the adventitia with CD4 T helper cell and CD8 killer cell infiltration at the level of the thrombus formation. The intima of the RCA showed inflamed atherosclerotic plaques with lymphocytic infiltration (Figure 4). SARS-Cov2-Spike protein was detected by DAB immunostaining (Figure 5) but SARS-Cov2-nucleocapsid protein was not (Figure 6). Thrombus formation, rich in platelets and lymphocytes, was detected in the lumen of the RCA, the attributed small coronary vessels (arteritis), and blood capillaries (periarteritis) at the level of the occluded thrombus of the RCA.” 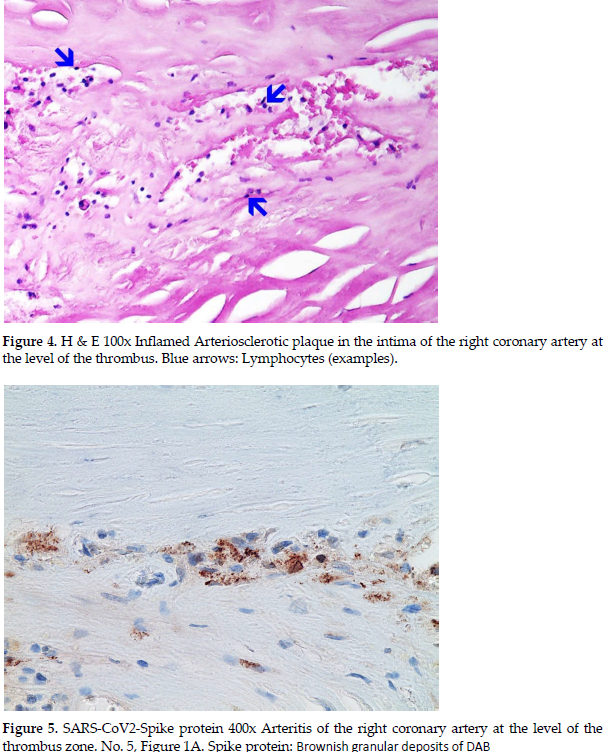 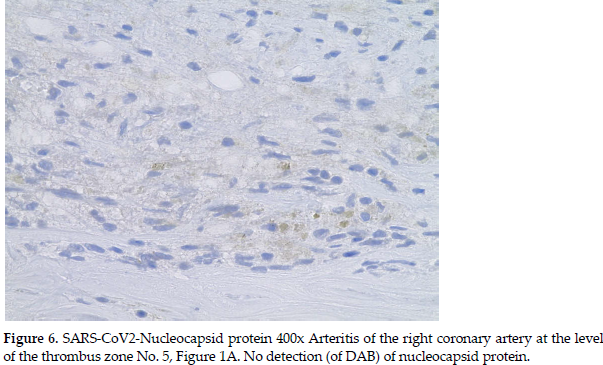 Discussion: “The autopsy study of a 55-year-old deceased person revealed evidence of thrombus formation in the large RCA, small arterial branches, and arterial capillaries that could not be attributed to atherosclerosis plaque rupture. Moreover, there was inflammatory cell infiltration including CD4 and CD8 T cells and histiocytes which is typical of an autoimmune reaction. The histopathological examinations revealed the extensive presence of scattered fibrotic areas, indicating that cardiac cell necrosis had occurred at these sites

during a time period well preceding death. The abundance of small fibrotic scars, in combination with fresh inflammatory lesions,, as revealed in this study, has never been described in any cardiac affliction hithertofore.

A crucial finding, in this study, was the detection of spike protein by immunohistochemistry in the vascular and cardiac tissue in the absence of the nucleocapsid protein… The current study has demonstrated the presence of thrombus formation not only in the lumen of the RCA but also in the vasa vasorum and capillaries of the RCA itself. These findings, to the best knowledge of the author, have never been described in the literature and cannot be attributed to atherosclerotic plaque rupture. The abundance of inflammatory cells points to the autoimmune nature of the event that most probably is triggered by the spike protein whose expression is induced in endothelial and myocardial cells. The parallel presence of aged and fresh myocardial lesions indicates that tissue damage occurs repeatedly over extended periods, probably in response to vaccination boosters.”

Conclusions: “The results of the presented histopathological analyses strongly suggest an autoimmune origin of myocarditis, arteritis and AMI in a patient who had received the ChAdOx1 nCov-19 vector vaccine (Astra-Zeneca) initially, followed by a second vaccination with the BNT162b2 mRNA vaccine (Pfizer-BioNTech) against COVID-19. The compelling consideration of a causal link between the gene-based-vaccinations and the diagnostic findings stems from the detection of SARS-CoV2-Spike protein in the absence of SARS-CoV-2 nucleocapsid in the cardiac tissue, the occurrence of vasculitis and perivasculitis with thrombus formation at multiple sites, infiltration of the myocardium by inflammatory cells, and the simultaneous presence of reticular scarred tissue alongside with sites of ongoing cell destruction. In the particular case it has to be considered that the manifest adverse events have to be attributed rather to the second gene-based vaccination with the BNT162b2 mRNA vaccine, which has been applied as a booster to the earlier vaccination with the ChAdOx1 nCov-19 vector vaccine, due to the assumption of a comparably low immune response commonly found after an initial gene-based vaccination against Covid-19. Thus, further investigations into the possibility that adverse events following application of gene-based vaccines may derive from an excessive immune response are urgently called for.”