VIDEO: Statistics Sweden Demographer Orjan Hemstrom on Sweden’s 2020 total mortality. “We are back to the mortality of 2012…excess mortality is the same as it was a decade ago” 1918 flu pandemic far worse than covid-19

Posted on 3rd March 2021 | Comments Off on VIDEO: Statistics Sweden Demographer Orjan Hemstrom on Sweden’s 2020 total mortality. “We are back to the mortality of 2012…excess mortality is the same as it was a decade ago” 1918 flu pandemic far worse than covid-19 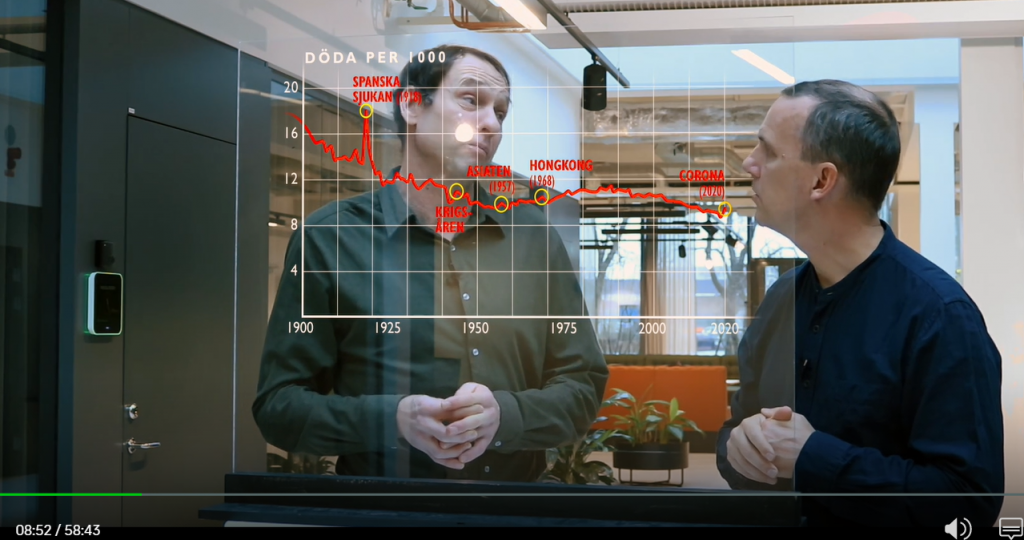 (Interviewer) But how many more than usual died during the Corona year of 2020? To find that out we asked the demographer Örjan Hemström from Statistics Sweden, who researches mortality. During this year of the pandemic — how many more died?

(Hemstrom) Approximately 7,000 more than the last five years. But it was up and down during the year.

(Interviewer) Can you show us?

(Hemstrom) In the beginning we had fewer dead than in recent years. But at the end of March we saw a big rise, and we had an excess mortality up until June.  But from July to October it was back to normal, I mean as few or fewer dead than in the years prior. And then in November and December we see again that the number of deaths has risen. So, in total around 7,000 more than the last few years.

(Interviewer) But does 2020 stand out regarding mortality historically?

(Hemstrom) Then we need to compare the number of deaths to the size of the population to better compare different years.  From 1900 we see quite a high mortality that went down until we see this major increase 1918, with this big spike.

(Interviewer) And that is the Spanish Flu, that horrible flu?

(Hemstrom) Exactly. That is the worst pandemic we’ve had, that took the most lives  since 1900. After that mortality decreased until WW2 where we see it goes up and down and then it goes down again until the Asian Flu, but you can hardly see it.

(Interviewer) It was no big increase. That was in the late 1950s?

(Hemstrom) Exactly, the late 50s. In the late 60s we also had a big pandemic — the Hong Kong flu.

(Interviewer) That does not show very much either — a small ripple on the surface.

(Hemstrom) Yes. From 1990 and onwards we see a clear decrease in mortality, fewer dead per capita. And then 2020 we see a spike.

(Interviewer) But if you compare to the Spanish flu the mortality was very much higher?

(Hemstrom) Yes, many more deaths in 1918 than in 2020. Especially in proportion to the population, which was millions fewer in 1918.

(Interviewer) The curves thus show that the level of excess mortality is the same as it was a decade ago, and in a longer perspective mankind has suffered worse pandemics than the one we are in now.