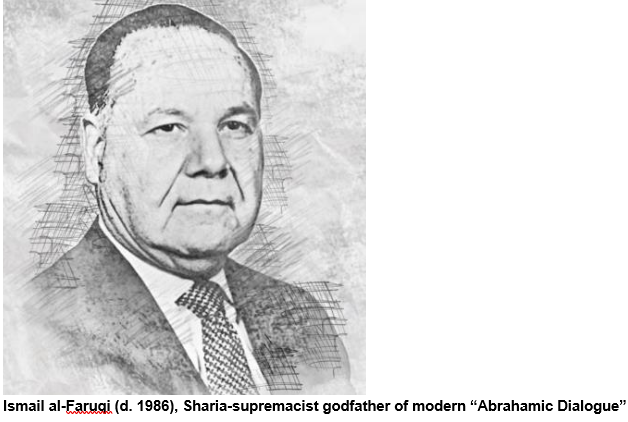 The embrace of “Abrahamism” as an overarching paradigm for interfaith dialogue, epitomized by the U.S. Department of State-supported Abrahamic Faiths Initiative, is fraught with existential dangers for Christians and Jews.

At its core, Abrahamism is unabashed theological Islamic supremacism—rooted in Koran 3:64 to 3:68, especially 3:67—and the classical-cum-modern authoritative Koranic exegeses on these verses.

Late Al-Azhar University Grand Imam, and seminal modern Koranic commentator, Muhammad Sayyid Tantawi (d. 2010), illustrates these enduring trends, till now, including their association with canonical Islamic Antisemitism. Tantawi’s authoritative gloss on Koran 3:67 from his magnum opus Koranic commentary, The broad interpretation of the holy Koran,  re-affirms the supremacy of the claim of Islam, and Muslims, to Abraham, and ends with a statement of conspiratorial Islamic Jew-hatred:

“This noble verse [Koran 3:67] mentions Abraham and exposes those unbelievers from the People of the Book [Scripture] who claimed the Abraham was a Jew or a Christian as it shows that, unlike Abraham, it was they who were polytheists…There is an insinuation here concerning the Islamic nation (Umma) and an acknowledgment that the followers of Muhammad are more worthy of being affiliated with Abraham than the People of the Book because the believers sought the truth and believed in it. Conversely, the People of the Book sought worldly and material things in place of things heavenly and spiritual. They forsook the truth and went after their lusts and desires…After these repeated appeals to the People of the Book, and after all the brilliant arguments and proofs presented to vouch for the validity and truthfulness of this religion [Islam], and after all the reprimands and admonitions hurled at them for turning away from the truth and turning others from it as well, the Koran recounted some of the malicious paths that the Jews embarked upon to deceive and deal with Islam and Muslims with craftiness and cunningness.”

Al-Azhar University-trained American Professor of Islamic Studies, and History of Religions, Ismail al-Faruqi, applied this theology, directly, as the godfather of the contemporary “Abrahamic faith” model for interfaith dialogue. Entirely consistent with the reasoning—and dictates—of canonical Islam, the “Faruqi rules” for Abrahamic dialogue extolled Koran 3:67 and its historical implementation under Sharia-based Muslim rule, barred criticism of Islam, and excoriated imperialism, colonialism, and Zionism as Western perturbations of this perfect Islamic order.

“Islam’s theory of other faiths, backed by the experience of fourteen centuries still commands the loyalty and support of a billion Muslims around the world…If inter-religious dialogue is to move beyond the exchange of information and courtesies, it has to have a religious norm in terms of which it can compose the differences between the religions. This religious norm must be common to the dialoguing parties. Islam finds this norm in din al-fitrah (i.e., Islam, the primal religion common to humanity)…Islam’s suggestion [was] that the religious tradition is a human outgrowth from primal din al-fitrah. It was this [an] Islamic idea…An Abrahamic unity of Judaism, Christianity, and Islam based on the Hanifi religion [see Koran 3:67] of Abraham, the din al-fitrah, is a real possibility. It did in fact exist in the Muslim world, until Western imperialism, colonialism, and Zionism came to subvert it. Their effort has been in vain. The Muslim will continue to believe in and work for this unity, confident that his God [i.e., Allah!] Whom he knows to be one as truth is one, and the moral law is one, cannot but desire one religion…[T]he Islamic stand toward other faiths, having brought all faiths under a single roof or din al-fitrah, satisfies the only condition for constructive dialogue and inter-relation…Compared with the histories of other religions, the history of Islam is categorically white as far as toleration of other religions is concerned…Nothing is farther from the truth and more inimical to Muslim-non-Muslim relations than the claim that Islam spread by the sword.”

Faruqi’s parameters for interfaith dialogue under the rubric of Abrahamism precludes discussion—let alone remedy—of Islam, and its Sharia, as the ideological source of rampant persecution of Christians, which is disproportionate in Muslim societies, reaching near genocidal levels in some. The ongoing acquiescence of Christian religious and diplomatic leaders to this ugly dynamic—now “updated” to include the Abrahamic Faiths Initiative—constitutes nothing less than an existential threat to Christian communities within Islamdom, and potentially, beyond those borders.

Moreover, once again in accord with canonical Islam’s jihad to create an Islamic world order, Faruqi conjoined Abrahamism to the jihad to “dismantle the Zionist State” of Israel. Faruqi’s obsessive Anti-Zionism in fact comports with his larger, traditional Islamic vision of anti-nationalism, recreating a solidary global umma, Muslim community—an Islamic State under the Sharia. This idealized Islamic State, extending from “the Atlantic (Ocean) to the Malay Basin,” Faruqi argues, would constitute a “haven” for a forcibly de-Zionized “world Jewry” relegated back to “dhimmi communities” of “the Islamic state”.

“The Islamic  position leaves no chance for the Zionist State but to be dismantled and destroyed, and its wealth confiscated to pay off is liabilities. This obligation—to repel stop, and undo injustice is a corporate religious obligation (fard kifayah) on the ummah, and a personal religious obligation (fard ayn) on every able adult Muslim man or woman in the world until the ummah has officially assumed responsibility for its implementation. Defense of the ummah, i.e., of every province of over which the banner of the Islamic State has once been raised, is jihad, or holy war, and it is a prime religious duty, Fulfillment of this duty is falah (felicity) in this world and the next, i.e., victory in this world, martyrdom and paradise in the other (Koran 3:169)…Allah commands the Muslims ‘to avail themselves of all means and instruments of force in order to overwhelm the enemy and bring the war to a quick end” (Koran 8:60).’…[D]ismantling the Zionist State does not necessarily mean the destruction of Jewish lives or of properties. Such destruction will, however, be regarded by Islam as necessary evil in case Zionist forces resist the dismantling and seizing process…Islam equally commands its adherents to spare no effort, no materiel, no wealth needed to bring the war to victorious conclusion. It lays no time limit on the declaration or conduct of the war; for a moral religious obligation is ex hypothesi timeless.”

“The injustice perpetrated by Zionism is so complex, so compounded and so grave that there is practically no means of stopping or undoing it without a violent war in which the Zionist army, state, and all of its public institutions would have to be destroyed…All Zionists who wish to live within the Muslim World would have to de-Zionize themselves, emigrate, or face prosecution for Zionist activities…Islam will condemn a Zionist State even if it were set up on an isolated island or on the other side of the moon…The cause of Islam is universal, The truth and value which Allah granted through Islam is meant for all mankind, not merely for the Arabs, Semites, or the Asians. The moral and religious imperatives deriving from the Islamic revelation are valid—and hence, obligatory—for all men…It is not therefore beyond the jurisdiction of the Islamic State to transcend its own frontiers and to wage jihad or holy war against such Zionist State wherever it may set up its house…”

“Certainly, the Jew has been victim of injustice in the West; and certainly, the Muslim is enjoined by Allah to come to his rescue, to relieve him from suffering and to help him achieve his freedom, security and peace. There can be no doubt, Islamically speaking, that the World of Islam is religiously bound to champion the Jewish cause against Christendom…Islam offers a perfect solution to the Jewish problem which has beset the Jews and the West for two millennia…As to those Jews who desire to emigrate from the West, they ought to be welcome in the Muslim World…On this question of Jewish immigration Islam gives far more to world Jewry than Zionism. The latter wants only Palestine; Islam forces wide open the gates of the whole Muslim World…[A]n Islamic State whose constitution is the Koran, whose law is the Sharia, and whose constituency is only partly non-Muslim…extending from the Atlantic to the Malay Basin, is certainly obliged to open its gates to any Jewish immigrant who travels thither. Such an Islamic State is the haven for world Jewry, as well as the protector and defender of prophecy and its peoples against all outside attack…Endowed with the life-and world -affirming ideology that Islam is…[L]asting peace cannot be assured to the Jews anywhere except by Islam and under its political dominion. The relation of Islam to Judaism being one of sympathy, nay of identity, Islam’s religious honoring of the Hebrew prophet’s as Allah’s prophet’s and of the Hebrew revelation as Allah’s revelation furnishes the best guarantee.”

Past as prologue, historian Bat Ye’or warned during 1997 Congressional testimony about the resurgence of Sharia-based religious persecution of Christians, and its linkage to annihilationist Anti-Zionism, in the Middle East. Feckless Christian and Jewish theologians and diplomats who persist in blindly facilitating the goals of “Abrahamic dialogue”—submitting to an Islamic order—are abetting genocidal Christian persecution, and the destruction of Israel.