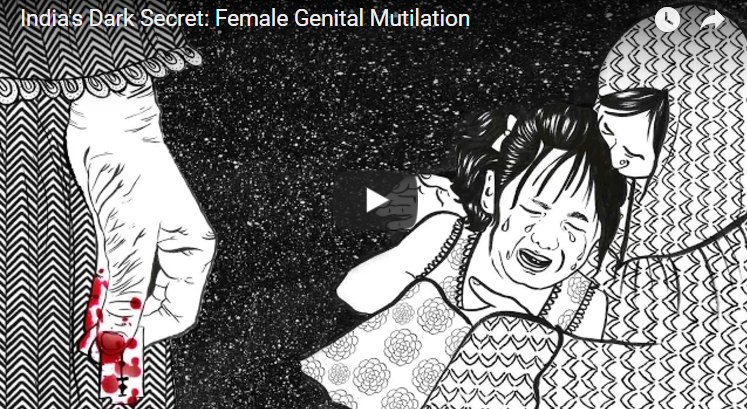 Federal prosecutors have indicted six Detroit area members of the Ismaili Shiite Muslim minority Bohra community—including two MDs—for subjecting young girls to female genital mutilation (FGM) procedures. The six are charged with 9 counts of conspiring, committing, and concealing acts of FGM, which is illegal in the U.S. (per 18 U.S. Code § 116). Preliminary physical findings made public from genital examinations of two of the child victims revealed,

While six child victims have been identified thus far, Assistant U.S. Attorney Sara Woodward has disclosed that defendant Dr. Jumana Nagarwala may have performed some 100 FGM procedures on young girls during the past 12-years.

Moreover, why do FGM rates persist at such high levels in both the “global” Bohra Muslim community (primarily within India), i.e., ~70-80%, and even among 80% of Canadian Bohra Muslim women?

…the Daim al-Islam, a religious text followed by this community endorses the practice.

Ali: He said, “O women, when you circumcise your daughters, leave [part of the labia or clitoris]. For this will be chaster for their character and it will make them more beloved by their husbands”. He also said, “Hasten with the circumcision of your children, for it indeed leads to greater purity.” He said, “A girl should not be circumcised until she is 7 years old.”

Not surprisingly, Bohra Muslim women who have come forth bravely to reject this misogynistic barbarity, decry how this form of FGM—like all others—is designed to suppress female sexuality. The goal of reducing female “concupiscence”—“unbridled lust,” or mere sexual pleasure, derived from a fully intact clitoris—demonstrates how minority Bohra Muslim/Shiite Ismaili Islamic law converges with the much larger mainstream corpus of majority Sunni Islamic law on FGM/ “female circumcision” [FGM/C].

Umm Atiyyah al-Ansariyyah said: A woman used to perform circumcision in Medina. The Prophet said to her: “Do not cut severely as that is better for a woman and more desirable for a husband.” [Sunan Abu Dawud, Chapter 1888, “Circumcision of Girls”, Number 5251, from Sunan Abu Dawud, one of the six canonical hadith collections, English translation with Explanatory notes by Prof. Ahmad Hasan, 2007, Volume III, p. 1451; this hadith is also available online here, as Book 41, Number 5251]

Al-Jahiz (d. 869), the great Muslim theologian and polymath, citing the canonical tradition of Muhammad, maintained that female circumcision was specifically employed as a means to reduce female “concupiscence,” This argument is repeatedly invoked by classical Muslim jurists, and remains at present the most frequently cited rationale for circumcision of Muslim women, including from respected Al-Azhar clerics/“Professors,” Al Azhar University and its mosque representing the pinnacle of Sunni Islamic religious education, the de facto Vatican of Sunni Islam. The late Jad al-Haq (d. 1996) who served as Grand Imam of Al-Azhar and as such was a Sunni Muslim Papal equivalent, insisted the present era makes female circumcision requisite,

because of mixing of the sexes at public gatherings. If the girl is not circumcised, she subjects herself to multiple causes of excitation leading her to vice and perdition. [Jad al-Haq, 1983, Khitan al-banat, in: Al-fatawi al-islamiyyah min dar al-ifta al-masriyyah, Vol. 9, p. 3124, translated here]

…founded to provide guidance for Muslims living in North America…AMJA is a religious organization that does not exploit religion to achieve any political ends, but instead provides practical solutions within the guidelines of Islam and the nation’s laws to the various challenges experienced by Muslim communities…

A report in The Muslim Observer published October 21, 2010 highlighting AMJA’s “seventh annual American conference of imams,” and the fact that “a list of scholars associated with it which stretches from Al-Azhar University to Virginia’s Open University, and back across the ocean to the professors at Saudi universities,” confirmed that the organization is accepted as such by the mainstream American Muslim community. AMJA rulings clearly support the practice of FGM/C. A fatwa from Dr. Hatem al-Haj justified the horrific practice, by citing the canonical hadith in which Islam’s prophet Muhammad endorsed its practice. Al-Haj then went on to implicitly justify the practice of taking a Muslim female outside of her American milieu to have the procedure performed—in violation of the US “TRANSPORT FOR FEMALE GENITAL MUTILATION” act. A concordant fatwa issued in Arabic on the website of the Secretary-General of AMJA and the chief member of its Resident Fatwa Committee, Dr. Salah Al-Sawy, declared that FGM was “an honor” for women, Al-Sawy also acknowledged that the procedure—in accord with a continuum of Islamic rationale from al-Jahiz in the mid-9th century, to former Muslim Papal equivalent, i.e., Al-Azhar University Grand Imam Jad al-Haq through 1996—is explicitly implemented to reduce a woman’s otherwise unbridled “concupiscence,” i.e., lust:

But for the woman, the purpose [of circumcision] is the benefit that it has in lessening her lust, which is a wholesome request. There is no harm in removing it. In short, female circumcision is an honor (which) does not rise to the level of a duty, in clear language.

FGM as performed by the Bohra Muslim MDs of metropolitan Detroit comports with the Islamic law sanction of FGM worldwide—a practice dominated by Muslim societies, and even Muslim minorities within multi-religious societies, which global UNICEF data, and now data from our own U.S. Centers for Disease Control demonstrate, irrefragably. It is chilling to witness American Muslim MDs—clearly motivated by authoritative, doctrinal Islam—persist in this ugly practice despite U.S. legal prohibition, and the moral depravity of the procedure, vis-à-vis their own professional code of ethics.