WMD or “Democratization”? Bush II and the Iraq Invasion

Posted on 17th February 2016 | Comments Off on WMD or “Democratization”? Bush II and the Iraq Invasion 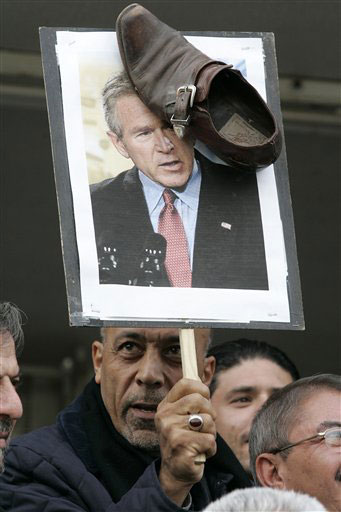 I maintain that dispassionate analysis reveals Iraq was invaded on the basis of a dangerously misguided utopian mindset aggressively inculcated within eight days of the cataclysmic September 11, 2001 jihad terror attacks. Moreover, the abject failure of the Bush II administration to eliminate Iran’s much more tangible nuclear weapons of mass destruction (WMD) threat—clearly evident before, during, and after the Iraq invasion—objectively validates my argument.

Eight days after the Sept. 11 [2001] attacks, with the Pentagon still smoldering, Mr. Lewis addressed the U.S. Defense Policy Board. Mr. Lewis and a friend, Iraqi exile leader Ahmad Chalabi –now [circa 2/2004] a member of the interim Iraqi Governing Council—argued for a military takeover of Iraq to avert still-worse terrorism in the future, says Mr. [Richard] Perle, who then headed the policy board…

Call it the Lewis Doctrine. Though never debated in Congress or sanctified by presidential decree, Mr. Lewis’s diagnosis of the Muslim world’s malaise, and his call for a U.S. military invasion to seed democracy in the Mideast... As mentor and informal adviser to some top U.S. officials, Mr. Lewis has helped coax the White House to shed decades of thinking about Arab regimes and the use of military power. Gone is the notion that U.S. policy in the oil-rich region should promote stability above all, even if it means taking tyrants as friends. Also gone is the corollary notion that fostering democratic values in these lands risks destabilizing them. Instead, the Lewis Doctrine says fostering Mideast democracy is not only wise but imperative.

A few months later, in a private dinner with Dick Cheney at the vice president’s residence, Mr. Lewis explained why he was cautiously optimistic the U.S. could gradually build democracy in Iraq, say others who attended. Speaking on NBC’s “Meet the Press” just before the invasion of Iraq, Mr. Cheney said: “I firmly believe, along with men like Bernard Lewis, who is one of the great students of that part of the world, that strong, firm U.S. response to terror and to threats to the United States would go a long way, frankly, toward calming things in that part of the world.”…

In Sharia Versus Freedom, I reviewed Lewis’s troubling intellectual legacy regarding four critical subject areas: the institution of jihad, the chronic impact of the Sharia on non-Muslims vanquished by jihad, sacralized Islamic Jew-hatred, and perhaps most importantly, his inexplicable 180-degree reversal on the notion of “Islamic democracy.” Lewis’ rather bowdlerized analyses are compared to the actual doctrinal formulations of Muslim legists, triumphal Muslim chroniclers celebrating the implementation of these doctrines, and independent Western assessments by Islamologists (several of whom worked with Lewis, directly, as academic colleagues; discussed at length here) which refute his sanitized claims.

Journalist David Warren, writing in March 2006, questioned the post-9/11 advice given President George W. Bush “on the nature of Islam” at that crucial time by not only “the paid operatives of Washington’s Council on American-Islamic Relations, and the happyface pseudo-scholar Karen Armstrong,” but most prominently, one eminence grise, in particular: “the profoundly learned” Bernard Lewis. All these advisers, despite their otherwise divergent viewpoints, as Warren noted, “assured him (President Bush) that Islam and modernity were potentially compatible.” None more vehemently—or with such authority—than Bernard Lewis. Arguably the most striking example of Lewis’s fervor was a lecture he delivered July 16, 2006 (on board the ship Crystal Serenity during a Hillsdale College cruise in the British Isles) about the transferability of Western democracy to despotic Muslim societies, such as Iraq. He concluded with the statement, “Either we bring them freedom, or they destroy us.” This stunning claim was published with that concluding remark as the title, “Bring Them Freedom Or They Destroy Us,” and disseminated widely.

While Lewis put forth rather non sequitur, apologetic examples in support of his concluding formulation, he never elucidated the yawning gap between Western and Islamic conceptions of freedom — hurriyya in Arabic. This latter omission was particularly egregious given Professor Lewis’s contribution to the official (Brill) Encyclopedia of Islam entry on hurriyya. Lewis egregiously omitted not only his earlier writings on hurriyya but what he had also termed the “authoritarian or even totalitarian” essence of Islamic societies, comparing Islam to Communism, and Muslim Sharia states, to Communist states.

The deleterious impact of Lewis’ “guidance,” despite his own irreconcilably contradictory views, may even have been conjoined to a pro-Iranian influence operation by Lewis accomplice Ahmad Chalabi see (here; here; here; here). Regardless, while the CIA’s own 2006 assessment concluded that Iraq did not have an active WMD program, the Bush II administration refused to address Iran’s overt nuclear WMD-related facilities. Hence despite the disclosure of two major Iranian nuke facilities in August, 2002—the Natanz uranium enrichment site, and the Arak plutonium reactor—the Bush II administration ignored these much more concrete nuclear WMD-related findings, and went ahead and invaded Iraq 7-months later, the following spring of 2003.

Gates writes that his most effective argument was that an Israeli attack on Iran that overflew Iraq would endanger what the surge had achieved with Baghdad. Bush then “emphatically said he would not put our gains in Iraq at risk,’ according to Gates.

Finally, in May, 2012, George W. Bush appeared to have learned nothing from the Iraq democratization debacle, and how it repudiated his blind adherence to the “Lewis Doctrine.” Mr. Bush had the temerity to hector critics who did not share his ebullient cognitive dissonance about the then unfolding so-called Arab Spring phenomenon. He intoned,

Some look at the risks inherent in democratic change, particularly in the Middle East and North Africa, and find the dangers too great. America, they argue, should be content with supporting the flawed leaders they know, in the name of stability.

Mr. Bush also made the outrageous claim that the, de facto Springtime for sharia in Araby was tantamount to “the broadest challenge to authoritarian rule since the collapse of Soviet Communism.”