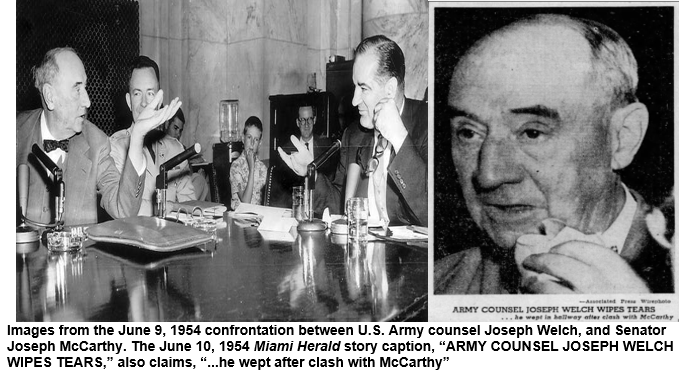 Friday night, December 2, 2022, Twitter’s new owner Elon Musk released emails demonstrating the company’s prior explicit collusion with Joe Biden’s 2020 presidential campaign to suppress the Hunter Biden laptop story. Musk chose reporter Matt Taibbi to disseminate these emails on Twitter. Taibbi’s Twitter thread included the revelation that outspoken conservative actor, Rhode Islander James Woods, was caught up in this censorship, the Democratic National Committee (DNC) having requested the removal of one of his tweets on the subject, from October, 2020.

Appearing with Tucker Carlson live that same Friday evening, Woods insisted he would sue the DNC for its censorious effort to silence him. During his lengthy diatribe, Woods opined,

“I will quote the immortal words of [then U.S. Army legal counsel] Joseph Welch when he attacked [Wisconsin Senator] Joseph McCarthy for the enemies list he had – ‘At long last…have you no shame?’”

As a fellow Rhode Islander, deeply appreciative of Mr. Woods’ blunt, accurate criticisms of the Neo-Marxist Left, I nevertheless feel compelled to rectify his egregious summary misrepresentation of the June 9, 1954 Welch-McCarthy confrontation, during the so-called “Army-McCarthy Hearings.” Welch’s cynically manufactured histrionics included breaking into tears, shortly after his dishonest and contrived, if “iconic” utterance (misquoted by Woods), “Have you left no sense of decency sir, at long last? Have you left no sense of decency?” The heated exchanges between Welch and McCarthy were based on the so-called “outing” of Welch’s initial co-counsel Frederick G. Fisher. Welch’s invective had nothing to do with an “enemies list,” as Woods errantly declared.

Here is a sourced chronology of events for the edification of Mr. Woods, and many other well-intentioned conservatives (even historian Victor Davis Hanson), who sadly reiterate the Left’s mendaciously pruned “accepted” narrative:

“We have been studying evidence that the National Lawyers Guild be included in the list of subversive organizations…I am now prepared to make this determination public. It has been clear that at least since 1946 the leadership of’ the Guild has been in the hands of card-carrying Communists and prominent fellow travelers. On every major issue since then it has steadfastly followed the Party line and its programs and actions have been consistent with it, excepting only those issues so notorious that their espousal would too clearly demonstrate the Communist control. It has become more and more the legal mouthpiece for the Communist Party and its members, and it has consistently opposed all laws or investigations which have sought to curb or expose Communist activity in the ‘United States. It is because the evidence shows that the National Lawyers Guild is at present a Communist dominated and controlled organization fully committed to the Communist Party line that I have today served notice to it to show cause why it should not be designated on the Attorney General’s list of subversive organizations.”

—On April 16, 1954, the New York Times published a story (see image below) that described U.S. Army counsel Joseph Welch’s outing of Frederick G. Fisher as a member of the “Communist dominated” National Lawyer’s Guild, and Welch’s relieving Fisher of duty as his assistant counsel. The story also featured a large photograph of Fisher. 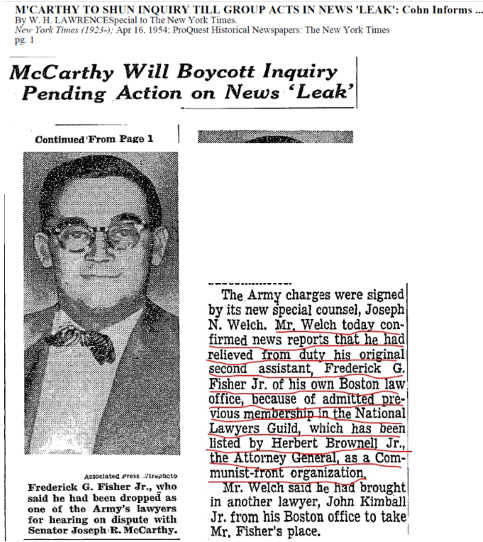 —Hypocritically ignoring his own outing (and relieving) of Fisher some 6-weeks earlier, as reported in the New York Times, Welch, on June 9, 1954, disingenuously excoriated McCarthy for in fact reiterating Welch’s earlier revelation of Fisher’s “admitted previous membership in the (Communist dominated) National Lawyers Guild.”

M. Stanton Evans, late nonpareil journalist, and historical researcher, wrote the definitive, meticulously sourced objective biography of Senator Joseph R. McCarthy, a 663 pp. magnum opus, entitled “Blacklisted By History: The Untold Story of Senator Joe McCarthy.” Evans’ chapter 42 from this work, “On Not Having Any Decency,” is the most comprehensively researched and referenced analysis of the 6/9/1954 Welch-McCarthy clash over Frederick Fisher.

“Joe Welch, thanks to these hearings, would take his place as one of more memorable characters of the era, a Dickensian figure transplanted to the 1950s. From a study of his forensic methods, strange way of phrasing things, and self-conscious quaintness, it’s obvious he was a consummate actor and that he approached the hearings in this spirit. Welch treated the whole affair as a kind of melodrama in which fact and reason were distinctly secondary to image and impression. Much of what he said and did was geared to this soap opera conception of the process.”

In a footnote, Evans provides these further observations on Welch’s thespian talents:

“Welch liked it to be known that he worked at a stand-up desk in the Victorian manner. As to his methods of expression, the following is a fairly typical passage: ‘Hearings on Saturday are…repulsive because the chair knows my lovely habit of going back to my home…I am just as opposed as the dickens to night sessions. But I have said before mine is a small voice. If I have to do it, I will hitch up my suspenders one more notch, etc.’ Welch later used his acting skills to more constructive purpose, playing a judge in the Jimmy Stewart movie, Anatomy of a Murder.” (see image from the 1959 move, below) 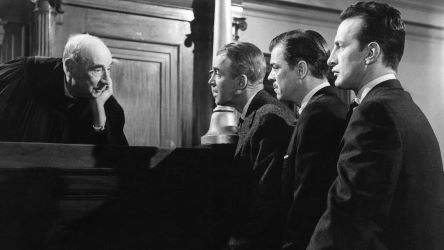 Welch had to apply those “thespian talents” because the hard evidence (including the chronology, elucidated earlier) implicated both his Army clients, and himself. Evans summarizes this material, while riveting on Welch’s blatant hypocrisy. Following Welch’s “decency” retort to McCarthy,

“Subsequently, we’re told, Welch broke into tears and the audience in the Senate chamber responded with sustained applause. Thus the incident most remembered from the hearings, and generally viewed as the moral Waterloo of Joe McCarthy. The reckless evildoer had exposed young Fred Fisher and his former membership in the National Lawyer’s Guild, thus scarring the innocent forever, and the good, decent Welch had protested this shameful outing of a youthful indiscretion. All of which seems very moving, and is invariably so treated. It looks a little different, however when we note that, well before this dramatic moment, Fred Fisher had already been outed, in conclusive fashion, as a former member of the National Lawyers Guild—by none other than Joe Welch. This had occurred in April, some six weeks before the McCarthy-Welch exchange, when Welch took it upon himself to confirm before the world that Fisher had indeed been a member of the Guild, and for this reason had been sent back to Boston..[A]s the New York Times reported (on 4/16/1954)…”.

Independent validation of McCarthy’s fundamental security concerns about espionage at Fort Monmouth, New Jersey, and the success of Welch’s deliberately distracting atmospherics at the hearings, can be found in Barry Goldwater’s 1979, With No Apologies: The Personal and Political Memoirs of United States Senator Barry M. Goldwater. The longstanding Arizona Senator’s memoir (p.61) includes this telling disclosure made by a Democratic Senatorial colleague shortly after the tumult of the Army-McCarthy Hearings receded.

“No one seemed to notice that after the furor faded the Army’s top secret operations at Fort Monmouth, New Jersey, which had been the subject of one of McCarthy’s attacks, were quietly moved to Fort Huachuca, Arizona. Carl Hayden, who in January 1955 became chairman of the powerful Appropriations Committee of the United States Senate, told me privately Monmouth had been moved because he and other members of the majority Democratic party were convinced security at Monmouth had been penetrated. They didn’t want to admit McCarthy had been right in his accusations. Their only alternative was to move the installation from New Jersey to a new location in Arizona.”

Ex-Communist Party USA (CPUSA)  member, and former editor of the CPUSA mouthpiece Daily Worker, Louis Budenz, elaborated in a 1954 oped (“Moscow Orders McCarthy Destroyed, Dupes Many Into Frenzy Against ‘McCarthyism’,” Delaware County Daily Times, November 5, 1954, p. 26), how the Communist movement not only generated, but then via its “transmission belt,” spread the anti-McCarthy smear campaign into mainstream media and political circles, for the ultimate purpose of squelching all investigation of Communist subversive activities.

At a special meeting of the Red national committee in March,1950, Communist leader Gus Hall ordered McCarthy’s political liquidation…During the three years from 1950 to 1953 I pored over hundreds of copies of the Daily Worker which fanned the official flames of the assault on McCarthy. From my experiences in the conspiracy, I realized in 1950 that the Reds’ organized hysteria against McCarthy and McCarthyism would soon pass easily into non-Communist opinion-forming organs. In a comparatively short time after Gus Hall’s order, what the Communists ordered to be said about McCarthy was being repeated by outstanding public figures, certain leading newspapers, and television and radio commentators…Moscow officially threw fuel on the flames. In October 1952, Joseph Stalin gave an important directive to his agents in non-Communist countries. He called upon the Communists of the “bourgeois” nations to raise higher the banner of “bourgeois civil liberties.” This call was dutifully published here in Political Affairs, the official Communist theoretical organ, and hailed  as a “momentous” declaration.

Notwithstanding the obvious “arrogance and insincerity” of this late 1952 personal directive from Stalin, Budenz further chronicled its contemporary (early to mid-1950s) sinister impact, which has lingered on through the present era.

Most unfortunately, very few Americans bothered to examine it [Stalin’s directive] at all, and this was true of most of our national leaders. The effect of this call was even greater frenzy against “McCarthyism” in the Communist press, and consequently among the friends and puppets of the Communists. They all followed the order to attack McCarthy in the name of “civil liberties.” By June 1953, Political Affairs [a CPUSA “internal organ” monthly publication] could feature an article of directives for Stalinites here entitled, “The Anatomy of McCarthyism.” The official Red line pictured McCarthy as “an unscrupulous demagogue and adventurer.” The comrades were instructed in this article that the attack on “McCarthyism” was not for the purpose of destroying the Wisconsin senator alone, but for killing off all Congressional investigations and every other effort to curb the Communist conspiracy. The article directed that “the main fire in the struggle for democratic liberties be directed against McCarthyism.” By June 1953 the Daily Worker could also feature an editorial entitled, “Our Crusade Hits Home.” In this editorial the Red organ proudly announced that it was the “initiator” of the campaign against “McCarthyism.” The editorial called a long roll of those who had followed the Communist lead, including some “conservative organizations.”

Consistent with Budenz’ 1954 observations, James Woods’ uninformed remarks epitomize how for 68 years many conservatives have either silently capitulated to, or worse still, regurgitated, the fellow-traveling Left’s mendacious narrative on the June 9, 1954 Welch-McCarthy confrontation during the Army-McCarthy Hearings. It is a soul-rotting exercise in denial of truth that abets a very sinister agenda even when clumsily “applied” by conservatives to the contemporary Left, and modern Communist fellow travelers.