“[I]t is reassuring that even in the wild strains that dominated the first year of the pandemic, the IFR in non-elderly individuals was much lower than previously thought…The median
IFR was 0.0003% [i.e., 1/333,333] at 0-19 years”

“Among people dying from COVID-19, the largest burden is carried by the elderly, and persons living in nursing homes are particularly vulnerable (2). However, non-elderly people represent the vast majority of the global population, with 94% of the global population being younger than 70 years old, 91% being younger than 65 years old, and 86% being younger than 60 years old. It is therefore important to get accurate estimates of the infection fatality rate (IFR) of COVID-19 among non-elderly people, i.e., the proportion of deceased among those infected, and to assess the age-stratification of IFR among non-elderly strata. Such assessments carry profound implications in public health, from evaluating the pertinence of prevention measures to vaccine strategies”

“By February 8, 2022, Serotracker had 2930 seroprevalence studies, of which 547 entries were described as “national”. Of those, 420 had their sampling end date before February 28, 2021. 183 were characterized as “household and community samples” or “multiple populations”. Of those, 107 were of low, moderate or unclear risk of bias. We screened in-depth the 107 entries and 73 were excluded. Therefore, 34 studies were eligible from this source. Our search on PubMed yielded 474 items, of which four additional eligible studies were identified. On May 25, 2022, we updated the search and found 2 additional studies to be included. In total, data from 40 studies which covered national seroprevalence estimates for 38 different countries were extracted and analyzed.” 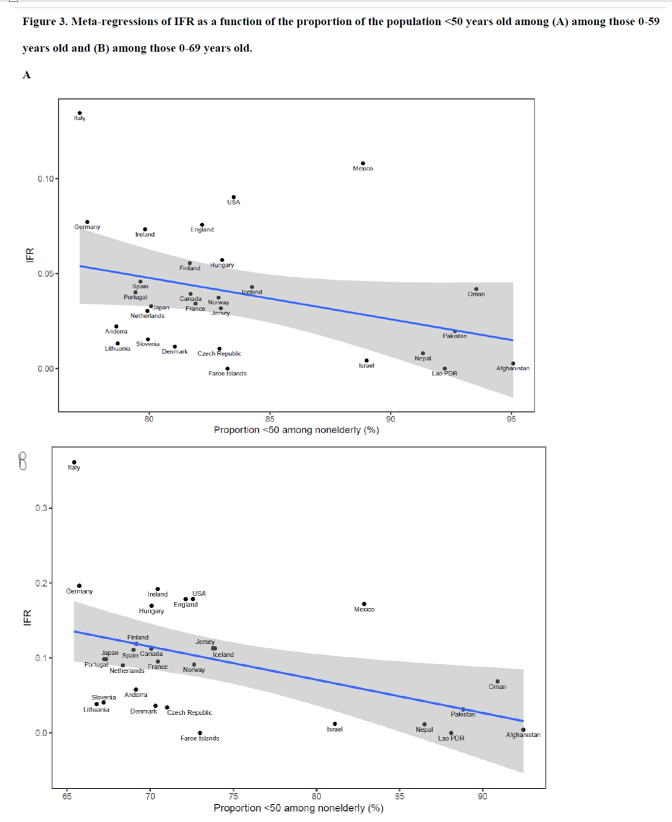 “The current comprehensive systematic evaluation of national seroprevalence studies suggests that the IFR of COVID-19 among non-elderly populations in the pre-vaccination era is substantially lower than previously calculated (4-8,59), especially in the younger age strata. Median IFRs show a clear age-gradient with approximately 3-4-fold increase for each decade but it starts from as low as 0.0003% among children and adolescents and it reaches 0.5% in the 60-69 years old age group. Sensitivity analyses considering all 38 countries with seroprevalence data that were identified in our systematic search showed that median IFR might be up to a third lower than the estimates produced by our main analysis, e.g. approximately 0.03% in the 0-59 years age group and 0.06-0.08% in the 0-69 years old group. Consistent with these estimates, meta-regressions suggest IFR estimates in that range for the global population where 87% of the 0-59 years old people are <50 years old and 80% of the 0-69 years old people are <50 years old… Consistent with the very low IFR estimates in non-elderly that we have obtained in this work, excess death calculations show no excess deaths among children and adolescents during the pandemic in almost any country that has highly reliable death registration data… This picture is very consistent with the overall very low IFR in the non-elderly…. Finally, the data that we analyzed pertain to the pre-vaccination period. During 2021 and 2022, the use of vaccination and the advent of new variants plus pre-existing immunity from prior infections resulted in a marked decline in the IFR… Other population studies, e.g. in Vojvodina, Serbia, suggest that fatality rates may be ten times lower in re-infections versus primary infections (see: Medić S, Anastassopoulou C, Lozanov-Crvenković Z, Vuković V, Dragnić N, Petrović V, Ristić M, Pustahija T, Gojković Z, Tsakris A, Ioannidis JPA. Risk and severity of SARS-CoV-2 reinfections during 2020-2022 in Vojvodina, Serbia: A population-level observational study. Lancet Reg Health Eur. 2022 Sep;20:100453.). The relative contributions of vaccination, prior infection and new variants in the IFR decline needs careful study and continued monitoring. However, it is reassuring that even in the wild strains that dominated the first year of the pandemic, the IFR in non-elderly individuals was much lower than previously thought.”