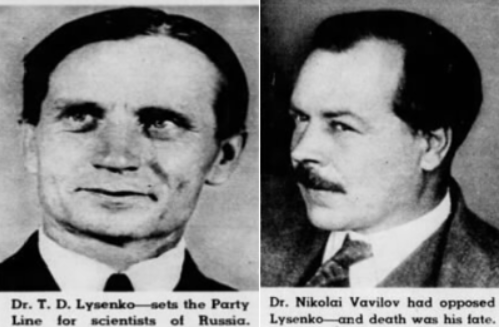 “Professor T.D. Lysenko, vice chairman of The Academy of Sciences of the Soviet Union, and holder of the Order of Lenin, is far ahead of any scientist in the field of genetics. He is, in fact, the only scientist who ever grew wax tomatoes from an ordinary vine...This unusual product was revealed at the Moscow Scientific Congress…One report says that Lysenko’s tomatoes were right on the vine. In any case, some scientist managed to stick one in his pocket and give it further examination. The tomato was made of wax. But Dr. Lysenko is no joke to Soviet scientists. One leading Russian scientist who happened to dispute his views, Professor Nikolai Vavilov, died in a concentration camp 6-years ago under circumstances that were never explained. Obviously other scientists unwilling to share the fate of Vavilov agree with Lysenko.” Hugh E. Wells. “How Soviet Shackles Its Scientists” The Philadelphia Inquirer September 26, 1948; p. 152