9/11 Should Remind Americans of the Shared Totalitarian “Religious Visions” of Islam and Its 20th Century Spawn, Communism

Posted on 11th September 2022 | Comments Off on 9/11 Should Remind Americans of the Shared Totalitarian “Religious Visions” of Islam and Its 20th Century Spawn, Communism 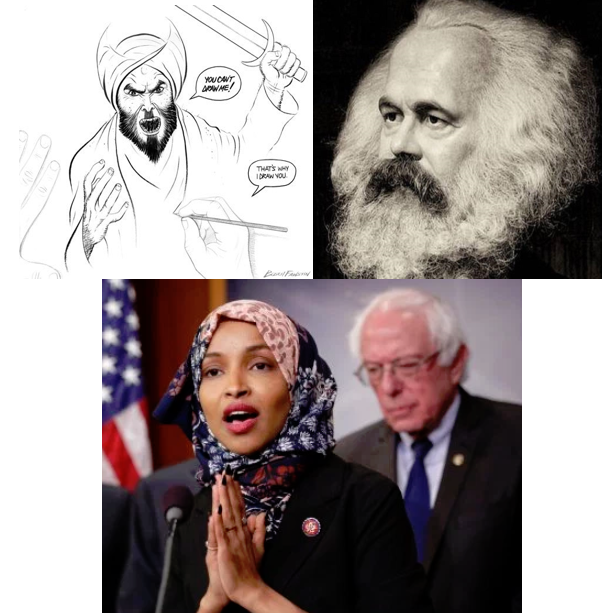 “[M]any of the Protestant churches in Germany are no more than empty shells. This lack of horizon, spiritually speaking, has led to the growth of socialism to a marked degree in Germany. Karl Marx was its founder and its slogan is ‘There is no God, and Karl Marx is his prophet.’”

Even earlier, five years before the October, 1917 Bolshevik Revolution would begin to impose Communist totalitarianism on Russia, Henry C. Vedder, observed in his 1912 study of Socialism, that the Marxist Social Labor Federation of Britain had adopted Karl Marx’s “Das Kapital” [Capital] as their infallible authority, “an article of faith from which they will permit no dissent, on pain of excommunication.”  Vedder, a Professor of Church History at the Upland, Pennsylvania Crozer Theological Seminary, added that this British Marxist organization rejected the orthodoxy of its own votaries unless they too professed as their credo, “There is no God, and Karl Marx is his prophet.”— mirroring the Islamic declaration of faith (p.730), or “shahada”—“There is no God but Allah, and Muhammad is his prophet.”

Late doyen of Islamic studies, Bernard Lewis, had erroneously attributed the origins of this Communist profession of faith to an unnamed mid-20th century “humorist” in his 1954 essay, “Communism and Islam”. Despite that rather egregious error—attributing the established, obligatory creed of humorless Marxists, some four decades after the fact, to a witty quip by some anonymous comic—Lewis did keenly point out how this statement highlighted “real affinity” between Islamic and Communist totalitarianism, a theme his essay developed quite well, and at some length.

French sociologist and ex-Communist Jules Monnerot, in 1949, five years prior to the publication of Lewis’s essay, published a brilliant historical and doctrinal analysis elaborating the intimate connections between the Muslim creed, and modern Communism. Indeed the title of Monnerot’s first chapter dubbed Communism as “The Twentieth-Century Islam.” Monnerot elucidated these two primary shared characteristics of Islam and Communism: “conversion”—followed by subversion—from within, and the fusion of “religion” and state. He argued, “Communism takes the field both as a secular religion and as a universal State; it is therefore . . . comparable to Islam…,” while each also “…work[s] outside the[ir] imperial frontiers to undermine the social structure of neighboring States.”

The late Islamologist Maxime Rodinson warned in 1974 of a broad academic campaign—which has clearly warped the judgment of policymakers across the politico-ideological spectrum—“to sanctify Islam and the contemporary ideologies of the Muslim world.” A pervasive phenomenon, Rodinson ruefully described the profundity of its deleterious consequences:

“Understanding [of Islam] has given way to apologetics pure and simple.”

An ex-Communist himself, Maxime Rodinson (d. 2004), reaffirmed the essential validity of Monnerot’s 1949 comparison between Islam and Communism. During a September 28, 2001, interview with Le Figaro, Rodinson acknowledged that while still a Communist, he had taken umbrage with Monnerot’s assessment. But having long since renounced the Communist Party, Rodinson (circa September, 2001) conceded that there were “striking similarities” between Communism and Islam, noting that like Communism, traditional Islam promulgated “an ideology that claims to explain everything, drawing on a vision of the world that is fiercely paranoid [and] conspiratorial.”