Posted on 15th August 2022 | Comments Off on Twitter, Ayatollah Khamenei, and Me

Author Salman Rushdie is recovering from a crippling, near lethal knifing attack during a speaking engagement at The Chautauqua Institute this past Friday, August 12, 2022. The alleged “motivation” for Rushdie’s jihadist attacker, Hadi Mattar, was alluded to, in part, by ABC News, thusly:

“On the suspect’s phone, investigators say they found photos of Iranian Maj. Gen. Qasem Soleimani, who was killed in a U.S. drone strike, and Abu Mahdi al-Muhandis, the leader of Iraq’s pro-Iranian militia movement, also killed by U.S. forces. Police recovered a fake New Jersey driver’s license, which appears to have used the suspect’s picture with the alias ‘Hassan Mughniyah,’ a possible reference to Hassan Nasrallah, the leader of Lebanese terror organization Hezbollah, and Imad Mughniyeh, who was the group’s No. 2 official before being killed in 2008, sources said.”

Willfully ignored in the mainstream media narrative is the direct nexus between Hadi Mattar’s attack and traditionalist Islamic “blasphemy” law, both Sunni and Shiite alike (summarized here), as articulated most germanely in a 1989 fatwa (Islamic legal ruling) targeting Rushdie, by Ayatollah Khomeini:

“I am informing all brave Muslims of the world that the author of The Satanic Verses, a text written, edited, and published against Islam, the Prophet of Islam, and the Qur’an, along with all the editors and publishers aware of its contents, are condemned to death. I call on all valiant Muslims wherever they may be in the world to kill them without delay, so that no one will dare insult the sacred beliefs of Muslims henceforth. And whoever is killed in this cause will be a martyr, Allah willing. Meanwhile, if someone has access to the author of the book [The Satanic Verses] but is incapable of carrying out the execution, he should inform the people so that [Rushdie] is punished for his actions.”

Muhammad Hashim Kamali, who, between 1985 and 2004, taught Sharia and jurisprudence, as a professor of law at the International Islamic University of Malaysia, has been deemed, “the most widely read living author on Islamic law in the English language.” In his authoritative Freedom of Expression in Islam, Kamali observed “…no serious Muslim commentator has challenged the basic validity of the Ayatollah’s fatwa. Adjudication was generally viewed to be necessary if only to find out if Rushdie was willing to repent.” The 1989 Khomeini fatwa wrought targeted murders in Europe and Japan, and a mass killing in Turkey.

Khomeini’s successor as Iran’s “Supreme Leader” and “Spiritual Guide”, Ayatollah Khamenei, validated Professor Kamali’s observation in both a 2017 fatwa, and 2019 tweet, proclaiming, “Imam Khomeini’s verdict regarding Salman Rushdie is based on divine verses, and just like divine verses, it is solid and irrevocable.”

Openly expressed Tehran “Muslim man on the street” sentiments in the immediate aftermath of Rushdie’s stabbing demonstrate how Khomeini’s and Khamenei’s rulings are still embraced:

“‘I don’t know Salman Rushdie, but I am happy to hear that he was attacked since he insulted Islam,’ said Reza Amiri, a 27-year-old deliveryman. ‘This is the fate for anybody who insults sanctities.’

On Saturday, Mohammad Mahdi Movaghar, a 34-year-old Tehran resident, described having a “good feeling” after seeing Rushdie attacked. ‘This is pleasing and shows those who insult the sacred things of we Muslims, in addition to punishment in the hereafter, will get punished in this world too at the hands of people,’ he said.”

Ayatollah Khamenei’s twitter account was frozen, briefly, in 2019, when twitter removed the tweet sanctioning Rushdie’s murder for “apostasy/blasphemy.” Quickly restored, the account remains operational to spew annihilationist invective against the Jews of Israel, including dehumanizing portrayals of Jews as “unclean (najis)”, the odious Shiite Islamic doctrine that condemns Jews in perpetuity as physically and spiritually impure. (See tweets below from 2014, never removed, and still “live.”) Historically, the dehumanizing character of these popularized najis regulations fomented recurring Shiite Muslim violence against Iranian Jews, including pogroms and forced conversions throughout the 17th, 18th, 19th, and early 20th centuries. Such Jew-annihilationist Khamenei tweets, across a recent continuum from 2013, till now, have never been deemed verboten by twitter. 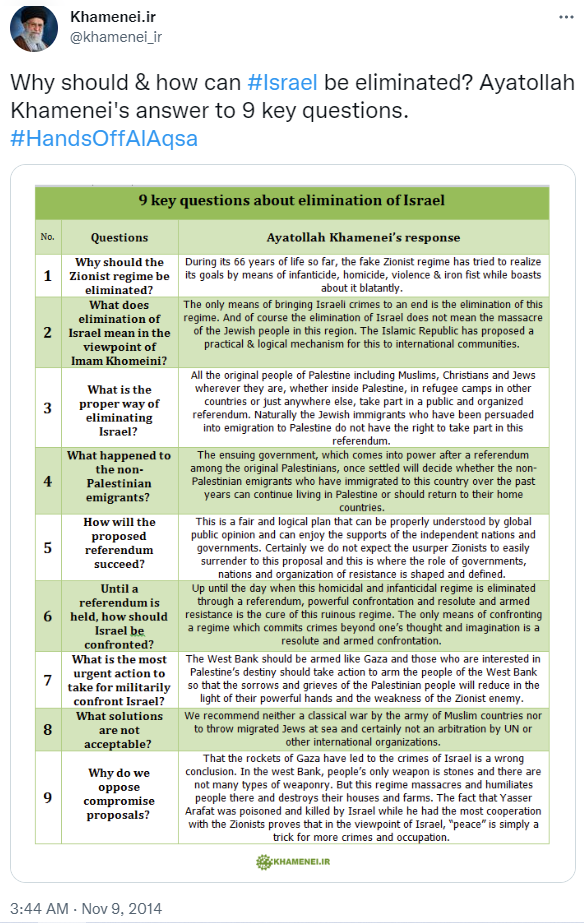 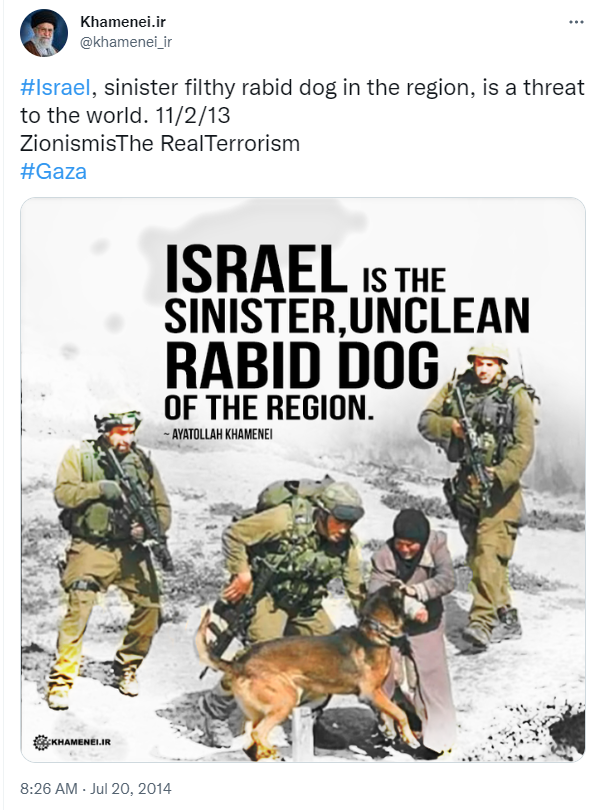 My twitter account’s fate, vis-à-vis twitter’s “arbiters of standards,” stands in stark contrast. For simply tweeting factual information about covid-19 mRNA vaccines (i.e., observational and randomized controlled trial data), my twitter account has twice been suspended. The initial suspension was briefly lifted when twitter admitted its error. Following the second “breach,” my account remains permanently suspended, apparently pending full-fledged, class action litigation. These links make my scientific (here; here) and legal cases (here; here) in some detail. But journalist and author Alex Berenson tweeted the material I sent him on the Khomeini and Khamenei fatwas in this masterful juxtaposition of offending tweets which capture the moral (and scientific) absurdity of my twitter suspension: 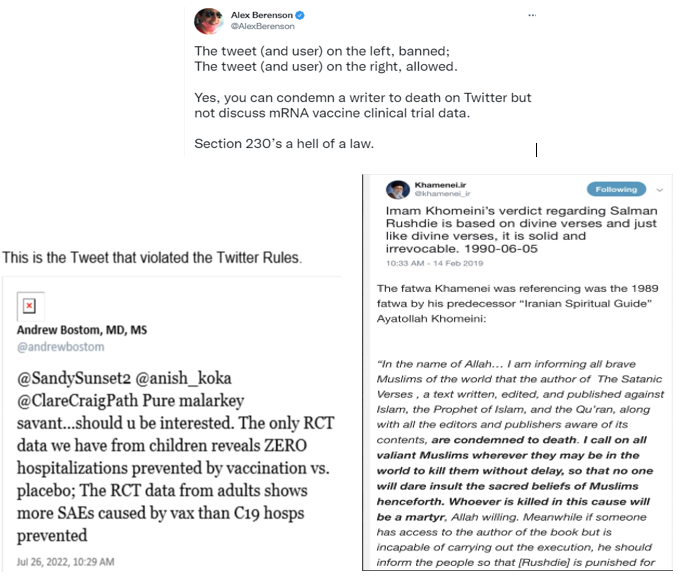