“Professor T.D. Lysenko, vice chairman of The Academy of Sciences of the Soviet Union, and holder of the Order of Lenin, is far ahead of any scientist in the field of genetics. He is, in fact, the only scientist who ever grew wax tomatoes from an ordinary vine...This unusual product was revealed at the Moscow Scientific Congress…One report says that Lysenko’s tomatoes were right on the vine. In any case, some scientist managed to stick one in his pocket and give it further examination. The tomato was made of wax. But Dr. Lysenko is no joke to Soviet scientists. One leading Russian scientist who happened to dispute his views, Professor Nikolai Vavilov, died in a concentration camp 6-years ago under circumstances that were never explained. Obviously other scientists unwilling to share the fate of Vavilov agree with Lysenko.” 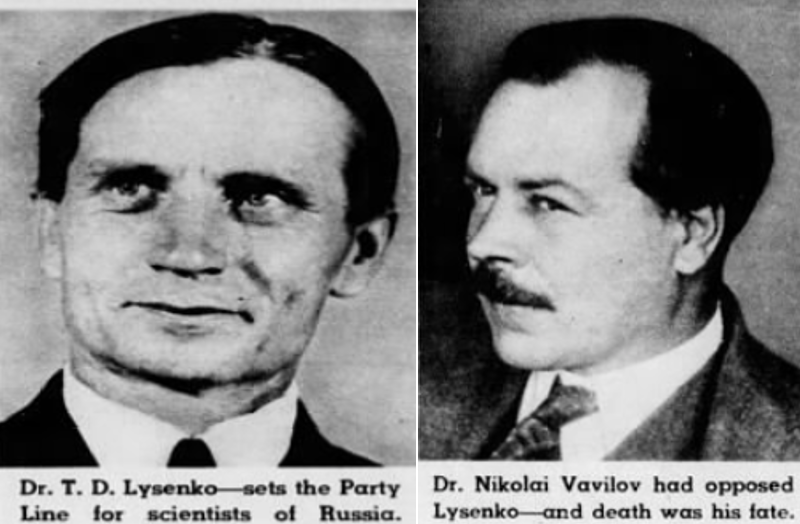 “If you look at the extraordinary success in…eliminating polio for most of the world—and we’re on the brink of eradicating polio—if we had had the pushback for vaccines the way we’re seeing on certain media, I don’t think it would’ve been possible at all… we probably would still have polio in this country if we had the kind of false information that’s being spread now (about, allegedly, covid-19 vaccines).”

“If today’s misinformation, politicization and anti-vaccine sentiment existed in the United States in the 1950s, would the polio vaccine have received the same level of uptake? Would we have heard the same argument that most kids are not at risk? That a vast majority are asymptomatic? Or that only a tiny minority dies? This history may help parents make the decision about vaccinating their children against covid-19….Children are less vulnerable to covid-19 than adults, but to some extent, that was also true for polio.”

Hard data on childhood polio versus covid-19 disease severity, and direct juxtaposition of the polio and covid-19 vaccine trials, reveals a very different reality than portrayed by these medical savants. Indeed, their recklessly inaccurate comparisons expose the fulminations of Drs. Fauci and Jha as unhinged, Lysenkoist tomato hurling at those leery of mass, indiscriminate childhood covid-19 vaccination campaigns, both their dissenting medical peers, and the lay public.

Vought and Greenberg’s 1957 JAMA publication analyzed polio mortality between 1915 and 1954 in U.S. children aged up to 14 years old, prior to mass polio vaccination efforts. Despite a steady decline over these four decades, due to the expanding development of natural immunity, the average polio death rate among these children, including the major outbreaks, was an alarming 5.7%.

These data stand in stark contrast to the near zero childhood covid-19 mortality, overall, and perhaps literally zero, among children free of chronic comorbidity. Even the American Academy of Pediatrics, concedes, based upon its recording system, “In states reporting, 0.00%-0.03% of all child COVID-19 cases resulted in death.” An elegant study from a national database in Germany reported concordant findings, noting,

“The lowest risk was observed in children aged 5-11 without comorbidities. In this group, the ICU admission rate was 0.2 per 10,000 (2 per 100,000) and case fatality could not be calculated, due to an absence of cases”

–Among kids who died of COVID-19, 38% were already on palliative/ hospice care.

516 total cases of paralytic polio accumulated in the 1954 polio field trial, and vaccination reduced its incidence by 71.1% and 62.4%, relative to the placebo and observational-control groups, respectively. The Pfizer covid-19 vaccine randomized, placebo-controlled trial in 5 to 11 year-olds recorded zero cases of severe covid-19, despite recruiting ~20% with comorbidities. Covid-19 vaccination did reduce mildly symptomatic, covid-19 sniffles syndrome by “90.7%,” based on “3 cases in the BNT162b2 group and 16 cases in the placebo group (noting the 2:1 randomization of vaccine: placebo)”. Additionally, “No cases of COVID-19 were observed in either the vaccine group or the placebo group in participants with evidence of prior SARS-CoV-2 infection.”

the evidence for long COVID in children and adolescents is limited, and all studies to date have substantial limitations or do not show a difference between children who had been infected by SARS-CoV-2 and those who were not. The absence of a control group in the majority of studies makes it difficult to separate symptoms attributable to long COVID from pandemic-associated symptoms”