Friday afternoon, March 5, 2021 I tweeted the following accompanied by the figures below. Both figures are from the Rhode Island Department of Health Covid-19 Data Tracker hub, although the “modeling” figure is no longer available. Fortunately, the modeling figure from March/April 2020 was preserved for posterity in journalist Ed Achorn’s incisive oped, published in the Providence Journal, April 30, 2020, with the res ipsa loquitur title, “Modeling was grossly inaccurate”. Achorn’s oped is reproduced in full after the figures, for clarification—and preservation—in case it too is expunged.

@GovDanMcKee: “Reminder, as you consider when to fully reopen & unmask us, that the Bob Uecker-inspired Brown U/RIDOH ‘modeling savants’ predicted peak 1st wave C19 hospitalization census would be between 2250 & 4300. They were ‘just a bit outside’ the actual 375 on 4/28.” 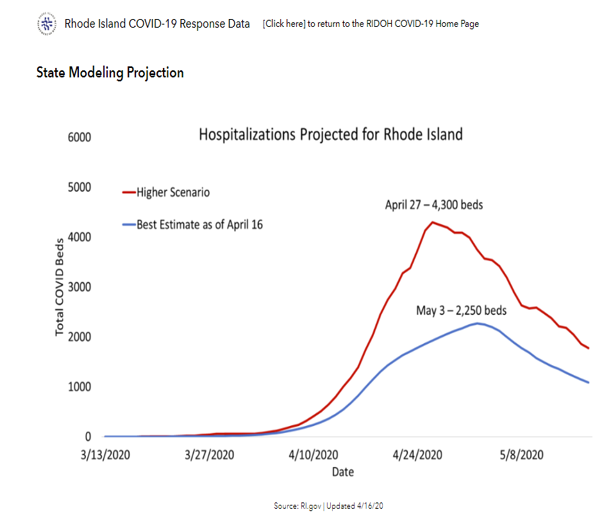 Something very strange has been going on with COVID-19 models that precipitated Rhode Island’s drastic response. Models still posted Thursday on the Rhode Island Department of Health’s website showed that the peak need for hospital beds for COVID-19 patients will occur this Sunday, May 3, with 2,250 beds needed.

In truth, there were evidently 339 people hospitalized yesterday, though the state seems to be having trouble accurately counting the number.

That is an enormous magnitude of error. Yet no one has apologized, and Rhode Island has been so lethargic in correcting the error that the clearly faulty model was still up Thursday morning. Obviously, we will not have a run on hospital beds by May 3. According to the state Wednesday, daily new hospital admissions for COVID-19 in Rhode Island had plummeted from a high of 36 on April 16 to two on April 28.

And some of the terrifying projections in April were even wilder. The modelers warned that 4,300 people could need hospital beds in Rhode Island on April 27. That was almost 13 times greater than the actual number proved to be. Gov. Gina Raimondo even said the number could reach a horrifying 6,000.

As we have noted, no one could have been certain a month ago how the virus would impact Rhode Island’s hospitals and mitigation was called for. But the fast-and-loose nature of the models was clear on April 16, when the more conservative (though still inflated) estimate of 2,250 beds was rolled out.

The modelers did not even bother to make their new chart reflect reality. It over-inflated the number of hospital beds needed in Rhode Island on April 16 by about three times. You would think the modelers would at least begin their revised chart with an accurate number. It would be one thing if these models had no public policy implications. But they formed the entire basis of the state’s shutdown, which has left Rhode Island’s economy in smoldering ruins. The idea was to “flatten the curve” of infections so that hospitals would not be overrun with patients. The actions taken by Rhode Islanders, in practicing social distancing, must have been helpful in stemming the spread of this scary virus. But the frightening models are so out of whack that it seems unlikely mitigation efforts alone made the difference.

All of this modeling has been rather cloaked in obscurity. Legislative leaders this week had no idea who did the modeling and how much it cost. Jennifer Bogdan, the governor’s press secretary, revealed in an email: “the model was developed collaboratively with the R.I. Department of Health, Brown University and the Brown University Policy Lab based on a framework from Johns Hopkins University.” “There are no costs associated with the model,” she added. The state certainly got its money’s worth.

Though it is important to “trust the science,” it is always a good idea to insist on full transparency when dealing with government. In the months ahead, as Rhode Island picks up the pieces, we hope the media and the legislature will look into how these models were created and whether we could have done better.