How ADL Negates The Pandemic Of Muslim Antisemitism (And Its Own Findings!) [With Video]

Posted on 3rd November 2019 | Comments Off on How ADL Negates The Pandemic Of Muslim Antisemitism (And Its Own Findings!) [With Video]

Absent significant cognitive dissonance, anyone keeping abreast of the ongoing global jihad carnage—from Afghanistan to India to Yemen—even Germany—would not be surprised that “white supremacist” killings remain a marginal epiphenomenon. Just in the past 30 calendar days through November 2, 2019, there were (at least) 72 Islamic jihadist attacks (tabulated here)  in 19 countries, during which 352 persons were killed, and 304 injured.

Perusing, or drilling down on the most recent U.S. Department of State (USDOS) “Country Reports on Terrorism 2018” (just published November 1, 2019), confirms, again, this irrefragable truth, as summarized by City Journal’s Seth Barron, when he reviewed the 2017 report:

…[A]lmost all the world’s extremist violence is concentrated in a handful of regions, where very few white people live

Methodical key word searches of the (11/1/19-released) 2018 USDOS 332pp. report reveal, tellingly, the following references: 83 for “jihad-jihadist”; 14 for “Communist”, with another 8 for “Marxist”, including the Basque ETA, often dubbed “Nationalist”; 4 for “Nationalist” itself, but this includes only the (1) Marxist Palestinian PFLP, (2) the Kurdish Marxist-Maoist PKK, and Marxist Turkey-based Revolutionary People’s Liberation Party/Front, (3) the jihadist spearheaded “ethno-nationalist insurgency” in southern Thailand, and (4) so-called “regional nationalist groups” in Bosnia Herzegovina—which also includes jihadists who attempted to “travel to foreign battlefields”; a solitary—one—”white supremacist” reference to Sweden, in this full context—”Sweden faces ‘a new normal,’ with an estimated 2,000 ‘Islamist extremists’ and 1,000 ‘white supremacist and leftist violent extremists’ present in the country.”

Consistent findings from a report entitled the “black and white book of terrorism in Europe” were reported during the spring of 2019. The initiative of a Spanish woman member of the European Union’s (EU) Parliament, Maité Pagazaurtundua, these EU data demonstrated that between 2000-2018, there were 633 deaths due to jihadist attacks, but only 14 deaths attributed to the “extreme right,” and these were matched by 12 deaths attributed to the “extreme left.” 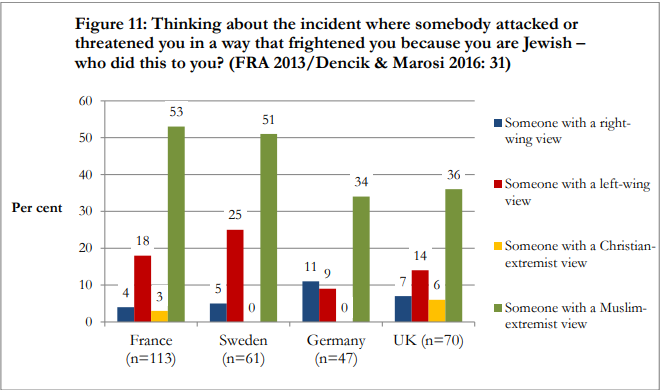 Blithely ignoring the worldwide context, which includes the intimate connection between jihadism, and Islamic Jew-hatred, the House Judiciary Committee held a hearing this past April entitled, “Hate Crimes and the Rise of White Nationalism.” Much to the chagrin of both the majority Democrats who organized the hearing, and one of their prime witnesses, Eileen Hershenov of the Anti-Defamation League (ADL), another witness, Zionist Organization of America President Morton Klein, refused to abide the proceeding’s willful blindness.

Mr. Klein emphasized the excess occurrence of hate crimes against Jews in America—a consistent phenomenon for over two decades based upon hard FBI data (1996–2017). Despite the Committee’s, and Ms. Hershenov’s, hand-wringing about “Islamophobia”—notwithstanding 53 jihadist attacks which have caused 158 deaths in the U.S., since the cataclysmic 9/11/2001 jihad carnage, and zero, remotely comparable depredations by Jews—hate crime rates targeting Jews, between 2015 and 2017, remained 2.2 to 3.1-fold higher, relative to the rates of hate crimes against Muslims.

Post-9/11 murderous Muslim violence targeting American Jews, specifically, includes four attacks which killed six, as tabulated here. During the past 11-month period, alone (since December, 14 2018), four potentially mass murderous attacks by Muslim jihadists on American Jews (here; here; here; here) by Muslim jihadists on American Jews have been thwarted by U.S. law enforcement, in Montana, Georgia, Ohio, and California. Three of these prevented attacks were reported before the April, 2019 House Judiciary Committee Hearing, including one, as journalist Daniel Greenfield observed, which involved a convert to Islam “inspired” by the Pittsburgh Tree of Life synagogue mass shooting.

The April testimony of ADL’s Hershenov, however, cynically exploited the gruesome 2018 Pittsburgh Tree of Life Synagogue carnage—11 Jews murdered in cold blood by an affirmed Neo-Nazi, and the subsequent early 2019 killing of a Jew at the San Diego area Pohway Chabad synagogue by a young white supremacist—to ignore any spontaneous, forthright discussion of Muslim violence against Jews, in either Western Europe, or America.

Mr. Klein’s evidence-based testimony, in stark contrast, exposed the moral perversity of focusing on “Islamophobia,” or worse still equating it with Antisemitism, when Jews are being subjected to a global pandemic of Muslim Jew-hatred, which includes the attitudes of U.S. Muslims. Adding insult to irony, Klein’s presentation featured, appositely, unique data compiled by the ADL itself!.

Between 2014 and 2017, the ADL conducted global and regional surveys which captured the prevalence of those who agreed with six or more of eleven Antisemitic stereotypes, i.e., an index of extreme Antisemitism. The results demonstrated a remarkable, if depressing uniformity: there is a 2 to 4.5-fold excess of Muslim Jew-hatred, relative to any other major religious affiliation, or atheism/agnosticism, and this association with Islam persists amongst the Muslim diaspora populations in Western Europe, and the U.S. Specific findings, included:

—The prevalence of extreme Antisemitism in the U.S., 34% of Muslims vs. 14% of the general population

Mort Klein further shattered an even more profound taboo: he made plain how Antisemitic themes from canonical Islam—the Koran, and the traditions of Islam’s prophet Muhammad (the “hadith”)—as preached in U.S. mosques, but most importantly, by Sunni Islam’s Vatican, Al-Azhar University, and its Grand Imam Papal equivalents, were responsible for inculcating these Jew-hating attitudes in the global Muslim masses. The late Grand Imam of Al-Azhar, Muhammad Sayyid Tantawi (d. 2010), was singled out by Klein—appropriately. Tantawi was one of the most revered modern authorities on Koranic exegesis, or “tafsir,” having edited a massive 15-volume modern Koranic commentary, and helped create the largest online website of such analyses. He also authored what can be aptly described as modern Islam’s Koranic Kampf on the Jews, entitled “Banū Isrāʼīl fī al-Qurʼān wa-al-Sunnah,” or “Jews in The Koran and The Traditions”. Tantawi’s authoritative  Kampf, a 700+ page Muslim academic religious treatise, includes this summary Koranic rationalization for Muslim Jew-hatred:

(The) Koran describes the Jews with their own particular degenerate characteristics, i.e. killing the prophets of Allah (see Koran 2:61/ 3:112 ], corrupting His words by putting them in the wrong places (4:46) , consuming the people’s wealth frivolously (4:161), refusal to distance themselves from the evil they do (3:120; 5:79), and other ugly characteristics  caused by their deep-rooted (lascivious) envy (2:109)…only a minority of the Jews keep their word…[A]ll Jews are not the same. The good ones become Muslims (Koran 3:113), the bad ones do not.

As Grand Imam of Al-Azhar, Tantawi’s public statements on “dialogue” (January 1998) with Jews, the Jews as “enemies of Allah, descendants of apes and pigs” (April 2002; from Koran 5:60), and the legitimacy of homicide bombing of Jews (April 2002)—issued after the Netanya Passover slaughter—made his personal Muslim Jew-hatred eminently clear. Tantawi’s comments on dialogue, which were issued shortly after he met with Israel’s Chief Rabbi, Israel Meir Lau, in Cairo, on December 15, 1997, re-affirmed his ongoing commitment to the views expressed in “Jews in The Koran and The Traditions”.

Tantawi’s successor, current Al-Azhar Grand Imam Ahmed al-Tayeb, shares Tantawi’s Jew-hating virulence. Al-Tayeb has dubbed the Jews eternal Koranic enemies (per Koran 5:82), blamed Jews for the rise of ISIS and other jihadist groups, and claims “the issue of Antisemitism is a lie.”

In “response” to Mort Klein’s presentation of ADL data such as those illustrating the 16 countries with the highest prevalence of extreme Antisemitism—all of them, Arab Muslim societies whose populations are 90-100% Muslims (with the exception of 60% Muslim majority, Lebanon)— ADL’s Eileen Hershenov, Senior VP for Policy, had the temerity to portray, the virulently Antisemitic Muslim denizens of these countries, as follows :

One of the witnesses (Klein) talked about global attitudes that we look at…and the ADL does track that…[V]ulnerable, marginalized communities have bigotry within them.