Posted on 9th February 2019 | Comments Off on Why Designating “Muhammad Ali Jinnah Way” in “New Pakistan”, Brooklyn, Is Just Another Capitulation To Totalitarian (& Kleptocratic) Islam 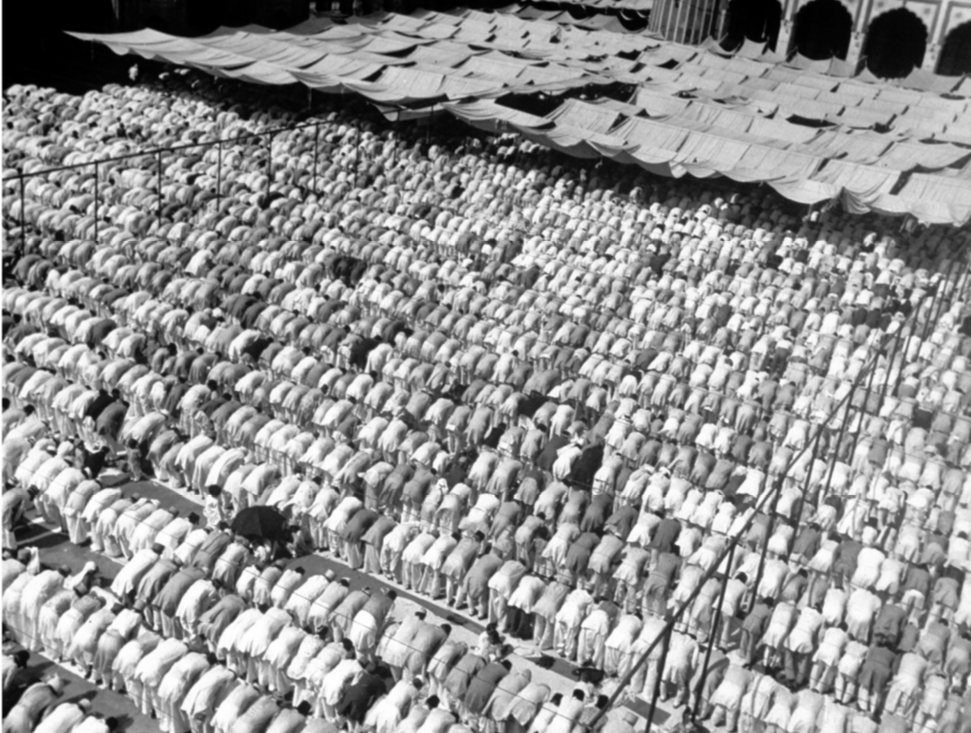 Margaret Bourke-White’s Life Magazine photograph of Indo-Pakistani Muslims praying, with her original caption: “Facing toward Mecca, Islam’s holy city, worshippers prostrate themselves in silent prayer to Allah. Most of the standing figures are women, who customarily do not pray in mosques since Moslems assign women to strictly inferior status.” In Bourke-White’s 1949, Halfway to Freedom: A Report on the New India, she reproduced this image, with the truncated caption, “Women may not pray with men, but are permitted to stand in the rear.”

Why?  To the point, Jinnah, founder of the Islamic State of Pakistan, was depicted without camouflage, by a sympathetic, but honest observer, LIFE Magazine correspondent & photographer, Margaret Bourke-White, from her 1949, Halfway to Freedom: A Report on the New India:

“What kind of constitution did he [Jinnah] intend to draw up? ‘Of course it will be a democratic constitution; Islam is a democratic religion.’ I ventured to suggest that the term ‘democracy’ was often loosely used these days [she met Jinnah in Sept., 1947]. Could he define what he had in mind? ‘Democracy is not just a new thing we are learning,’ said Jinnah. ‘It is in our blood. We have always had our system of zakat—our obligation to the poor.’ This confusion of democracy with charity troubled me. I begged him to be more specific. ‘Our Islamic ideas have been based on democracy and social justice since the thirteenth century.’ This mention of the thirteenth century troubled me still more. Pakistan has other relics of the Middle Ages besides ‘social justice’—the remnants of a feudal land system, for one. What would the new constitution do about that? The Koran, by which the transactions of Muslims have been regulated since the day of the Prophet, has been interpreted to indicate something close to totalitarianism…‘The land belongs to God,’ says the Koran. This would need clarification in the constitution. Presumably Jinnah, the lawyer, would be just the person to correlate the ‘true Islamic principles’ one heard so much about in Pakistan with the nation’s new laws. But all he would tell me was that the constitution would be democratic because ‘the soil is perfectly fertile for democracy.’ ”…

“He [Jinnah] was stressing America’s military interests in other parts of the world. ‘America is now awakened,’  he said with a satisfied smile. Since the United States was now bolstering up Greece and Turkey, she should be much more interested in pouring money and arms into Pakistan…This hope of tapping the U.S. Treasury was voiced so persistently that one wondered whether the purpose was to bolster the world against Bolshevism or to bolster Pakistan’s own uncertain position as a new political entity. Actually I think it was more nearly related to the even more significant bankruptcy of ideas in the new Muslim state—a nation drawing its spurious warmth from the embers of an antique religious fanaticism fanned into a new blaze.”