Posted on 25th November 2015 | Comments Off on The First Thanksgiving Per Governor Bradford’s 17th Century Annals: An Homage to Divine Grace 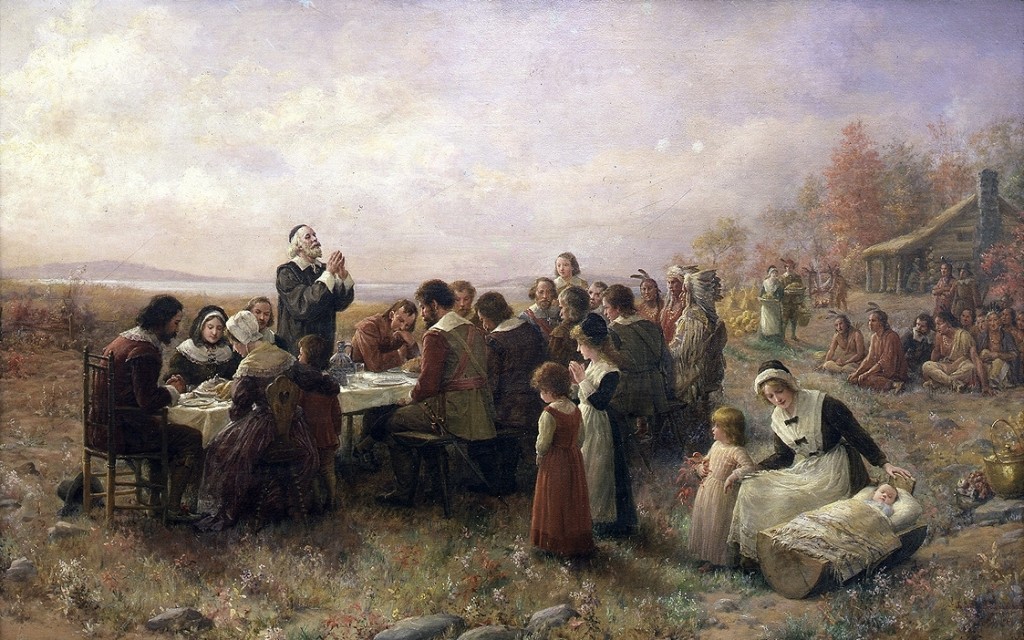 Governor Bradford’s annals of the Plymouth, Massachusetts Colony “Of Plymouth Plantation”, was an early history of the Colony from its inception, through 1647. This work has been in print since the mid-19th century, via the efforts of the Massachusetts Historical Society, which secured a transcript of the original document from London, and printed it in the society’s 1856 proceedings.

My colleague Dr. John Agresto, (who wrote a poignant, and sympathetic, yet brutally honest memoir of the 9-months [September 2003 to June 2004] he spent in Iraq working as then Ambassador Paul Bremer’s senior advisor to the Iraqi Ministry of Higher Education and Scientific Research), sent an email last evening noting “I’ve always thought it fine and appropriate to read each year, just before sitting down to (Thanksgiving) dinner,” the following extracts from Bradford’s annals.

The words below, Book II, pp. 170-171, provide an account of the events leading up to the first Thanksgiving, an homage to divine grace:

I may not here omit how, notwithstanding all their great pains and industry, and the great hopes of a large crop, the Lord seemed to blast and take away the same, and to threaten further and more sore famine unto them. For a great drought continued from the third week in May till about the middle of July, without any rain and with great heat, insomuch as the corn began to wither away though it was set with fish, the moisture whereof helped it much. Yet at length it began to languish sore, and some of the drier grounds were parched like withered hay, part whereof was never recovered. Upon which they set apart a solemn day of humiliation, to seek the Lord by humble and fervent prayer, in this great distress.

And He was pleased to give them a gracious and speedy answer, both to their own and the Indians’ admiration that lived amongst them. For all the morning, and the greatest part of the day, it was clear weather and very hot, and not a cloud or any sign of rain was to be seen. Yet toward evening it began to overcast, and shortly after to rain with such sweet and gentle showers as gave them cause of rejoicing and blessing God. It came without either wind or thunder or any violence, and by degrees in that abundance as that the earth was thoroughly wet and soaked and therewith. It did so revive and quicken the decayed corn and other fruits, as was wonderful to see, and made the Indians astonished to behold. And afterwards the Lord sent them such seasonable showers, with interchange of fair warm weather as, through His blessing, caused a fruitful and liberal harvest, to their no small comfort and rejoicing. For which mercy, in time convenient, they also set apart a day of thanksgiving.