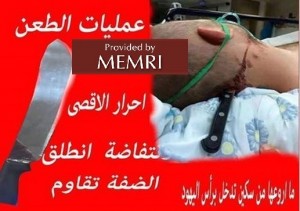 [Via MEMRI. A ghoulish picture, and equally ghoulish accompanying commentary, posted on Facebook, depicting the Israeli Jewish victim of one stabbing attack, while the knife was still protruding from the back of his neck, the caption declaring: “Stabbing operation. The free men of Al-Aqsa. The Intifada has started. The [West] Bank is carrying out resistance.There is nothing greater than a knife penetrating the heads of the Jews.”]

The ongoing wave of murderous, knife-wielding jihad terror attacks by Palestinian Muslims against Israeli Jews has been punctuated by two ghoulish, closely related phenomena of incitement: the launching of social media hashtags such as “Poison the Knife Before You Stab,” or “Slaughtering the Jews,” and the repetition by Palestinian Muslim clerics [here; here] of Islam’s canonical Jew-hating motifs, sanctioning a jihad genocide of Israeli Jews. Notwithstanding the shocking barbarity of such vox populi social media hashtags, the Muslim clerical imprimatur given to these wanton killings of Jews is far more insidious, and pathognomonic of a mainstream Islamic religio-political depravity willfully ignored by media, religious, and political leaders, worldwide.

Sheikh Muhammad Abu Sa’da, in a sermon delivered at the Abdallah Azzam Mosque, Gaza, (posted on the Internet on October 3, 2015), invoked a Koranic epithet for Jews(5:60) while calling for Palestinian Muslims to wage a genocidal jihad against “the brothers of apes and pigs (5:60),” and liquidate the Jewish State.

The Al-Aqsa Mosque is expecting our mujahideen [jihad warriors] and martyrdom-seekers. The Al-Aqsa Mosque is waiting. Know that even though the occupiers [Jews] have defiled the Al-Aqsa Mosque, the heroes of Gaza are making preparations, and they are digging tunnels that will enable them to reach Al-Aqsa. One day, they will emerge in the courtyards, the squares, the streets, and alleys [of Jerusalem], proclaiming “Allah Akbar,” and they will issue a call to arms against the brothers of apes and pigs. […] Al-Aqsa expects the heroes of the West Bank to launch Jihad, and to kill all the settlers… We shall emerge victorious, Allah willing, because Allah is with us, because it was promised by the Prophet Muhammad, and because there are mujahideen, and martyrdom-seekers among us… We shall emerge victorious, Allah willing, because we have among us people who don explosives belts, awaiting their journey to Paradise, to meet the Prophet Muhammad and his Companions. With all those, we shall emerge victorious, Allah willing. […] We await a decision of our leader, who will say to us: “You will all be praying your afternoon prayer in Tel Aviv, Allah willing.”

The Muslim prophet Muhammad used the epithets “apes/monkeys” and/or “pigs” (again, per Koran 5:60) to characterize Jewish victims of his jihadist campaigns, notably the Qurayza tribe, whose males Islam’s prophet himself subsequently beheaded. Just prior to orchestrating the en masse execution of the adult males from the besieged Medinan Jewish tribe the Banu Qurayzah (and distributing their women, children, and possessions as slave “booty” for the Muslims), Muhammad, according to his earliest Muslim biographer, Ibn Ishaq (d. 767-770), addressed these Jews with menacing, hateful derision: “You brothers of monkeys, has God disgraced you and brought His vengeance upon you?” (Another early Muslim biographer of Muhammad, Ibn Sa‘d [d. 845], reports that Muhammad stated, “brothers of monkeys and pigs, fear me, fear me!”).

A consensus Muslim account of the massacre of the Qurayzah has emerged as conveyed by classical Muslim scholars of hadith (putative utterances and acts of Muhammad, recorded by pious Muslim transmitters), biographers of Muhammad’s life (especially Ibn Ishaq), jurists, and historians. This narrative is summarized as follows: Alleged to have aided the forces of Muhammad’s enemies in violation of a prior pact, the Qurayzah were subsequently isolated and besieged. Twice the Qurayzah made offers to surrender and depart from their stronghold, leaving behind their land and property. Initially they asked to take one camel load of possessions per person, but when Muhammad refused this request, the Qurayzah asked to be allowed to depart without any property, taking with them only their families. However, Muhammad insisted that the Qurayzah surrender unconditionally and subject themselves to his judgment. Compelled to surrender, the Qurayzah were led to Medina. The men, with their hands pinioned behind their backs, were assembled in a court, while the women and children were said to have been gathered into a separate court. A third (and final) appeal for leniency for the Qurayzah was made to Muhammad by their tribal allies the Aus. Muhammad again declined, and instead he appointed as arbiter Sa’d Mu’adh from the Aus, who soon rendered his concise verdict: The men were to be put to death, the women and children sold into slavery, the spoils to be divided among the Muslims.

Muhammad ratified the judgment stating that Sa’d’s decree was a decree of God pronounced from above the Seven Heavens. Thus some six hundred to nine hundred men from the Qurayzah were led on Muhammad’s order to the Market of Medina. Trenches were dug, and all the men, including barely post-pubescent males were beheaded by Muhammad (per Ibn Ishaq); their heads, and decapitated corpses were buried en masse in the trenches while Muhammad watched. Here is Ibn Ishaq’s description of Muhammad’s mass beheading of the Banu Qurayzah males:

Then they [the men, including post-pubescent boys, of the Jewish tribe] surrendered, and the apostle [i.e., Muhammad] confined them in Medina in the quarter of d. al-Harith, a woman of B. Al-Najjar. Then the apostle went out to the market of Medina (which is still its market today) and dug trenches in it. Then he sent for them and struck off their heads in those trenches as they were brought out to him in batches. Among them was the enemy of Allah Huyayy b. Akhtab and Ka’b b. Asad their chief. There were 600 or 700 in all, though some put the figure as high as 800 or 900. As they were being taken out in batches to the apostle they asked Ka’b what he thought would be done with them. He replied, “Will you never understand? Don’t you see that the summoner never stops and those who are taken away do not return? By Allah it is death!” This went on until the apostle made an end of them.

Male youths who had not reached puberty were spared. Women and children were sold into slavery, a number of them being distributed as gifts among Muhammad’s companions. According to Muhammad’s biographer Ibn Ishaq, Muhammad chose one of the Qurayzah women (Rayhana) for himself. The Qurayzah’s property and other possessions (including weapons) were also divided up as additional ‘booty’ among the Muslims. The following details have been chronicled consistently by Muslim sources: The arbiter, Sa’d Mu’adh was appointed by Muhammad himself; Muhammad observed in person the horrific executions; Muhammad claimed as a wife a woman (Rayhana) previously married to one of the slaughtered Qurayzah tribesmen; the substantial material benefits (i.e. property, receipts from the sale of the enslaved) that accrued to the Muslims as a result of the massacre; the extinction of the Qurayzah.

Following a later campaign against the Jews of the Khaybar oasis, Muhammad told those surviving his slaughter, and rapine, “As for you, I hate you more than monkeys and pigs.” This campaign featured brutal assassinations of Khaybar’s Jewish leaders, including the torture-murder of one leader, Kinana, specifically ordered by Muhammad for alleged concealment of his “treasure” from the Muslim prophet. Here is Ibn Ishaq’s description of Muhammad’s behavior toward Kinana:

When the apostle [Muhammad] said to Kinana, “Do you know that if we find you have it [the treasure] I shall kill you?” He [Kinana] said “Yes.” The apostle gave orders that the ruin was to be excavated and some of the treasure was found. When he asked him about the rest he refused to produce it, so the apostle gave orders to al-Zubayr Al-Awwam, “Torture him until you extract what he has.” So he kindled a fire with flint and steel on his chest until he was nearly dead. Then the apostle delivered him to Muhammad b. Maslama and he struck off his head…

It is hardly just “local, radical Palestinian imams” who reiterate Muhammad’s Jew-hating pronouncements and actions to incite the merciless killing, and dismemberment of Israeli Jews. The canonical hadith of Jew-annihilation (Sahih Muslim Book 041, # 6985) to usher in Islam’s “messianic age”—as uttered by Muhammad—has been a staple of Palestinian Muslim discourse dating from ex-Grand Mufti of Jerusalem Hajj Amin el-Husseini’s 1937 “fatwa” on the Jews, through the 1988 Hamas Charter, till now. Thus current Palestinian Authority Grand Mufti, Muhammad Hussein, declared in January 2012,

47 years ago the [Fatah] revolution started. Which revolution? The modern revolution of the Palestinian people’s history. In fact, Palestine in its entirety is a revolution, since [Caliph] Umar came [to conquer Jerusalem, 637 CE], and continuing today, and until the End of Days. The reliable Hadith (tradition attributed to Muhammad), [found] in the two reliable collections, Bukhari and Muslim, says: “The Hour [of Resurrection] will not come until you fight the Jews. The Jew will hide behind stones or trees. Then the stones or trees will call: ‘Oh Muslim, servant of Allah, there is a Jew behind me, come and kill him.’ Except the Gharqad tree [which will keep silent].” Therefore it is no wonder that you see Gharqad [trees] surrounding the [Israeli] settlements and colonies…

The unrelenting, monotonous repetition of this sacralized Islamic Jew-hatred—embodied in Muhammad’s words and deeds—must be acknowledged and denounced by all those who truly seek peace between Palestinian Muslims, and Israeli Jews.