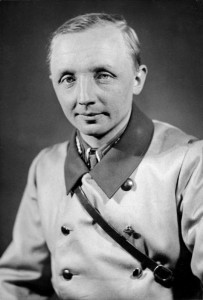 Johannes “Omar Amin” von Leers: The Nazi Disciple of Hajj Amin el-Husseini Who Converted to Islam, Found a Haven in Egypt, and Embraced a More Potent Ideology to Destroy the Judeo-Christian West—Islamic Jihad

As I noted in my analysis [summary blog; full analyses here; and here] of Hajj Amin el-Husseini’s 1937 fatwa on the Jews—which re-affirms canonical Islam’s Jew-hating motifs used to foment murderous violence against them by Muhammad himself, since the advent of Islam, till now—this seminal proclamation of incitement by the “Godfather” of the Palestinian Muslim movement, was pure Islamic dogma, devoid of any themes from the writings of Nazi racial theorists, epitomized by Johan [aka, Johann, Johannes] von Leers. [See Foreword by Julian Huxley. History on a Racial Basis (an abridged translation of Geschichte auf Rassicher Grundlage), London, 1936. http://bit.ly/1aPyFom]

Leers (d. 1965), is a fascinating case study. By any objective standard, his career trajectory—as a favored contributor in Goebbels’s propa­ganda ministry, to his eventual adoption of Islam (as Omar Amin von Leers) while working as an anti-Western, and antisemitic/ anti-Zionist propagandist under Nasser’s regime from the mid-1950s, until his death in 1965—represents the “Islamification of Nazism,” rather than a “Nazification of Islam.” The discussion which follows is drawn from, and referenced in, my The Legacy of Islamic Antisemitism, pp. 168-169, 204-205, 619-625; and Sharia Versus Freedom, Amherst, N.Y., 2012, pp. 252-259, 610-614)

None of the important data summarized below have been described by Jeffrey Herf, an avatar of the “Nazification of Islam” hypothesis. In his The Jewish Enemy—Nazi Propaganda during World War II and the Holocaust, Cambridge, 2006, pp. 180–81, Herf included a very limited English translation extract of von Leers’ conclusions from the 1942 essay “Judentum und Islam als Gegensatze,” (in Die Judenfrage in Politik, Recht, and Wirtschaft 6, no. 24, December 24, 1942): 275–78), whose fully annotated translation (as “Judaism and Islam as Opposites”) I provided in The Legacy of Islamic Antisemitism (pp. 619-625). Herf even failed to mention von Leers’ subsequent conversion to Islam, and was also oblivious to the Nazi author’s thorough grounding in, and accurate representation of, the pious Muslim sources (i.e., Koran, hadith, and sira). This negationist approach of German fluent “Nazification of Islam” historians such as Herf compounds their failure to deal with the quintessential, canonical Islamic motifs of el-Husseini’s 1937 Islamic fatwa—available in German since 1938—in an informed, intellectually honest manner

Upon his arrival in Egypt in 1956, it was Hajj Amin el-Husseini, who oversaw von Leers’ formal conversion to Islam, and remained one of his confidants. Leers described the origins of the Muslim “forename,” Omar Amin, that he adopted as part of his conversion to Islam in a November, 1957 letter to American Nazi H. Keith Thompson:

I myself have embraced Islam and accepted the new forename Omar Amin, Omar according to the great Caliph Omar who was a grim enemy of the Jews, Amin in honor of my friend Hajj Amin el Husseini, the Grand Mufti.

Already in essays published during 1938 and 1942, the first dating back almost two decades before his conversion to Islam while in Egypt, von Leers produced analyses focused primarily on Muhammad’s interactions with the Jews of Medina. These essays reveal his pious reverence for Islam and its prophet and a thorough understanding of the sacralized Islamic sources for this narrative, that is, the Koran, hadith, and sira, which is entirely consistent with standard Muslim apologetics.

Leers’s 1942 essay simultaneously extols the “model” of oppression the Jews experienced under Islamic suzerainty and the nobility of Muhammad, Islam, and the contemporary Muslims of the World War II era, foreshadowing his own conversion to Islam just over a decade later. And even earlier, in a 1938 essay, von Leers sympathized with “the leading role of the Grand Mufti of Jerusalem. in the Arabians’ battles against the Jewish invasion in Palestine.”

Leers’ 1942 essay also provides a reverent summary characterization of Muhammad’s activities in Mecca, and later Medina, which is entirely consistent with standard Muslim apologetics. Citing (or referring to) the relevant foundational text sources (i.e., Koran 13:36; 8:55-58; 59:1-15; the sira and canonical hadith descriptions of the fate of individual Jews such as Abu Afak and Ka’b ibn Ashraf and the Jewish tribes Banu Qaynuqa, Banu Nadir, Banu Qurayza, as well as the Jews of the Khaybar oasis), von Leers chronicles Muhammad’s successful campaigns that vanquished these Jews, killing and dispersing them, “or at most allow[ing] them to remain in certain places if they paid a poll tax.” Von Leers further describes the accounts (from the hadith, and, more elaborately, the sira) of Muhammad’s poisoning by a Khaybar Jewess, and also notes the canonical hadith that records Caliph Umar’s rationale for his putative expulsion from northern Arabia of those remaining Jews who survived Muhammad’s earlier campaigns. And von Leers (like Hajj Amin el-Husseini) even invokes the apocalyptic canonical hadith that forty-six years later became the keystone of Hamas’s 1988 charter sanctioning a jihad genocide against the Jewish State of Israel. Von Leers concludes his 1942 essay by acknowledging and endorsing the chronic, humiliating oppression imposed upon the Jews under Islam, while contrasting their perfidy with the nobility of Muhammad and the contemporary Muslims of the World War II era he idealized, before eventually converting to Islam himself, in the mid-1950s.

I was able to obtain (from the Russian State Military Archive of captured Nazi documents), and have translated from the original German, an unpublished, approximately six-thousand-word essay Leers wrote during World War II (apparently in 1942–1943), titled, “Philosophies of Peace and War in Islam.” The views expressed by von Leers on jihad during the same era, prior to his formal conversion to Islam, were remarkably concordant with those of the classical Islamic legists, and modern era traditionalists. Disingenuously ignoring the explicit imperial designs of jihad—to subjugate all of mankind under Islamic law, as detailed with lucidity in the Koran, sunna, and a millennial continuum of Muslim jurisprudence—von Leers provides this hagiographic overview of Islam’s bellicose institution for global conquest, linked to his condemnation of Western European Christendom. Predictably, Leers also highlights this traditional Koranic statement of Jewish perfidy in relation to wartime treaties. But again, Leers “exegesis” on Koran 8:55 is entirely consistent with the gloss on this verse in the authoritative Koranic commentary Tafsir al-Jalalayn (p. 390), which maintains that 8:55 refers specifically to the Jewish tribe Banu Qurayza.

An October 1957 US intelligence report on von Leers’ writing and activities for Egypt and the Arab League confirmed his complete adoption of the triumphal Muslim worldview, desirous of nothing less than the destruction of Judeo-Christian civilization by jihad:

He [Dr. Omar Amin von Leers] is becoming more and more a religious zealot, even to the extent of advocating an expansion of Islam in Europe in order to bring about stronger unity through a common religion. This expansion he believes can come not only from contact with the Arabs in the Near East and Africa but with Islamic elements in the USSR. The results he envisions as the formation of a political bloc against which neither East nor West could prevail.