Ashley “Buonanno” Kalus: Excerpts From A Revealing, If Disastrous Interview

Posted on 17th September 2022 | Comments Off on Ashley “Buonanno” Kalus: Excerpts From A Revealing, If Disastrous Interview 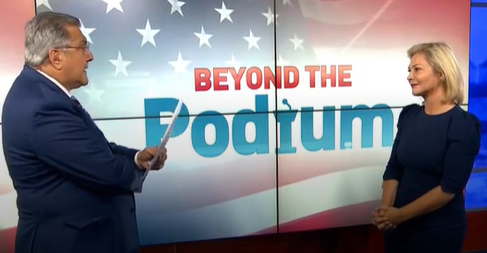 Friday September 16, 2022, WJAR’s Gene Valicenti interviewed Rhode Island Republican nominee for Governor, Ashley Kalus. Ms. Kalus’s comments about defeated Democratic hopeful for Governor, Helena Buonanno Foulkes were both absurd and deeply disappointing. Her comments about Florida Governor Ron Desantis were cowardly and ignorant. Klaus clearly doesn’t want to deal with illegal immigration as is typical of very soft, so-called “pro-business” Republicans. She could have simply said she is opposed to open borders and illegal immigration, favors strict national border enforcement, and certainly opposes sanctuary state status for Rhode Island. Moreover, she sympathizes with the plight of southern non-sanctuary states and their Governors who are the victims of Biden’s and the Democrats destructive open borders policies. States/localities who have sanctuary policies, like Massachusetts/Martha’s Vineyard, are appropriate targets for busing illegal aliens from states like Florida and Texas, who do not.

Below are res ipsa loquitur excerpts from the interview.

[Valicenti]: “Who is your political hero and why?”

[Kalus]: “I would have to say right now it is Helena Foulkes. She ran a great campaign. She is smart, successful, and she was in it for the right reasons”

Valicenti]: “A couple of weeks ago you were asked who your political hero was, and you said ‘Desantis’

Valicenti]: “I asked you today who your political hero was and now you say Helena Foulkes. What exit are we getting off here?…You liked Desantis the way he ran Florida, you didn’t like that he sent a couple of plane loads of migrants to Martha’s Vineyard?”

Valicenti]: “You wouldn’t like that if he did that to Rhode Island, would you?”

[Kalus]: “As a Governor of Rhode Island? I don’t think any Governor would like to deal with that. I mean you’re gonna…we have a housing crisis now. We have a homelessness crisis, and so that would be difficult for any Governor to deal with.”