“When you start to deal with mentalities that say it is unethical to do randomized, controlled trials [of masking] in children yet it is ethical to just mask them up almost indefinitely, then we have a serious problem on our hands”

–Covid-19 is a mercifully mild disease in children, even in comparison to seasonal, let alone pandemic influenza

–Locally, here in Rhode Island despite some 2/3, or more, of newborns to 18 year-olds having contracted covid-19 during the past 2-years, there have been ZERO covid-19 deaths in that age range. Moreover, according to the American Academy of Pediatrics, 3 other states, in addition to Rhode Island, have also reported ZERO pediatric covid-19 deaths.

–Contrast that to a single recent pandemic influenza year, during the 2009 H1N1 swine flu pandemic, when there were 3 bona fide influenza pneumonia deaths among newborns to 18 year-olds in Rhode Island (see Table 1.)

–Since some prominent Rhode Island public health personalities have compared childhood covid-19 vaccination to childhood polio vaccination, consider that during the first 10-months of 1953, of 289 cases of polio recorded here in Rhode Island, there were 15 deaths, a more than 5% mortality. Again, juxtapose those hard, alarming polio data to thousands of Rhode Island covid-19 cases among newborns to 18 year-olds over the past 2-years with, thank goodness, ZERO deaths. Indeed, the American Academy of Pediatrics reports that 0.00 to 0.01% of covid-19 cases in children result in death—the highest risk being 1/10,000. The risk of covid-19 death in healthy children, free of comorbidity, specifically, approximates ZERO.

–Rhode Island’s Covid-19 deaths in fact have occurred overwhelmingly at the other end of the age spectrum, in conjunction, most often, with extensive comorbidity:

–Finally, despite counterfactual, & I might add, perverse & dehumanizing “concerns” about children as “vectors of infection for the vulnerable elderly,” a review just published in the April, 2022 edition of The Pediatric Infectious Disease Journal, entitled, “The Role of Children and Young People in the Transmission of SARS-CoV-2,” concluded: “there is NO convincing evidence to date, 2 years into the pandemic, that children are key drivers of the pandemic.” Notably, a data analysis [published in the flagship journal Pediatrics] of 783 schools in the United States when the delta strain was dominant that included data of ~60,000 students and 12,000 teaching personnel from kindergarten to grade 12 found that the risk of within-school transmission was lower than the risk of transmission in the community.

Childhood covid-19 disease burden, however, is not exclusively defined by mortality; it includes morbidity. To that end, I have begun analyzing hospitalization datasets I purchased from RIDOH for all hospitalizations in our state, organized by what are called ICD diagnostic codes, for calendar years 2019, 2020, and 2021, comparing influenza and covid-19 hospitalizations among children, up to age 18. My initial analyses are summarized in the tables provided, below. 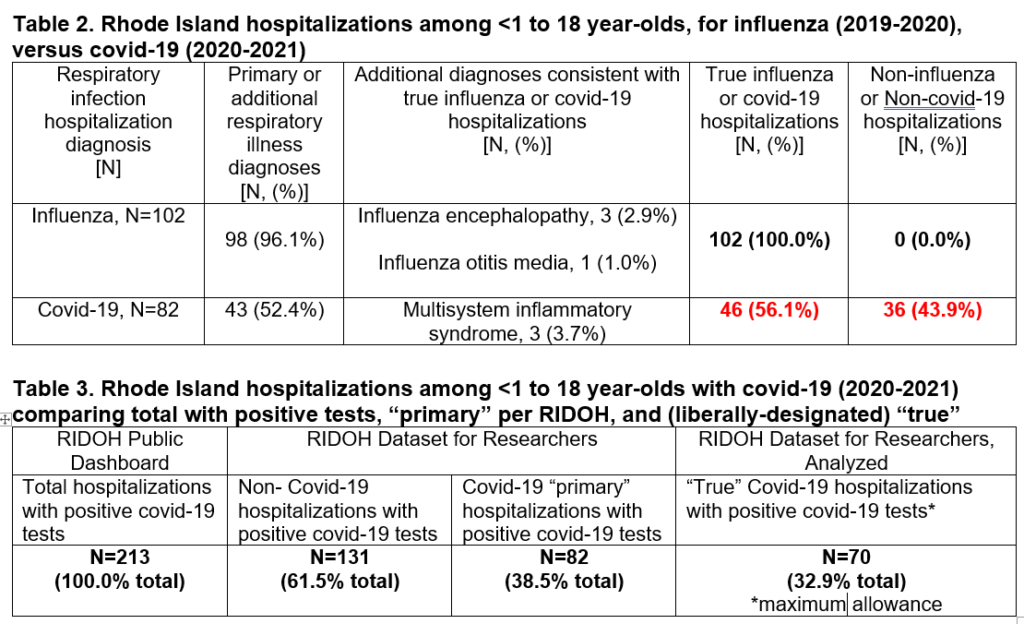 What is the evidence that masking of children in schools can reduce their risk for contracting and transmitting covid-19 regardless of their very low risk for clinically significant disease?

First of all, since at least the early 1960s we have known only randomized controlled trials—true experimental designs—can provide such evidence. Purely observational studies and all other non-randomized designs lacking randomly assigned, parallel control groups, have intractable biases we attempt to control for, with limited success, after the fact. Guyatt et al in their 2008 BMJ paper “GRADE: an emerging consensus on rating quality of evidence and strength of recommendations”, updated and reinforced these ideas, appropriately assigning highest priority to randomized, controlled trial evidence for making RECOMMENDATIONS—not MANDATES, for public health guidelines

Ten negative randomized-controlled of community masking in those 18-years of age and older, focusing primarily on influenza prevention, reported between 2008 to 2016, were “meta-analyzed” [their data “pooled”], confirming the individual negative results. Independently validating these pooled findings are the results from a single large randomized controlled trial of masking among a cohort of Hajj pilgrims whose enrollment [n=6338] equaled the sum enrollment of all the 10 studies in the May, 2020 “meta-analysis.” Published online in mid-October, 2020, this “cluster randomized” (i.e., by tent) controlled trial confirmed mask usage did not reduce the incidence of clinically defined, or laboratory-confirmed respiratory viral infections, primarily influenza and/or rhinovirus. Indeed, there was a suggestion masking increased laboratory-confirmed infections by 40%, although this trend was not “statistically significant.”

Subsequently, Danish investigators published results, during mid-November, 2020, of a randomized, controlled study conducted in 4862 persons which found that masking did not reduce SARS-CoV-2 (covid-19) infection rates to a statistically significant, or clinically relevant extent.  Covid-19 infections (detected by laboratory testing or hospital diagnosis) occurred among 1.8% of those assigned masks, versus 2.1% in control participants. Moreover, a secondary analysis including only participants who reported wearing face masks “exactly as instructed,” revealed a further narrowing of this non-significant, clinically meaningless infection rate “difference” to 0.1%, i.e., 2.0% in mask wearers versus 2.1% in controls.

Finally, a vast (n=342,000) Bangladesh randomized trial of community masking, reported 8/31/21 as a preprint, found cloth masks did not prevent SARS-CoV-2 infections. Odd, contradictory findings were described regarding surgical masks: they conferred a minimal, clinically irrelevant overall absolute risk reduction of 0.09%, which was somehow selectively limited only to those over 50 years old. However, a re-analysis of the raw data using appropriate statistical methods, found no evidence of benefit of paper masks either, in any subgroup.

In aggregate from 2008 through August 2021, these thirteen negative randomized controlled trials of community masking for the prevention of respiratory viral infections, including SARS-CoV-2, underscore the punitive, anti-scientific fecklessness of public mask mandates.

For children the situation is actually worse. There are ZERO randomized controlled trials of community masking that have been reported, although we know a 40,000 person trial was recently completed in Guinea-Bissau which included children down to the age of 10, The results have not yet been released.

Lastly, there are potential medical and psychological problems created by masking, although the evidence is very preliminary and NOT strong.

–Those who have myopia/ near sightedness can have difficulty seeing because the mask fogs their glasses. (This has long been a problem for medical students in the operating room.)

–Masks can cause severe acne and other skin problems. (My wife is a Dermatologist here in RI who has seen many such patients in the past 2 years)

[The points above, per John Hopkins University MD-Epidemiologist Marty Makary’s summary in the WSJ]

–The discomfort of a mask distracts some children from learning, and can cause social isolation as described during the 2003 SARS-CoV-1 epidemic in a Hong Kong study of preschool children.

–By increasing airway resistance during exhalation, masking can lead to increased levels of carbon dioxide in the blood:

–A 2021 cross-sectional survey of 1001 Singapore residents assessed before & during mask use found self-reported dyspnea (SOB) was associated with moderate physical activity, use for ≥ 3 hours, & use of an N95 vs. surgical mask

— Finally a controlled study of 72 children, aged 6–14 years old using the Cambridge Face Memory Test, a validated measure of face perception performance, revealed “substantial quantitative and qualitative alterations in the processing of masked faces in school-age children,” which “could have significant effects on children’s social interactions with their peers and their ability to form relationships with educators.”