“When do you think we can stop wearing masks when we go out in public?”

While offering the vague promise of a respite, perhaps by the summer, Dr. MacDonald reiterated the evidence-devoid bureaucratic blather sustaining this current covid-19 policy in Rhode Island:

“Let me answer that in a couple of different ways. One is when you will have to stop, and when you could stop. Because right now, it’s a requirement to wear a mask, and I think it’s gonna shift to a recommendation. So let’s put that off for a while. Maybe come summertime, it’ll be a recommendation. We have to wait and see. Some of that will depend on how many people get vaccinated, and what we see with our case positivity rate, and what we see with hospitalizations. Let’s wait and see. I’m kinda hoping for a nice New England summer to tell you the truth. We need a good summer in Rhode Island.”

Dr. MacDonald and his public health official ilk rely upon purely observational data to support their hollow claim that masking somehow reduces covid-19 infection rates. I don’t. Regardless, illustrated in the figure below, constructed from public RIDOH data available here, but never presented transparently in such a straightforward manner by RIDOH itself, is a simple graphic of the actual observational data on masking and 7-day averaged covid-19 infection rates in Rhode Island. This figure puts the lie to such Rhode Island state government-mandated “science.” What the figure likely depicts, independent of “masking,” are known seasonal trends for respiratory viruses, including coronaviruses, and classic epidemic curves that reflect the progressive development of herd immunity as the pool of individuals recovering from their covid-19 infections steadily expands, and is now blunting epidemic transmission. 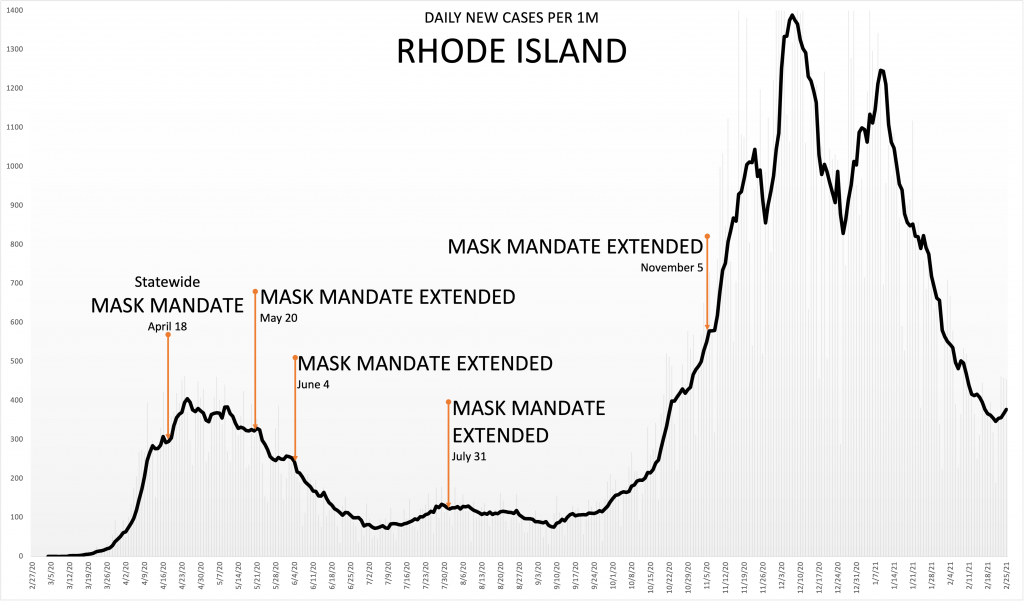 Pathognomonic of such officials, RIDOH Medical Director MacDonald also blithely ignores the past 12-years of consistent randomized controlled trial data—our gold-standard for establishing medical efficacy, which I do abide. These hard data have demonstrated consistently that non-medical masking does not reduce the incidence of respiratory viral infections, including covid-19. Instead, rejecting such true evidence-based medicine, Dr. MacDonald accepts the “benefit” of masking as somehow axiomatic. Accordingly, he insists that certain ill-defined benchmarks must be achieved before mandatory masking could possibly be “shifted to a recommendation.” The time frame for this best-case scenario would be four more months of the mask mandate’s arbitrary, counterfactual application, until “a nice New England summer.”

Rhode Islanders, and all Americans under the yoke of ill-conceived public mask mandates, deserve much better from their public health officials. Most importantly, they need to understand the complete absence of high-quality, practical, field tested evidence supporting involuntary, coercive public masking policies—if the figure above wasn’t convincing enough on its own.

Infectious diseases expert, and then executive officer of the California State Board of Health, W.H. Kellogg, MD, provided this honest 1920 mea culpa on the failure of masking to contain influenza proliferation during the catastrophic 1918 influenza pandemic:

A century after Dr. Kellogg’s frank lament, there are no randomized, controlled trial data—again, the gold-standard for validating medical interventions—which support masking in non-healthcare settings, to attenuate the epidemic spread of respiratory viruses. We now have randomized, controlled clinical trial data  that covid-19 is no exception to that rule.

Last May, 2020, the U.S. Centers for Disease Control and Prevention’s (CDC’s) own “house journal” Emerging Infectious Diseases published a pooled (so-called “meta”-) analysis of 10 controlled trials which revealed non-medical setting masks did not reduce the rate of laboratory-proven infections with the respiratory virus influenza. The findings from this unique report are directly germane to the question of masking to prevent covid-19 infection, and merit some elaboration.

Ten randomized, controlled trials reporting estimates of face mask effectiveness in lowering rates of laboratory-confirmed influenza within the community, published between 2008 and 2016, were analyzed, and pooled, applying a standardized, rigorous methodology. One study evaluated mask usage by Hajj pilgrims to Mecca, two university setting studies assessed the efficacy of face masks for prevention of confirmed influenza among student campus residents over 5-months of surveillance, and seven household studies examined the impact of masking infected persons, only (one), household contacts of infected persons, only (one), or both groups (five). None of these studies, individually, or their aggregated, pooled analysis, which enhanced the overall “statistical power” to detect smaller effects, demonstrated a significant benefit of masking for the reduction of confirmed influenza infection (also see this tabulation). The authors further concluded with a caution that using face masks improperly might, “increase the risk for (viral) transmission.”

Independently validating these pooled findings are the results from a single large randomized controlled trial of masking among another cohort of Hajj pilgrims whose enrollment (n=6338) equaled the sum enrollment of all the ten studies in the May, 2020 “meta-analysis.” Published online in mid-October, 2020, this “cluster randomized” (i.e., by tent) controlled trial confirmed mask usage did not reduce the incidence of clinically defined, or laboratory-confirmed respiratory viral infections, primarily influenza and/or rhinovirus. Indeed, there was a suggestion masking increased laboratory-confirmed infections by 40%, although this trend was not “statistically significant.”

Finally, Danish investigators published the results during mid-November, 2020 of a randomized, controlled study conducted in 4862 persons which found that masking did not reduce SARS-CoV-2 (covid-19) infection rates to a statistically significant, or clinically relevant extent. Covid-19 infections (detected by laboratory testing or hospital diagnosis) occurred among 1.8% of those assigned masks, versus 2.1% in control participants. Moreover, a secondary analysis including only participants who reported wearing face masks “exactly as instructed,” revealed a further narrowing of this non-significant, clinically meaningless infection rate “difference” to 0.1%, i.e., 2.0% in mask wearers versus 2.1% in controls.

Despite a mask mandate in place, and extended unremittingly, four times since April 18, 2020, Rhode Island has experienced the third highest per capita covid-19 mortality in the United States (as of February 24, 2021). Florida is a state with at least the same demographic challenges as Rhode Island—a large elderly cohort, and ten cities with populations greater than Providence. Currently, Florida ranks 30th in per capita covid-19 mortality. In stark contrast to the mandatory state mask edicts still imposed upon Rhode Islanders, Florida’s Governor Desantis actually signed an executive order September 25, 2020 which banned local governments from enforcing mask mandate “violations,” preventing them from fining people for mask “non-compliance.”

A pdf file version of this blog can be uploaded: