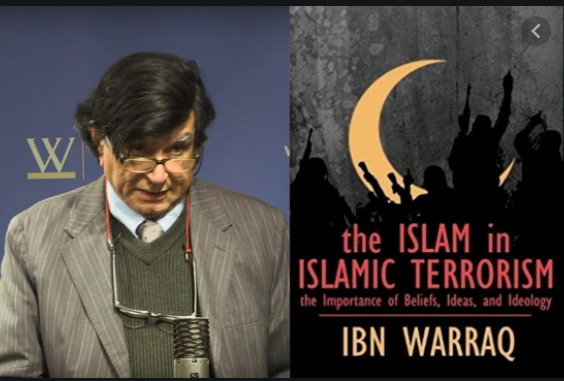 His statement from September 2001 in the immediate aftermath of the horrific acts of jihad terrorism on 9/11/2001, contains irrefragable truths still tragically ignored by our religious, and perhaps more importantly, policymaking elites, both military and diplomatic.

Nearly all of what has been written ever since is a footnote.

Ibn Warraq’s statement, issued shortly after 9/11/2001, is reproduced below (minus a naive, brief passing reference to “International Law”):

Given the stupefying enormity of the acts of barbarism of 11 September, moral outrage is appropriate and justified, as are demands for punishment. But a civilized society cannot permit blind attacks on all those perceived as “Muslims” or Arabs.  Not all Muslims or all Arabs are terrorists. Nor are they implicated in the horrendous events of Tuesday. Police protection for individual Muslims, mosques and other institutions must be increased.

However, to pretend that Islam has nothing to do with Terrorist Tuesday is to willfully ignore the obvious and to forever misinterpret events. Without Islam the long-term strategy and individual acts of violence by Usama bin Laden and his followers make little sense. The West needs to understand them in order to be able to deal with them and avoid past mistakes. We are confronted with Islamic terrorists and must take seriously the Islamic component. Westerners in general, and Americans in particular, do not understand the passionate, religious, and anti-western convictions of Islamic terrorists. These Allah-intoxicated fanatics blindly throw away their lives in return for the Paradise of Seventy Two Virgins offered Muslim martyrs killed in the Holy War against all infidels.

Jihad is “a religious war with those who are unbelievers in the mission of the prophet Muhammad  [the prophet]. It is an incumbent religious duty, established in the Qur’an and in the Traditions as a divine institution, and enjoined specially for the purpose of advancing Islam and repelling evil from Muslims” [1].

The world is divided into two spheres, Dar al-Islam and Dar al-Harb. The latter, the Land of Warfare, is a country belonging to infidels which has not been subdued by Islam. The Dar al-Harb becomes the Dar-al Islam, the Land of Islam, upon the promulgation of the edicts of Islam. Thus the totalitarian nature of Islam is nowhere more apparent than in the concept of Jihad, the Holy War, whose ultimate aim is to conquer the entire world and submit it to the one true faith, to the law of Allah. To Islam alone has been granted the truth: there is no possibility of salvation outside it. Muslims must fight and kill in the name of Allah.

We read (IX. 5-6):“Kill those who join other gods with Allah wherever you may find them”;

IV.76: “Those who believe fight in the cause of Allah”;

VIII.39-42: “Say to the Infidels: if they desist from their unbelief, what is now past shall be forgiven; but if they return to it, they have already before them the doom of the ancients! Fight then against them till strife be at an end, and the religion be all of it Allah’s.” Those who die fighting for the only true religion, Islam, will be amply rewarded in the life to come:

IV.74: “Let those who fight in the cause of Allah who barter the life of this world for that which is to come; for whoever fights on Allah’s path, whether he is killed or triumphs, We will give him a handsome reward.”

What should we make with these further  unfortunate verses from the Qur’an:

It is surely time for us who live in the West and enjoy freedom of expression to examine unflinchingly and unapologetically the tenets of these fanatics, including the Qur’an which divinely sanctions violence. We should unapologetically examine the life of the prophet, who was not above political assassinations, and who was responsible for the massacre of the Jews.

“Ah, but you are confusing Islam with Islamic fundamentalism. The Real Islam has nothing to do with violence,” apologists of Islam argue.

There may be moderate Muslims, but Islam itself is not moderate. There is no difference between Islam and Islamic fundamentalism: at most there is a difference of degree but not of kind. All the tenets of Islamic fundamentalism are derived from the Qur’an, the Sunna, and the Hadith – Islamic fundamentalism is a totalitarian construct derived by Muslim jurists from the fundamental and defining texts of Islam. The fundamentalists, with greater logic and coherence than so-called moderate or liberal Muslims, have made Islam the basis of a radical utopian ideology that aims to replace capitalism and democracy as the reigning world system. Islamism accounts for the anti-American hatred to be found in places far from the Arab-Israeli conflict, like Nigeria and Afghanistan, demonstrating that the Middle East conflict cannot   legitimately be used to explain this phenomenon called Islamism. A Palestinian involved in the WTC bombings would be seen as a martyr to the Palestinian cause, but even more as a martyr to Islam.

“Ah, but Islamic fundamentalism is like any other kind of fundamentalism, one must not demonise it. It is the result of political, social grievances. It must be explained in terms of economics and not religion,” continue the apologists of Islam.

There are enormous differences between Islamic fundamentalism and any other kind of modern fundamentalism. It is true that Hindu, Jewish, and Christian fundamentalists have been responsible for acts of violence, but these have been confined to particular countries and regions. Islamic fundamentalism has global aspirations: the submission of the entire world to the all-embracing Shari’a, Islamic Law, a fascist system of dictates designed to control every single act of all individuals. Nor do Hindus or Jews seek to convert the world to their religion. Christians do indulge in proselytism but no longer use acts of violence or international terrorism to achieve their aims.

Only Islam treats non-believers as inferior beings who are expendable in the drive to world hegemony. Islam justifies any means to achieve the end of establishing an Islamic world.

Islamic fundamentalists recruit among Muslim populations, they appeal to Islamic religious symbols, and they motivate their recruits with Islamic doctrine derived from the Qur’an. Economic poverty alone cannot explain the phenomenon of Islamism. Poverty in Brazil or Mexico has not resulted in Christian fundamentalist acts of international terror. Islamists are against what they see as western materialism itself. Their choice is clear: Islam or jahiliyya. The latter term is redefined to mean modern-style jahiliyya of modern, democratic, industrialised societies of Europe and America, where man is under the dominion of man rather than Allah. They totally reject the values of the West, which they feel are poisoning Islamic culture. So, it is not just a question of economics, but of an entirely different worldview, which they wish to impose on the whole world. Sayyid Qutb, the very influential Egyptian Muslim thinker, said that “dominion should be reverted to Allah alone, namely to Islam, that holistic system He conferred upon men. An all-out offensive, a jihad, should be waged against modernity so that this moral rearmament could take place. The ultimate objective is to re-establish the Kingdom of Allah upon earth…”[2]

It is surely time for moderate Muslims to stand up and be counted. I should like to see them do three things:

While it should not be too difficult for moderate Muslims to accept the need to denounce the violence of Terrorist Tuesday, I am not at all optimistic about their courage or willingness to proclaim their love for their chosen country, the USA, or examine the Qur’an critically.

Too many Muslims are taught from an early age that their first allegiance is to Islam. They are exhorted in sermons in mosques, and in books by such Muslim intellectuals as Dr Siddiqui of the Muslim Institute in London, that if the laws of the land conflict with any of the tenets of Islam, then they must break the laws of the infidels, and only follow the Law of Allah, the Shari’a, Islamic Law.

It is a remarkable fact that at the time of the Gulf War, a high proportion of Muslims living in the West supported Saddam Hussein. In the aftermath of the WTC terror, it is now clear from reports in the media that many Muslims, even those living in the West, see these acts of barbarism as acts of heroism; they give their unequivocal support to their hero, Usama bin Laden.

Few Muslims have shown themselves capable of scrutinising their sacred text rationally. Indeed any criticism of their religious tenets is taken as an insult to their faith, for which so many Muslims seem ready to kill (as in the Rushdie affair or the Taslima Nasreen affair). Muslims seem to be unaware that the research of western scholars concerning the existence of figures such as Abraham, Isaac and Joseph or the authorship of the Pentateuch applies directly to their belief system. Furthermore, it is surely totally irrational to continue to believe that the Qur’an is the word of Allah when the slightest amount of rational thought will reveal that the Qur’an contains words and passages addressed to Allah (e.g. VI.104; VI.114; XVII.1; XXVII.91; LXXXI.15-29; lxxxiv.16-19; etc.); or that it is full of historical errors and inconsistencies.

Respect for other cultures, for other values than our own, is a hallmark of a civilised society.  But Multiculturalism is based on some fundamental misconceptions. First, there is the erroneous and sentimental belief that all cultures, deep down, have the same values; or, at least, if different, are equally worthy of respect.  But the truth is that not all cultures have the same values, and not all values are worthy of respect. There is nothing sacrosanct about customs or cultural traditions: they can change under criticism. After all, the secularist values of the West are not much more than two hundred years old.

If these other values are destructive of our own cherished values, are we not justified in fighting them both by intellectual means, that is by reason and argument, and criticism, and by legal means, by making sure the laws and constitution of the country are respected by all?  It becomes a duty to defend those values that we would live by. But here western intellectuals have sadly failed in defending western values, such as rationalism, social pluralism, human rights, the rule of law, representative government, individualism (in the sense that every individual counts, and no individual should be sacrificed for some utopian future collective end), freedom of expression, freedom of and from religion, the rights of minorities, and so on..

Instead, the so-called experts on Islam in western universities, in the media, in the churches and even in government bureaus have become apologists for Islam. They bear some responsibility for creating an atmosphere little short of intellectual terrorism where any criticism of Islam is denounced as fascism, racism, or  “orientalism.” They bear some responsibility for lulling the public into thinking that “The Islamic Threat ” is a myth. It is our duty to fight this intellectual terrorism. It is our duty to defend the values of liberal democracy.