Posted on 1st February 2020 | Comments Off on The Trump plan, & the jihadism, & conspiratorial Islamic Jew-hatred which drive the Muslim war against Israel: Andrew Bostom Interview

My Thursday 1/30/20 interview with Alan Keyes which focused on the newly-released Trump plan—summarily rejected (“a thousand no’s”) by Palestinian Authority despot, and “President” (in seeming perpetuity after a single “vote”) Mahmoud Abbas. We discussed the jihadism and conspiratorial Islamic Jew-hatred which remains a permanent obstacle to lasting peace in the Arab Muslims’ and larger global Muslim umma’s conflict with Israel as embodied by these January 1956 joint fatwas from Al-Azhar University, and the Grand Mufti of Egypt (even reported in the U.S. press, at the time): 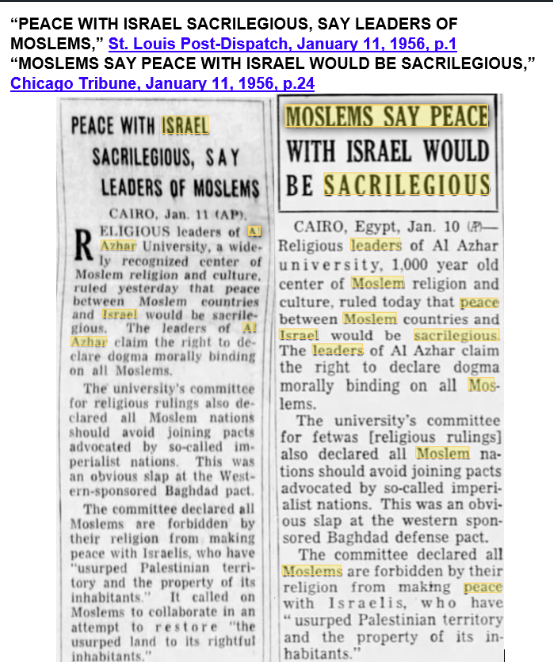 “Consider two complementary fatwas, one written January 5, 1956, by then grand mufti of Egypt, Sheikh Hasan Ma’moun, and another January 9, 1956, signed by the leading members of the Fatwa Committee of Al Azhar University—Sunni Islam’s Vatican—and the major representatives of all four Sunni Islamic schools of jurisprudence. These rulings elaborated the following key initial point: that all of historical Palestine—modern Jordan, Israel, and the disputed territories of Judea and Samaria, as well as Gaza—having been conquered by jihad, was a permanent possession of the global Muslim umma (community), ‘fay territory’—booty or spoils—to be governed eternally by Islamic law.”

Muslims cannot conclude peace with those Jews who have usurped the ter­ritory of Palestine and attacked its people and their property in any manner which allows the Jews to continue as a state in that sacred Muslim territory. [As] Jews have taken a part of Palestine and there established their non-Islamic government and have also evacuated from that part most of its Muslim inhabitants…Jihad…to restore the country to its people…is the duty of all Muslims, not just those who can undertake it. And since all Islamic countries constitute the abode of every Muslim, the Jihad is impera­tive for both the Muslims inhabiting the territory attacked, and Muslims everywhere else because even though some sections have not been attacked directly, the attack nevertheless took place on a part of the Muslim territory which is a legitimate residence for any Muslim… Everyone knows that from the early days of Islam to the present day the Jews have been plotting against Islam and Muslims and the Islamic homeland. They do not propose to be content with the attack they made on Palestine and Al Aqsa Mosque, but they plan for the possession of all Islamic territories from the Nile to the Euphrates.