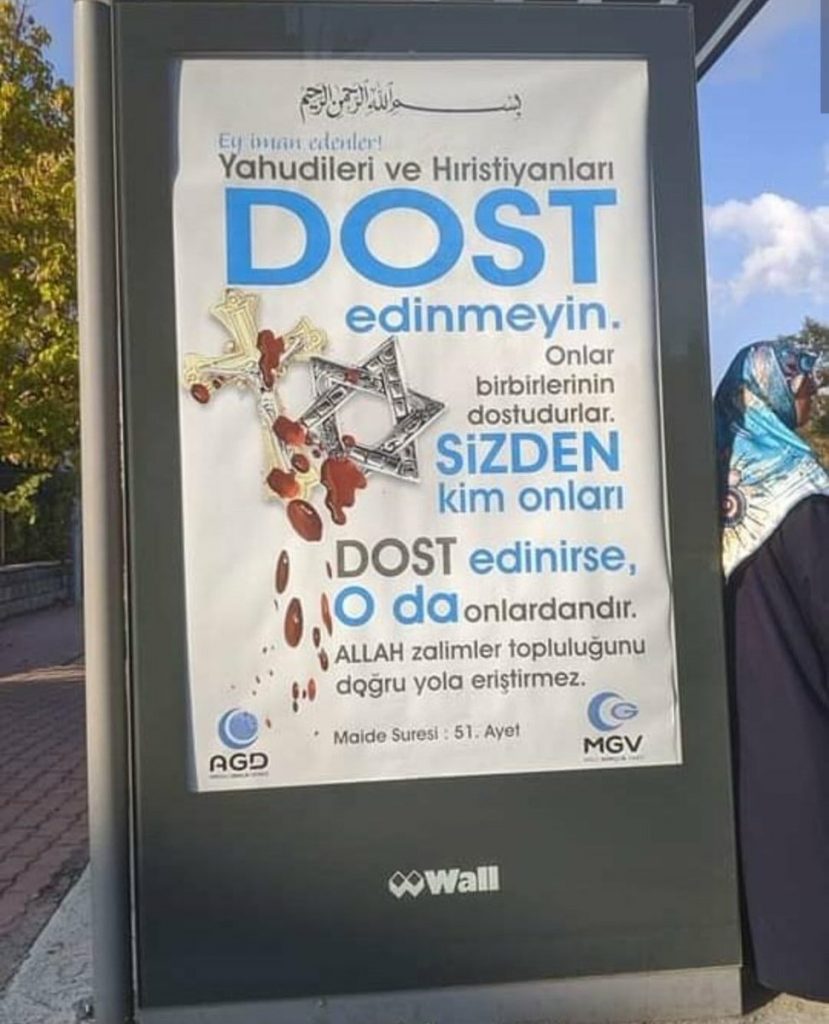 Billboards belonging to the traditionalist Muslim Justice and Development Party (AKP) municipality are on public display in Konya, central Turkey, featuring the verbatim text of Koran 5:51 (in accurate Turkish translation). Accompanied by the image of a blood-splattered cross, and star of David, the text simply re-states Koran 5:51:

O you who believe! Take not the Jews and the Christians as Auliya’ (friends, protectors, helpers, etc.), they are but Auliya’ to one another. And if any amongst you takes them as Auliya’, then surely he is one of them. Verily, Allah guides not those people who are the Zalimun (polytheists and wrong­doers and unjust).

Muhammad Husayn Tabatabai was (d. 1981) a towering modern Muslim religious scholar and philosopher, dubbed a “theosopher.” Allameh [Allamah] Tabatabaei [Tabatabai] University, named in honor of this celebrated authority and “theosopher,” is the largest specialized state social sciences university in Iran and the Middle East, with 17000 students and 500 full-time faculty members. Affirming his continued lofty stature, and relevance, an Iranian national conference was held on May 3, 2012, in Qom, dedicated to “recognizing the interpretative methods and principles used by Allameh [Allamah] Tabatabaee [Tabatabai] in [his Koranic] exegesis.” Tabatabai’s al-Mizān fi tafsir al-Qurʾān “The measure of balance/justly held scales in the interpretation of the Quran,” a 21-volume Arabic opus, is regarded as the most important contemporary Shiite Koranic commentary, and one of the seminal Koranic commentaries of the contemporary era, Sunni, or Shiite.

What follows is Tabatabai’s authoritative gloss on Koran 5:51, which is entirely consistent with the corpus of classical (here; here) and modern (here) Sunni exegeses on this verse:

In a nutshell, Allah warns the believers against taking the Jews and Christians for friends, and threatens them most severely; then points in an apocalyptical way where such friendship was to take them and how it would turn into ruins the magnificent structure of (Islamic) religious character…the clause, “do not take the Jews and Christians for awliya” (friends; protectors), clearly forbids loving them or having any affection towards them; because such feelings pull the souls and spirits toward each other and it creates mutual moral effects on both sides; and if Muslims are influenced by un-Islamic behavior, their society will diverge from its religious way –which is based on the felicity of following the truth—to the way of unbelief—which is based on following low desires and of worshipping Satan…

These billboards inculcating “sacralized” Islamic hatred of Jews and Christians in Turkey will likely continue to bear ugly fruit, manifest in Turkey’s ongoing brutal Christian persecution, and virulent Antisemitism, which have relegated both communities to their traditional humiliated “dhimmi status.”