Posted on 18th May 2019 | Comments Off on Ayaan Understands Islam’s For Prophet, Jew-Hating Jihad 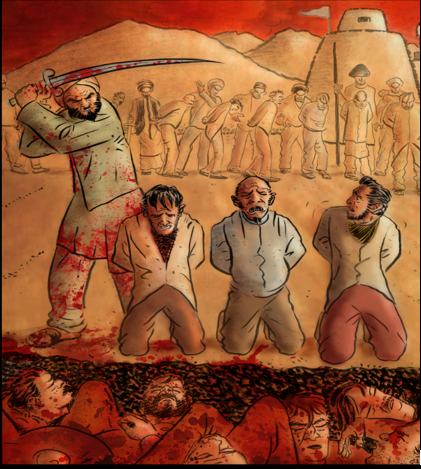 “Then the apostle [Muhammad] went out to the market of Medina and dug trenches in it. Then he sent for them and struck off their heads in those trenches as they were brought out to him in batches”

—The Life of Muhammad. A TRANSLATION OF ISHAQ’S SIRAT RASULALLAH, WITH INTRODUCTION AND NOTES BY A. GUILLAUME, p. 464.

Speaking at the Jewish Public Library in Montreal, on May 13, 2019, Somali ex-Muslim conscientious objector to Islam, Ayaan Hirsi Ali, warned her capacity audience that the “scale and scope”  of Islamic Antisemitism remains incomprehensible to most Westerners, rendering this ugly, burning hatred even more dangerous.

“Little attention is paid (to it) and that is a pity because it is the most zealous, most potent Jew hatred.It both condemns Jews wholesale and seeks to destroy the State of Israel.”

She further maintained that the majority of Muslims have not learned “to think for themselves” and are fearful of disagreeing with what Islam’s prophet Muhammad dictated.  As Ayaan Hirsi Ali clearly suggested, it is the deep abiding hatred for Jews Muhammad instilled in Islam, which even present day Muslims “fear” rejecting, that animates both the global pandemic of extreme Muslim Antisemitism hard survey data confirm, and the relentless jihad to annihilate Jewish Israel.

Indeed, the Moroccan cleric al-Maghili (d. 1505), an important Muslim theologian whose writings influenced Moroccan religious attitudes towards Jews into the 20th century, declared in verse, “Love of the Prophet, requires hatred of the Jews.”  This animus was justified, al-Maghili averred, because the Jews repeatedly blasphemed Muhammad, and their overall conduct reflected a general hatred of Muslims. Muhammad, the sacralized jihadist prototype for all Muslims, before vanquishing  the Medinan Jewish tribe Banu Qurayza, dubbed them “brothers of apes”—apes being a Koranic epithet for Jews [Koran 2:65/ 7:166]—then personally beheaded their surrendered males, and enslaved their women and children. Al-Maghili employed this same Koranic epithet, addressing the Moroccan Jews he preyed upon as “brothers of apes,” then fomented, and lead a Muslim pogrom (in ~ 1490) against the Jews of the southern Moroccan oasis of Touat, plundering and killing them en masse, and destroying their synagogue in neighboring Tamantit.

September 622 C.E. marks a defining event in Islam—the hijra. Muhammad and a coterie of followers persecuted by fellow Banu Quraysh tribesmen, fled from Mecca to Yathrib, later known as Medina. The Muslim sources described Yathrib as having been a Jewish city founded by a Palestinian diaspora population which had survived the revolt against the Romans. The Jews of the north Arabian peninsula were highly productive oasis farmers. These Jews were eventually joined by itinerant Arab tribes from southern Arabia who settled adjacent to them and transitioned to a sedentary existence.

Following Muhammad’s arrival, he re-ordered Medinan society. The Jewish tribes were isolated, some were then expelled, and the remainder attacked and exterminated—the latter including gruesome, terrorizing political assassinations of individual Jewish leaders, as a prelude to jihad campaigns against entire communities.  Muhammad distributed among his followers as “booty” the vanquished Jews property—plantations, fields, and houses—using this “booty” to establish a well-equipped jihadist cavalry corps. For example, within a year after the massacre (in 627 C.E.) of the Jewish tribe the Banu Qurayzah, Muhammad, according to a summary of sacralized Muslim sources, waited for some act of aggression on the part of the Jews of Khaybar, whose fertile lands and villages he had destined for his followers, to furnish an excuse for an attack.

But, no such opportunity offering, he resolved in the autumn of this year [i.e., 628], on a sudden and unprovoked invasion of their territory. Ali (later, the fourth “Rightly Guided Caliph”, and especially revered by Shiite Muslims) asked Muhammad why the Jews of Khaybar were being attacked, since they were peaceful farmers, tending their oasis, and was told by Muhammad he must compel them to submit to Islamic Law. The renowned early 20th century scholar of Islam, David Margoliouth, observed aptly:

Now the fact that a community was idolatrous, or Jewish, or anything but Mohammedan, warranted a murderous attack upon it.

Finally, Muhammad’s own words have had a permanent Jew-hating eschatological (end of times) resonance with Muslims. The Muslim prophet, via a canonical hadith [Sahih Muslim, Book 41, Number 6985], declared that the Jews must be annihilated to usher in Islam’s messianic age.

“Abu Huraira reported Allah’s Messenger as saying: The last hour would not come unless the Muslims will fight against the Jews and the Muslims would kill them until the Jews would hide themselves behind a stone or a tree and a stone or a tree would say: ‘Muslim, or the servant of Allah, there is a Jew behind me; come and kill him; but the tree Gharqad would not say, for it is the tree of the Jews’.”

The iconic Shiite figure Ali’s interaction with Muhammad serves as a contemporary segue to late Ayatollah Montazeri (d. December, 2009). A Grand Marja (religious authority) of Shiite Islam, Montazeri was  considered one of the most knowledgeable senior Islamic scholars in modern Iran. (He was also deemed the much ballyhooed Iranian Green Movement’s eternal “spiritual” inspiration.) Montazeri framed the Shiite Iranian call for global jihad conquest by invoking Muhammad’s own numerous military campaigns to establish Islamic hegemony. He also shared Muhammad’s visceral, annihilationist Jew-hatred, with a complementary Shiite perspective on these motifs.

“He [Muhammad] did not sit in a corner and merely pray, although all his prayers would have been answered. On the contrary, he [Muhammad] carried out an uprising and had about 80 military clashes. He [Muhammad] called on the Muslims to arise, and he established and powerfully implemented Allah’s laws among the people.”

“…[T]hrough a billion strong march by all the Muslims of the world, we can liberate beloved Jerusalem, destroy usurping Israel, and place the destiny of Islam and the Muslims in their own hands…His Excellency [the sixth Shi‘ite Imam Ja’far] al-Sadiq affirmed thrice that those who will ultimately exterminate the Jews will be the clerics of [the Iranian Shiite shrine city of] Qom”