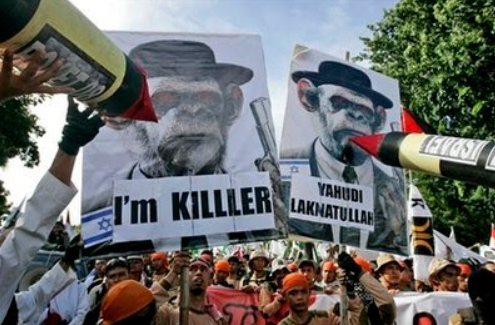 “We don’t want you to use your kippah in this country [Indonesia]. If you continue to use it, we’ll kill you.”

—Threat to the barely ~200 Asian descent Jews in Indonesia, the world’s largest Muslim nation with 229 million Muslims, deemed “tolerant and moderate”, and exhibiting only an average level of extreme Antisemitism (48%) vis-à-vis the world’s Muslims.

The iconic Jewish conservative media figure Mark Levin recently devoted air time (here; starting at 1 hr 43 mins 4 secs) to a discussion of the Antisemitism expressed by Muslima Rep. Ilhan Omar. While I commend Mr. Levin for simply acknowledging this ugly phenomenon, his exploration of the matter did more to obfuscate, than educate.

The approach to the question of Omar’s Antisemitism adopted by Levin was rather warped. Absent any Jews who have studied the Islamic ideological drivers and/or manifestations of Muslim Antisemitism, not to mention being its target, Levin’s audience was only allowed to understand the Islamic Jew-hatred Ilhan Omar embodies through the bowdlerizing prism of a self-designated “Muslim reformer,” who is actually an apologist/revisionist (here; here). As a result, no basic orienting information was imparted to Levin’s sizable radio audience. Neither the overwhelming scope, and intensity of Muslim Jew-hatred—now a global pandemic, documented by hard polling data—nor its intimate nexus to canonical Islam as promulgated by Islamdom’s most important religious teaching centers, were illuminated. Sadly, Levin clung to this presentation format—well below accepted fair play standards for honest, informed discourse—after Zionist Organization of America President Mort Klein’s courageous, landmark testimony before the House Judiciary Committee, April 9, 2019.

Mort Klein’s revelations contrasted starkly with the scrupulous avoidance of global data on the prevalence of extreme Muslim Jew-hatred, and doctrinal dissimulation proffered by the Muslim apologist Levin chose to showcase. At one point, dramatically holding a graphic display aloft, Klein’s evidence-based Congressional testimony  highlighted unique worldwide data compiled by the Anti-Defamation League (ADL) on extreme Antisemitic attitudes. The ADL, between 2014 and 2017, completed international and regional surveys recording the prevalence of those who agreed with six or more of eleven Antisemitic stereotypes, indicating extreme Antisemitism. These findings were depressingly consistent, revealing a remarkable 2 to 4.5-fold excess of Muslim Jew-hatred, juxtaposed to all other major religious affiliations, or those professing no religious belief. Moreover, equally disproportionate Muslim Jew-hatred extended to the diaspora populations in Western Europe, and the U.S.  Key summary results, included:

Earlier independent Pew polling data reported in 2011, were consistent with these ADL findings documenting the global pandemic of conspiratorial Muslim Jew-hatred, which includes a notion that has flourished across Islamdom, promoted by institutional Islam, including within the U.S.:  the cataclysmic 9/11/2001 jihad terror attacks were a “Zionist/Jewish” plot. Pew’s 2011 report showed, uniformly, that less than 30% of Ilhan Omar’s co-religionists, both Arab and non-Arab Muslims, from a “maximum” of 28% of Lebanese Muslims, to merely, 9%, 12%, and 20% of Muslims from Turkey, Pakistan, and Indonesia, respectively, acknowledged that Arab Muslims were responsible for the 9/11/2001 jihad carnage.

Returning to Klein’s 4/9/2018 Congressional testimony, it also obliterated the most profound, rigidly enforced taboo preventing honest discussion about the phenomenon of Muslim Antisemitism: the “sacralized” deep-rootedness of this hatred within traditional Islam. Klein introduced the Antisemitic themes from canonical Islam—the Koran, and the traditions of Islam’s prophet Muhammad (the “hadith”)—as preached, most importantly, by Sunni Islam’s Vatican, Al-Azhar University, and its Grand Imam Papal equivalents. Since the advent of Islam, till now, these incessantly repeated Antisemitic themes, have been responsible for inculcating Jew-hating attitudes among the Muslim masses.

Muhammad Sayyid Tantawi (d. 2010), the late Grand Imam of Al-Azhar, was appositely  singled out by Klein. One of the most revered modern authorities on Koranic “tafsir”, or exegesis, Tantawi edited a massive 15-volume modern Koranic commentary, and helped oversee the largest online website of such studies on the Koran. Tantawi’s own “Banū Isrāʼīl fī al-Qurʼān wa-al-Sunnah,” or “Jews in The Koran and The Traditions”, is modern Islam’s Koranic Kampf on the Jews. His magnum opus, this 766 page pious Muslim academic religious treatise, includes the following summary rationalization for Muslim Jew-hatred, gleaned from Tantawi’s authoritative Koranic analyses:

[The] Koran describes the Jews with their own particular degenerate characteristics, i.e. killing the prophets of Allah [see Koran 2:61/ 3:112 ], corrupting His words by putting them in the wrong places, consuming the people’s wealth frivolously [4:161], refusal to distance themselves from the evil they do [3:120; 5:79], and other ugly characteristics  caused by their deep-rooted (lascivious) envy [2:109]…only a minority of the Jews keep their word…[A]ll Jews are not the same. The good ones become Muslims [Koran 3:113], the bad ones do not.

Klein’s testimony also alluded to Tantawi’s successor, current Al-Azhar Grand Imam Ahmed al-Tayeb, who shares Tantawi’s virulent Jew-hatred. Al-Tayeb has designated the Jews eternal Koranic enemies (per Koran 5:82), claimed Jews are responsible for the rise of ISIS and other jihadist groups, and insists “the issue of Antisemitism is a lie.” Lastly, Al-Azhar University’s representative in the U.S., and Imam of the Islamic Cultural Center and Mosque of New York City, at the time of the September 11, 2001 attacks, Egyptian Sheikh Muhammad Al-Gamei’a provided a very concrete and disturbing example of the authoritative Al-Azhar Islamic mindset exported to America. Interviewed for an Al-Azhar University website, on October 4, 2001, Sheikh Gamei’a returned to Egypt after 9/11/2001 alleging, without any substantiation, that he was being “harassed.” Gamei’a’s interview was rife with conspiratorial Islamic antisemitism (original Arabic; extracts translated here), Riveting upon his invocation of the central Koranic motifs of Jew-hatred, Gamei’a concluded that Jews (whom he equated with Zionists) “plotted and planned” the 9/11 jihad carnage.

Pre-eminent Western and Iranian academics and theologians have designated Muhammad Husayn Tabatabai (d. 1981) the leading modern Shiite religious scholar and philosopher, dubbing him a “theosopher.” Tabatabai’s “The measure of balance/justly held scales in the interpretation of the Quran,” is regarded as the most important 20th century Shiite Koranic commentary. Allameh [=most esteemed Shiite cleric] Tabatabaei [Tabatabai] University, named in honor of this celebrated Shiite authority and “theosopher,” is the largest specialized state social sciences university in Iran and the Middle East, with 17,000 students and 500 full-time faculty members. Affirming his post-humous lofty stature, and relevance, an Iranian national conference was held on May 3, 2012, in Qom, dedicated to “recognizing the interpretative methods and principles used by Allameh Tabatabaee [Tabatabai] in [his Koranic] exegesis.” Modern doyen of Shiite Koranic exegesis, and “theosopher,” Allameh Tabatabai provided this gloss on Koran 5:82, which, as current Sunni Grand Imam of Al-Azhar Ahmed al-Tayeb averred in 2013, remains the central Koranic verse defining Islam’s eternal attitudes towards Jews, and Judaism:

[T]he Jews, although they had the same alternatives as the Christians, and they could retain their religion with payment of the jizyah [humiliating Koranic poll tax, per verse 9:29], yet they continued in their haughtiness, became harder in their bigotry, and turned to double dealing and deception. They broke their covenants, eagerly awaited calamities to befall the Muslims and dealt to them the bitterest deal…[T]he enmity of the Jews…toward the divine religion [Islam] and their sustained arrogance and bigotry, have continued exactly in the same manner even after the Prophet… These unchanged characteristics…confirm what the Mighty Book [the Koran] had indicated.

Both contemporary Al-Azhar University clerics and avatars of authoritative Shiite Islam (notably “moderate,” “Green Movement inspiration,” Ayatollah Montazeri), in conclusion, also preach the canonical tradition (“hadith”) expressed by Islam’s Jew-hating prophet Muhammad that the mass annihilation of the Jews is required to usher in the messianic age for Muslims. Renowned Islamic scholar Moshe Sharon has lamented the ubiquitous present day declaration of this canonical Islamic call to genocide (including within the U.S.; 2007–2018):

Not one Friday passes without this hadith being quoted in sermons from one side of the Islamic world to the other.

But for the evolution of the Israel Defense Forces as a courageous and effective military organization, the Jew-annihilationist aspirations of the global Muslim umma—animated by Islam’s quintessential, “sacralized” ideologies of jihad and Jew-hatred—would be fulfilled in the Middle East, and perhaps worldwide.

No Muslim apologist/revisionist should be granted unopposed license to obscure this hideous reality, especially under the auspices of an influential Jewish conservative media icon like Mark Levin. Genuine Muslim mea culpa is required—and must be demanded—in lieu of such dishonest and disorienting fog generation. Mr. Levin should study and ponder an example of sincere contrition for, and rejection of, Islam’s canonical Jew-hatred, and the virulent Muslim Antisemitism it engenders, provided by the Somali ex-Muslim conscientious objector to Islam, Ayaan Hirsi Ali. Upon receipt of the American Jewish Committee’s 2006 “Moral Courage Award,” Ayaan was unabashed in identifying Islam as the overriding source of pervasive Muslim Jew-hatred:

When my half-sister told me The Holocaust was the best thing that had happened to Jews, I refrained from arguing with her because I did not wish to risk breaking the family ties. When she showed me holy [Koranic] verses to support her hatred of Jews I feared arguing with Allah for Allah would burn me…I am ashamed of my prejudices against you in the past…The tragedy is however that those [Muslims] unlearning to hate are far fewer in number than those who still do. As we sit here thousands, perhaps millions are learning to blame you and wishing to destroy you.

Ultimately, institutional Islam must be compelled to undergo a wrenching, mea culpa-based rejection of its core Jew-hating ideology. The living template for such a frank transformation is Catholicism’s Vatican II/Nostre Aetate process, still underway over a half century later. As illustrated by two sentences from a pronouncement issued October 28, 1965, The Church unambiguously condemned Antisemitism:

Moreover, mindful of her [Catholicism’s] common patrimony with the Jews, and motivated by the gospel’s spiritual love and by no political considerations, she deplores the hatred, persecution, and displays of Antisemitism directed against the Jews at any time, and from any source

In 1996, Catholic Theologian John T. Pawlikowski, observed (from the essay collection, aptly entitled, Removing Anti-Judaism from the Pulpit), that the ideals nobly articulated by this pronouncement were advanced only when The Vatican Council,

As Dr. Pawlikowski characterized it, the “Phase I cleansing” stage in this overall process involved

…the removal from mainline Christian educational texts of the charge that Jews collectively were responsible for the death of Jesus, that the Pharisees were the arch enemies of Jesus and spiritually soulless, that Jews had been displaced by Christians in the covenantal relationship with God as a result of refusal to accept Jesus as the Messiah, that the “Old Testament” was totally inferior to the New and that Jewish faith was rooted in legalism while the Christian religion was based on grace.

Prevailing, shamefully, till now, the polar opposite “accepted standard” facilitates open promulgation of Jew-hatred from Islam’s canonical texts, by the creed’s  leading teaching institutions, and most authoritative religious leaders. The virulently Jew-hating, replacement theology themes Vatican II/Nostre Aetate explicitly rejected and sought to purge from Christianity, remain triumphantly preached, unchallenged, within their own unique mainstream Islamic framework by the leading institutional and clerical pillars of Sunni and Shiite Islam.

Alternatively, giving voice to those like Mort Klein, and myself, would help educate Mark Levin’s large audience about the true nature and ubiquity of Islamic Antisemitism, and the urgent, if colossal effort needed to begin to combat it.