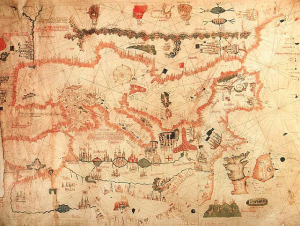 Eurabian dhimm­itude illustrated—Cover art for the Report by the High-Level Advisory Group established at the initiative of the President of the European Commission, “Dialogue between Peoples and Cultures in the Euro-Mediterranean Region,” Brussels, October 2003, As the report observed, “The orientation of this map corresponds to the world view of the Arab cartographers [i.e., Idrisi, from 1154 C.E.] of the Middle Ages”—that is, reinforcing Islamic jihad supremacism, and reversing the true geographical orientation of the Mediterranean Sea, with the North African Mediterranean littoral on top of the Southern European Mediterranean littoral.